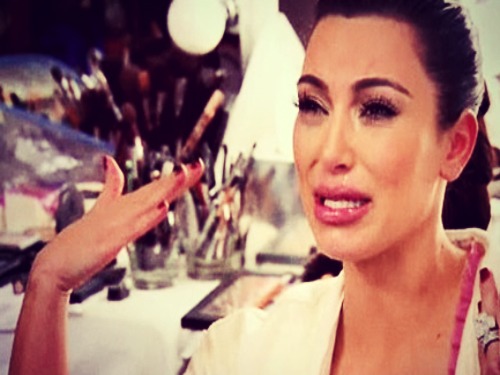 Maybe “obsessed” is too strong of a word. Maybe the phrase “constantly tolerate” is better.

Why are we constantly inundated with Kardashian stories in the media?

It’s a valid question, since this vapid, talentless group of people most well-known for strutting around half naked take up more headlines than actual relevant events which could potentially matter to a person’s daily life.

And yet, somehow they got their own show: Keeping up with the Kardashians. Now who would really want to do that for any extended period of time? No really, why? That’s like keeping up with watching a group of squirrels play on the fence in the backyard. It’s cute for about two seconds, then it gets boring and you just have to move on. (Actually, maybe that’s unfair to squirrels.)

Even news anchors are tired of reading teleprompters which dedicate any serious length of time to these people:

“I can’t take any more Kardashian stories on this show!” he says, walking off set in protest…

Yeah. Tell the rest of the country about it.

So, two reasons why the loonies in charge have decided to dedicate so much precious airtime to this waste of it family:

A) They don’t have the next false flag or hoax fully lined up yet, so they throw a Kardashian in front of the camera.

Possible, but there are lots of distractions out there. We live in the digital information age, after all.

B) They wanted a good solid, couple-years-long, highly publicized lead-up to Bruce/Caitlyn Jenner’s big unveiling so Caitlyn would have a reason to be known to the world enough to dominate as many headlines as she has been able to during her “transformation” in order to push an agenda. 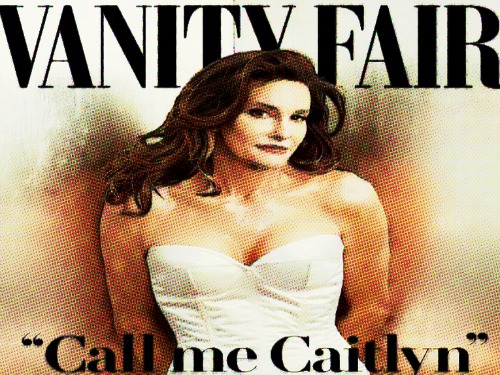 How long did Bruce/Caitlyn dominate the news after that? Months? Even now? Here’s a news story about Caitlyn Jenner from 13 hours ago. Is she that much of a cultural icon we need to hear her every waking thought?

This is about an agenda.

And before the politically correct crowd cries “sexism,” merely pointing this out has nothing to do with whether or not a transgender person decides to make a change that makes him or her happy. I make decisions that make me happy about who I am all the time. They aren’t national news for a year.

No, this is about pushing role reversal on the masses, an occult worship of androgyny and duality.

As stated above, Jenner’s transformation was not intimate nor personal. It was a grand, ceremonial, ritualistic event that symbolizes a change in society as a whole. An important part of the elite’s agenda is to debase, confuse and mix up the natural, harmonious order of things. It is about steering away from what is real, pure and authentic to move towards to the fake, artificial and the constructed. For this reason, there one aspect of the Agenda that is becoming increasingly apparent : The feminization of the male and the masculinization of the female. Under the guise of “empowerment”, men who act like females and females who act like men are not only accepted, but celebrated. I personally do not have a problem with that. I DO have a problem with the other side of this agenda: Men who act like traditional men (and do not feel the need to apologize for it) are now portrayed as evil and wrong. And, all of a sudden, portraying a stay-at-home mom who takes pride in cooking for her family is considered “sexist”.

In other words, it is about a complete reversal of gender roles. Simply by looking at our genetic make-up and the behavior of most mammals, one can observe that males are engineered to hunt, provide and protect while females are made to “nest”, care and nurture, While modern living has made these traits less dominant, they are nevertheless part of our core being. And mass media is heavily focusing on promoting the exact opposite of this. It is about the attacking the mind with messages that conflict with our natural inclinations. If you look at what is happening right now in mass media, you have, on one side, the head of the Kardashian family putting on makeup and wearing dresses while, on the other side, you have Taylor Swift training for combat with big weapons, with a gang of tough, violent women (see the video for Bad Blood).

And the people running things are ramping it up into overdrive, practically forcing this agenda down your throat as we speak.

Laws are being passed. Right now, in a country where we used to have the First Amendment right to offend, if you merely offend a transgender person in New York City, you could be fined $250,000. Drunk drivers who commit vehicular manslaughter don’t have to pay that big of a fine.

People are being told they have to share bathrooms and locker rooms with anybody for any reason. How, as a society, are we supposed to explain to a six-year-old little girl why a gender confused middle aged man with breasts is trotting around the locker room naked? Why, as a society, isn’t the little girl given more legal protection than the grown man?

Houston recently repealed a law which actually had several very good discrimination protections in it for veterans etc., but voters said no way. Why? They didn’t want to have to share public restrooms with anybody anywhere any time.

The agenda, however, will continue… whether you like it or not. That’s why every time I turn on Amazon to buy a movie, for the last year all I’ve seen first and foremost is promos for the show Transparent which even has an episode called “New World Coming”.

Can you guess what it’s about? 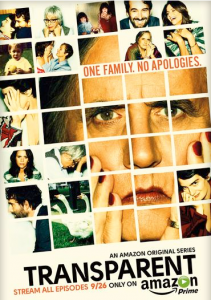