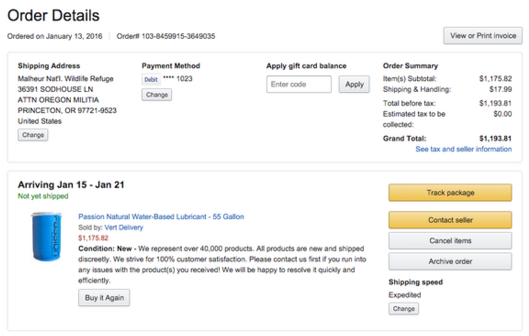 The situation at the Oregon wildlife refuge stand off is getting… rather ridiculous. From stories of co-opting, to in-fighting, to provocatuers including the FBI jaunting around pretending to be militiamen (as they always do in these kinds of situations), to the slanting of the establishment media, it’s hard to know what is really going on up there.

With temps below freezing even during the day at the Malheur National Wildlife Refuge, many have shown support by sending food and supplies to the militia holding out there. Others have decided to actually take the time out of their day to spend money to send pranks, like sex toys.

Jon Ritzheimer recently showed a pile of this stuff off in a video about the mail the group had received.

Well, in response to that, the ante just got upped.

Max Temkin, creator of Cards Against Humanity, just purchased $1200 worth of personal lubricant and sent it to the refuge with expedited shipping, then posted the receipt on Twitter.

That guy wanted to make a statement bad enough he spent $1200 to do so.

Then again, it has been pointed out that there is something ironic about a group protesting the federal government who asks people to send them stuff through… the federal postal service.

Even from an alt. media standpoint, it’s tough to know who to trust here… While government land grabs are entirely out of control, the refuge takeover really does seem like a hasty provocateur’s way to handle things. Does it discredit the militia movement? Time will tell, but so far, the events in Oregon aren’t garnering the kind of “support” they’d apparently like…

Still, it’s a sad statement on things that the thought of someone standing up for their freedom in this country is treated with ridicule from the adult equivalent of playground bullies with credit cards.