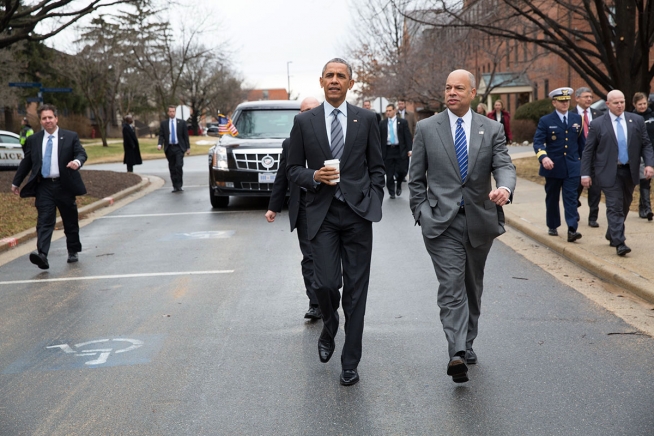 WASHINGTON D.C. (INTELLIHUB) — A new bombshell report written by Jerome Corsi suggests that President Barack H. Obama’s passport records were likely ‘sanitized’ by the acting Director of the Central Intelligence Agency John Brennan, leading up to the 2008 presidential election, after Brennan achieved the status of Director of the National Counterterrorism Center under the Bush Administration until Aug. 1, 2005.

That’s right, the sleazeball may be the one almost solely responsible for allowing an illegal foreign entity, i.e. Barry Soetoro, A.K.A. Barack Hussein Obama, to ‘salt,’ sprinkle, his way into the White House under CIA direction thus reacquiring full control of the helm from the CIA ran Bush Administration. You see, it was nothing more than a passing of the baton–it’s so simple.

And if you think I’m joking I’m not. This is how business has been done for years, ever since John F. Kennedy was taken out of the picture on Nov. 22, 1963.

But what is even more shocking about all of this is the fact that the late Michael Hastings, a renown investigative journalist who covered hardcore national security issues, was actually working on a major exposé before his death at the age of 33 that would have ultimately exposed the Obama-Brennan CIA connection and Obama’s rise to power.

Additionally Corsi points out that Hastings‘ autopsy results, taken months after his death, yielded only mild traces of marijuana and amphetamine, not enough to make him lose control of his vehicle.

Hastings died when his Mercedes, traveling at a high rate of speed, crossed into the median on a deserted Highland Avenue at 4:20 a.m. and struck a tree. The automobile burst into flames, charring Hastings’ body so badly that it took several days to make a positive identification.

Los Angeles newspapers have suggested Hastings had become obsessed with Edward Snowden’s revelations about the National Security Agency’s massive domestic surveillance capabilities and with disclosures the Department of Justice had obtained of the phone records of Associated Press reporters.

His neighbor and close friend, Jordanna Thigpen, told the LA Weekly that just before his death, Hastings’ behavior had become erratic because of his increasing concerned that helicopters commonly seen in the Hollywood Hills were spying on him and that his Mercedes had been tampered with.

“He was scared, and he wanted to leave town,” Thigpen told the newspaper.

Could Hastings have been killed by factions of the Obama Administration or the CIA?

Your Democratic Commander-In-Chief, the 44th President of the United States of America, Barack Hussein Obama, if that’s even his real name, still has the whole of America in his sights after already pulling the trigger by way of stealth early on in his presidency having every intention of decimating the God-given freedoms our forbearers once instilled at great cost.

Shortly after Obama’s inauguration, unleashing a surprise tsunami upon free America, the President and key members of his staff made a massive push toward communism starting with the first stroke of Obama’s presidential pen–literally.

On Jan. 21, 2009, one day after the presidential inauguration ceremony Obama signed Executive Order 13489 permanently sealing off any and all records about his person including ones that show his involvement with certain friends, colleagues, the Central Intelligence Agency (CIA) and anything to do with the origin of his actual birthplace.

As Mychal Massie would write, “It is inconceivable to believe that Obama, Bill Ayers and his wife, Bernadine Dohrn, would be the close friends they are unless they shared the same ideologies,” it’s also important to point out how his [Obama’s] true roots are grounded in communism while his drive to destroy the homeland stems from his employment at the CIA and his long-term objective as a paid operative.

Although it’s nice to believe that we as U.S. citizens actually elect the president the harsh reality is that the President and members of his staff are selected by the powers-that-be and moreover are even groomed from young ages to one day meet their final objectives through incrementalism, agency, group-oriented goals, whatever they may be at the time.

Just like George H.W. Bush, the 41st U.S. President, was also Director of the CIA back in the 70’s under President Ford, other Presidents and members of their staffs have also had ties to the CIA; Barack Obama being one of them.

In fact, shockingly, in a 2011 True News interview, a man by the name of Al, who identified himself as a debt collector, publicly brought forth information damning to Obama; information that linked him to the CIA also exposing part of Obama’s dark shady past.

The information, pulled from a common skip-tracing procedure, showed how a previous neighbor of a Chicago debtor in question was in fact Michelle Obama, Barack Obama’s purported wife.

Out of curiosity Al reportedly clicked on the link under Michelle’s name which than pulled up Barack Obama’s name and “home address”, listed as “5046 S. Greenwood Ave.”, which strangely enough was actually owned by Barack Obama’s accountant at the time.

Upon further investigation six different SSN numbers were also assigned to the property over only a six-year span.

“Fifty-two” former addresses of Obama allegedly were displayed as well.

Coupled with other evidence, Al said that he believes that this type behavior signifies what is known as a “multi-layered” real estate finance transaction. And if Al is right, this suggests real estate fraud at minimum. Moreover it signifies that Obama’s “home address” was a safe house bought and paid for by the CIA.

This all dovetails with Obama’s forged “Certificate of Live Birth” which remains ‘digitally layered,’ posted on the official White House website, in PDF form, still to this day.

Mike Zullo, the posse’s chief investigator, said numeric codes on certain parts of the birth certificate indicate that those parts weren’t filled out, yet those sections asking for the race of Obama’s father and his field of work or study were completed.

Zullo said investigators previously didn’t know the meaning of codes but they were explained by a 95-year-old former state worker who signed the president’s birth certificate. Zullo said a writer who published a book about Obama’s birth certificate and was aiding investigators let them listen in on an interview he conducted of the former state worker.

Now others are taking note of Obama’s dark shady past and how he was influenced by a communistic ideology at a such a young age. Even the former Mayor of New York City (1994-2001) Rudy Giuliani has become quite outspoken on the issue despite death threats.

“From the time he was 9 years old, he was influenced by Frank Marshall Davis, who was a communist,” Giuliani said. The ex-mayor added that Obama’s grandfather introduced him to Davis, a writer and labor activist.

Giuliani also said another bad influence on Obama was Saul Alinsky, a community organizer whom the ex-mayor called a “socialist.”

The man once called “America’s mayor’’ also sharply criticized the president for having been a member of a church led by radical Chicago Rev. Jeremiah Wright.

“He spent 17 years in the church of Jeremiah Wright, and this is the guy who said ‘God damn America, not God bless America,’ ’’ Giuliani said.

Giuliani said Obama doesn’t measure up to past presidents.

“He doesn’t talk about America the way John Kennedy and Ronald Reagan did, about America’s greatness and exceptionalism,” said Giuliani.

“He was educated by people who were critics of the US. And he has not been able to overcome those influences.”

Now some, like myself, believe that Giuliani may be right when he said, “Somebody has to raise these issues with the president. Somebody has to have the courage to stand up.” After all only a handful of people are actually, out in the open, on the front lines of the information war, risking life and limb. Without them we wouldn’t stand much of a chance as people seem to be more infatuated with the Super Bowl, videogames, and the latest reality show.

While I assure you this has all been created by design, we as free-thinking individuals must be aware of pressing issues that are surely to strip any and all notations of freedom right out from underneath us either now or in the future.

Remember if you don’t use it you will lose it. We are now in the eleventh hour as the proverbial hammer is about to be dropped, flattening the American dream that our forbears all died for.

What are you going to do to stop it?