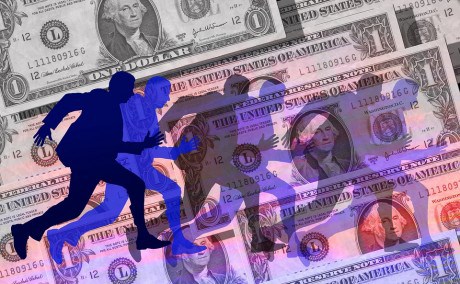 Last time around it was subprime mortgages, but this time it is oil that is playing a starring role in a global financial crisis.  Since the start of 2015, 42 North American oil companies have filed for bankruptcy, 130,000 good paying energy jobs have been lost in the United States, and at this point 50 percent of all energy junk bonds are “distressed” according to Standard & Poor’s.  As you will see below, some of the big banks have a tremendous amount of loan exposure to the energy industry, and now they are bracing for big losses.  And the longer the price of oil stays this low, the worse the carnage is going to get.

Today, the price of oil has been hovering around 29 dollars a barrel, and over the past 18 months the price of oil has fallen by more than 70 percent.  This is something that has many U.S. consumers very excited.  The average price of a gallon of gasoline nationally is just $1.89 at the moment, and on Monday it was selling for as low as 46 cents a gallon at one station in Michigan.

But this oil crash is nothing to cheer about as far as the big banks are concerned.  During the boom years, those banks gave out billions upon billions of dollars in loans to fund exceedingly expensive drilling projects all over the world.

Now those firms are dropping like flies, and the big banks could potentially be facing absolutely catastrophic losses.  The following examples come from CNN…

For instance, Wells Fargo (WFC) is sitting on more than $17 billion in loans to the oil and gas sector. The bank is setting aside $1.2 billion in reserves to cover losses because of the “continued deterioration within the energy sector.”

JPMorgan Chase (JPM) is setting aside an extra $124 millionto cover potential losses in its oil and gas loans. It warned that figure could rise to $750 million if oil prices unexpectedly stay at their current $30 level for the next 18 months.

Citigroup (C) built up loan loss reserves in the energy space by$300 million. The bank said the move reflects its view that “oil prices are likely to remain low for a longer period of time.”

If oil stays around $30 a barrel, Citi is bracing for about $600 million of energy credit losses in the first half of 2016. Citi said that figure could double to $1.2 billion if oil dropped to $25 a barrel and stayed there.

For the moment, these big banks are telling the public that the damage can be contained.

But didn’t they tell us the same thing about subprime mortgages in 2008?

We are already seeing bank stocks start to slide precipitously.  People are beginning to realize that these banks are dangerously exposed to a lot of really bad deals.

If the price of oil were to shoot back up above 50 dollars in very short order, the damage would probably be manageable.  Unfortunately, that does not appear likely to happen.  In fact, now that sanctions have been lifted on Iran, the Iranians are planning to flood the world with massive amounts of oil that they have been storing in tankers at sea…

Iran has been carefully planning for its return from the economic penalty box by hoarding tons of oil in tankers at sea.

Now that the U.S. and European Union have lifted some sanctions on Iran, the OPEC country can begin selling its massive stockpile of oil.

The sale of this seaborne oil will allow Iran to get an immediate financial boost before it ramps up production. The onslaught of Iranian oil is coming at a terrible time for the global oil markets, which are already drowning in an epic supply glut.

Just the other day, I explained that some of the biggest banks in the world are now projecting that the price of oil could soon fall much, much lower.

But the truth is that the price of oil does not need to go down one penny more to have a catastrophic impact on global financial markets.  If it just stays right here, we will see an endless parade of layoffs, energy company bankruptcies  and debt defaults.  Without any change, junk bonds will continue to crash and financial institutions will continue to go down like dominoes.

We are already experiencing a major disaster.  Things are already so bad that some forms of low quality crude oil are literally selling for next to nothing.  The following comes from Bloomberg…

Oil is so plentiful and cheap in the U.S. that at least one buyer says it would pay almost nothing to take a certain type of low-quality crude.

Flint Hills Resources LLC, the refining arm of billionaire brothers Charles and David Koch’s industrial empire, said it offered to pay $1.50 a barrel Friday for North Dakota Sour, a high-sulfur grade of crude, according to a corrected list of prices posted on its website Monday. It had previously posted a price of -$0.50. The crude is down from $13.50 a barrel a year ago and $47.60 in January 2014.

While the near-zero price is due to the lack of pipeline capacity for a particular variety of ultra low quality crude, it underscores how dire things are in the U.S. oil patch.

A chart that I saw posted on Zero Hedge earlier today can help put all of this into perspective.  Whenever the price of oil falls really low relative to the price of gold, there is a major global crisis.  Right now an ounce of gold will purchase more oil than ever before, and many believe that this indicates that a new great crisis is upon us…

The number of barrels of oil that a single ounce of gold can buy has never, ever been higher.

All over the planet, big banks are absolutely teeming with bad loans.  And to be honest, the big banks in the U.S. are probably in better shape than some of the major banks in Europe and Asia.  But once the dominoes start to fall, very few financial institutions are going to escape unscathed.

In the coming days I would expect to see more headlines like we just got out of Italy.  Apparently, Italian banks are nearing full meltdown mode, and short selling has been temporarily banned.  To me, it appears that we are just inches away from full-blown financial panic in Europe.

However, just like with the last financial crisis, you never quite know where the next “explosion” is going to happen next.

But one thing is for sure – the financial crisis that began during the second half of 2015 is raging out of control, and the pain that we have seen so far is just the beginning.