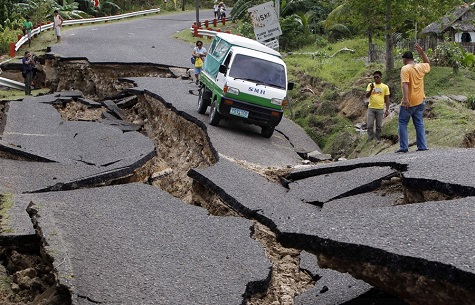 We live in a world where a rumor spread online is enough to set whole swaths of the population into total panic, regardless of whether or not that info is fact or fiction. Twitter rumors have caused bank runs in multiple countries now, for example. This is just the times we’re living in.

Well this week, after two large volcanoes erupted which forced 1,200 Indonesians to flee their homes, it was reported that an ocean buoy showed a sharp water level drop in one area. The report went on to say this reading proved that the Juan de Fuca Plate suddenly shifted eastward without warning and slipped below the North American Plate.

“This type of event is usually followed by a massive upward movement of the North American Plate causing a very severe earthquake. If such a thing were to happen today, thousands of people would be killed as a wall of water came ashore well inland passing Interstate 5 and destroying everything in its path from the beach to Interstate 5. This type of Tectonic Movement has a direct effect upon the volcanoes in the Cascadia Volcanic Chain, in particular, Mount Hood,” the report claimed. (source)

The report was shared all over the Internet by people who do not even realize the buoy reading was so drastic, it might just be a mechanical glitch.

“Just like seismometers, what you see on one instrument is hugely considered unreliable and no other instrument showed anything, and the people watching these instruments immediately flagged it to ignore because it’s so unlikely to be real,” John Vidale, a seismologist and director of the Pacific Northwest Seismic Network, explained. (source)

That didn’t stop people from freaking out en masse all over the web that the entire American Northwest was about to face certain doom in a geologic holocaust.

It’s as if no one has ever heard of Occam’s razor these days. It’s as if humanity has been socially engineered at this point to automatically accept the most horrifying (and thus, improbable) outcome as the eventuality.

Not that we shouldn’t be prepared in case an earthquake does occur, considering somewhere on the planet an earthquake is likely happening as I type this and they can be deadly and destructive.

I guess it’s just astounding how humanity has been bred to go from zero to nightmare in less than two seconds… so they do.