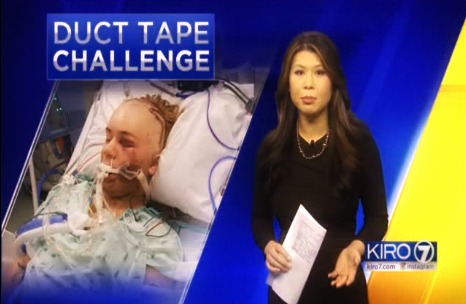 It feels like the one thing that’s truly gone viral these days is stupidity.

Even the ice bucket challenge was, admit it, stupid.

And now, because no justifiable reason whatsoever, it’s the duct tape challenge.

This is where someone duct tapes you to something and you try to escape from it.

Lots of fun. Fun like what was had by this kid who was duct taped to a pole and when he tried to escape, he fell down in one big awkward lump with no arms to stabilize himself onto a window frame, crushing his eye socket and having to get dozens of stitches in his head, which slammed into the concrete, causing a brain aneurysm.

He says he’s just lucky to be alive.

But now, for the rest of his life when people ask why he’s blind in one eye or “What happened to you?” he’s going to either have to lie or tell this story.

What will kids think of next? The rabid wombat challenge? The angry, starving cheetah challenge? Honey-soaked head ant hive challenge?