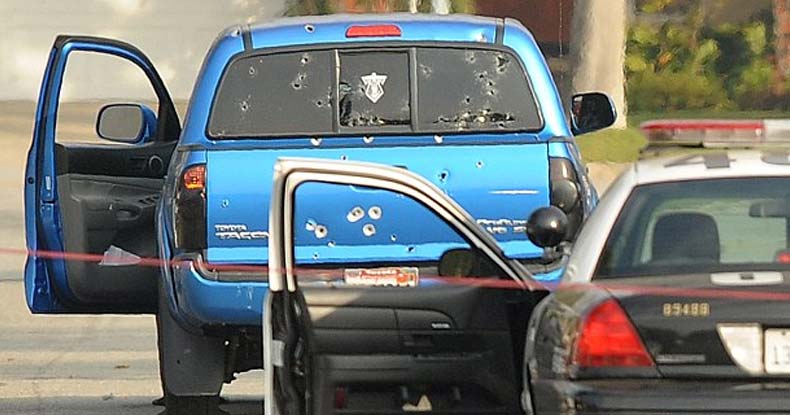 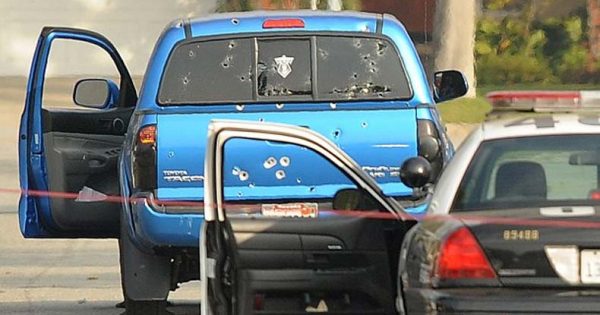 Los Angeles, CA – Exposing the double standard between police and civilians, the Los Angeles County District Attorney’s Office announced Wednesday that no criminal charges will be filed against the eight LAPD officers responsible for nearly killing an innocent woman and her daughter. Although the cops ambushed the unarmed women without warning and fired over 100 bullets without provocation, the district attorney justified the case of mistaken identity due to the fact that the officers involved were afraid and incompetent.

At 5 a.m. on February 7, 2013, Margie Carranza and her mother, Emma Hernandez, were delivering newspapers throughout a residential neighborhood in Torrance when eight LAPD cops suddenly opened fire. As Carranza suffered cuts from the flying glass, Hernandez was shot twice in the back while trying to protect her daughter. One bullet exited just above Hernandez’s collarbone, while the other bullet struck her lower back, near her spine. A fragment of shattered glass also flew into her eye.

After firing 107 bullets at the innocent women, the LAPD cops ordered them out of the vehicle and immediately realized their mistake. Instead of a 33-year-old black man, two Hispanic women exited the pickup truck and demanded to know, “Why did you shoot at us?”

Instead of rendering first aid or even apologizing for the act of attempted murder, the officers called for paramedics while refusing to offer any explanation for the ambush. Awakened by the gunfire, residents emerged from their homes to find their vehicles, houses, and front doors riddled with bullets. With five bullet holes in the entryway to his house, one neighbor asked, “How do you mistake two Hispanic women, one who is 71, for a large black male?”

Twenty-five minutes after the shooting, Torrance police officers stopped David Perdue a few blocks away as he was driving to the beach to go surfing before work. After the officers questioned him and ordered Perdue to turn around, he complied with their commands and began driving away when another Torrance police cruiser raced towards his vehicle and broadsided him. Suffering from a concussion and back pain, Perdue remained in his vehicle as an officer opened fire on him.

Although Torrance PD and LAPD were searching for a black man driving a gray Nissan Titan, Perdue is a white man who was driving a black Honda Ridgeline. Carranza and Hernandez were driving a blue Toyota Tacoma when the officers ambushed them without bothering to confirm their identities.

The officers responsible for nearly killing Carranza and her mother had been tasked with guarding the house of LAPD Capt. Justin Eisenberg. Because the police captain had been a member of the Board of Rights that voted to terminate former Officer Christopher Dorner, police suspected Dorner might attempt to kill Eisenberg or his family. The police captain was also named in Dorner’s manifesto, which he posted online after the initial murders.

In his manifesto, Dorner accused Sgt. Teresa Evans of kicking a restrained suspect named Christopher Gettler in the chest and face. After filing a complaint against Evans, Dorner was labeled a liar by the department and subsequently fired. Dorner also pointed out in his manifesto that many of the officers involved in the Rodney King beating and Rampart scandal during the 1990s have been promoted to supervisory or command positions within the LAPD and surrounding departments.

On Wednesday, the Los Angeles County District Attorney’s Office announced that LAPD officers Jess Faber, Marlon Franco, Sergio Gramajo, John Hart, Geoff Lear, Deshon Parker, Jonathan Roman, and Sgt. John Valdez would not face charges for the attempted murders of Carranza and her mother. Due to the fact that the entire police department was scared of one man and could not be held accountable for their incompetent actions, none of the officers who fired 107 bullets at two unarmed, innocent women will face prosecution. Although the women received a $4.2 million settlement and a new pickup truck, no cop will be held accountable for firing the first shot or failing to correctly identify the make/model of the vehicle along with the race and gender of its occupants.

Although LAPD Chief Charlie Beck announced during the manhunt that officials would re-examine Dorner’s allegations of police misconduct, nearly three years have passed without any results. Instead, Sgt. Teresa Evans filed a lawsuit against the LAPD last year alleging racial discrimination against her. Evans is white.

Rep Marjorie Taylor Greene Plans to File Articles of Impeachment Against Biden the Day After His Inauguration
January 15th, 2021 The Mental Recession