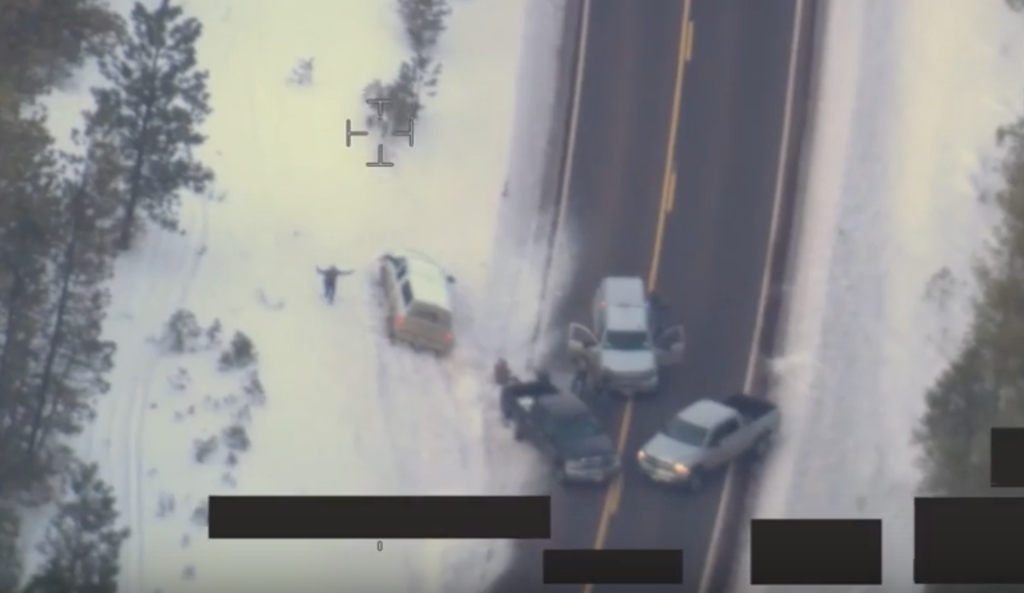 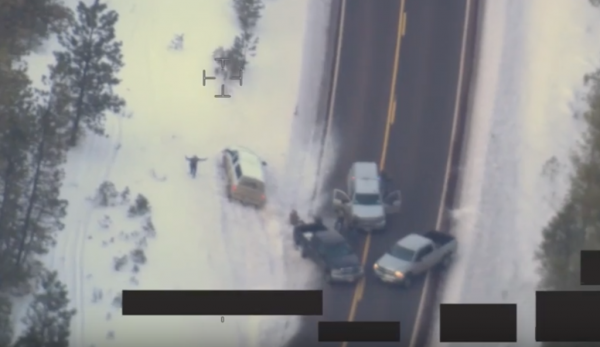 The video has been released in the shooting of LaVoy Finicum. The angle is a helicopter shot and shows Finicum driving his truck into a snow embankment.

However, what takes place is different than several stories that have been conveyed.

He was not charging the officers as Mark McConnell claimed nor was he handcuffed, so his story is bogus. Many, including myself, didn’t think what he said sounded right.

He also was not down on his knees with his hands behind his head as relayed by the wife of Ammon Bundy.

However, he clearly had his hands in the air when he exited the vehicle.

You will notice that at several points he does drop his hands. Because there is no sound, it is difficult to tell if he was responding to being shot or whether he was reaching for a sidearm.

One officer approaching from behind seems to shoot him in the back at the 0:24 second mark, as other officers are there as well. You can clearly see the snipers in the trees as well, which was relayed by Victoria Sharp. However, the video doesn’t seem to capture any of the shooting into the vehicle that she claimed took place, though it is hard to tell. At least, I can’t see it, though that could have happened during the time when the truck took off or after Finicum was gunned down. Without sound, it is impossible to determine when shots were fired or what commands Finicum was responding to.

Additionally, one should note that there was no attempt made by the officers to provide any sort of medical assistance to Finicum.

I’ll let the viewers determine whether they believe the shooting was justified or not. At this point, we need other angles to determine whether or not Finicum was responding to being shot or whether he was actually going for a gun.

The full video shows Finicum driving from the first stop. One wonders if he was shot at, as Victoria Sharp claims.

What I find interesting is that the time stamp on the video is dated January 27, the day after Finicum was killed, and the time is after midnight. Has the video been altered? Why are sections blurred? Was this some sort of re-creation? Why is there only one woman exiting the truck? There were two inside.

The FBI’s statement on the video reads:

This is the complete video footage of a joint FBI and Oregon State Police traffic stop and OSP officer-involved shooting of Robert “LaVoy” Finicum on the Malheur National Wildlife Refuge. This footage, which has only been edited to blur out aircraft information, was taken by the FBI on 01/26/2016 and released by the FBI on 01/28/2016.

I’m sure we’re going to have more questions the more the video is examined.

UPDATE: The time used in the video has been accounted for. The time setting on all military drones are for Greenwich Mean Time (ZULU), which is London UK time. That is eight hours ahead of Oregon time, so the time has been determined to be correct. (Thanks Joe!)