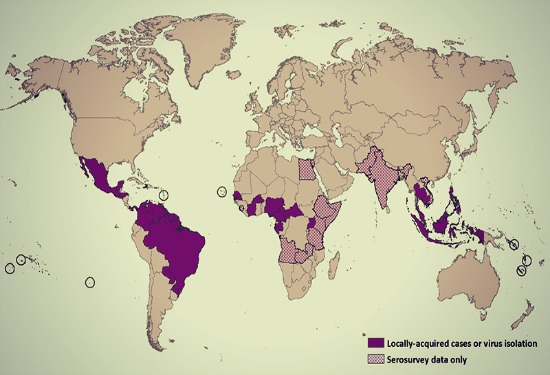 (To read about Jon’s mega-collection, Power Outside The Matrix,click here.)

It’s hysteria time again. Let me run it down for you.

This is the word: The dreaded Zika virus! Watch out! It’s carried by mosquitos! It can cause birth defects—babies are born with very small heads and impaired brains!

Here are a few scare headlines that were running on Drudge as of 1/26:

“Stay away from Rio if you’re pregnant.”

Want more hysteria? The Daily Mail indicates pregnant women are being warned not to travel to 22 countries in Latin America and Africa. Several Zika cases are being reported in Italy, the UK, and Spain.

Then we have this from the Washington Post (“As Zika virus spreads, El Salvador asks women not to get pregnant until 2018,” 1/22, with italics added):

“The rapid spread of the Zika virus has prompted Latin American governments to urge women not to get pregnant for up to two years, an extraordinary precaution aimed at avoiding birth defects believed to be linked to the mosquito-borne illness.

“…a potentially culture-shaping phenomenon in which the populations of several nations have been asked to delay procreation. The World Health Organization says at least 20 countries or territories in the region, including Barbados and Bolivia, Guadeloupe and Guatemala, Puerto Rico and Panama, have registered transmission of the virus.”

So we now have governments warning women not to get pregnant. A new form of depopulation. Don’t get pregnant. If you do, and a mosquito bites you, you could give birth to a severely damaged child. Not only that, we have massive advisories against travel, for pregnant women. And 200,000 soldiers in Brazil, the site of the upcoming Olympics, are going door to door and distributing information about this new “plague.” Are the soldiers also telling men and women not to have sex? Who knows?

So let’s take a little side trip to Scam City and examine the science behind the Zika virus and the assertion that it is causing birth defects.

Before a virus can be said to cause disease, a few procedures need to occur. First, the virus must be proved to exist. It has to be isolated from a human carrier as diseased tissue, and then that tissue has to be put under an electron microscope, where many, many (Zika) viruses can be seen. Second, tests have to be run on many suspected human cases, and these tests have to reveal very large amounts of Zika in the body. That’s your basic starter kit for deciding that a virus might be causing actual human disease.

In examining the published literature on Zika, so far I see no reports of diseased-tissue removal from a human, followed by electron microscope photos revealing large amounts of Zika.

As far as diagnostic tests on suspected human cases are concerned, I see, as usual, two major types of testing: antibody, and PCR. I’ll briefly review the egregious flaws in these tests.

Antibodies are immune-system scouts which identify invaders in the body. The antibodies ID these villains so other elements of the immune system can repel and destroy them. When a test shows that antibodies geared to a specific virus/villain (like Zika) are present in the body, it means the body has contacted that Zika virus—if the test was done well and didn’t come up with a falsely-positive result. False positives are frequent. But more disastrously, proving the body had contact with a specific virus says absolutely nothing about whether the patient is sick or will get sick. In fact, before 1985, a positive antibody test was generally taken to be a good sign: the body’s immune system had encountered and overcome the invader. After 1985, the “science” was turned upside down: a positive test meant the person was sick or going to get sick. And that meant, of course, more (false) diagnoses of disease and more profit from treatments. In announced “epidemics,” health agencies can falsely inflate the numbers of cases to the moon.

The PCR is a very sophisticated and tricky test to run. It is prone to errors. It takes a tiny, tiny amount of material assumed to be a fragment of a virus, and it amplifies (blows up) that fragment so it can be observed. The first problem with the test is: did technicians indeed choose a tiny sample that actually is a piece of the virus in question? Or is it simply a bit of genetic debris? The second problem is: the test, despite claims to the contrary, says nothing reliable about the amount of virus (like Zika) that is in the patient’s body. Why is this important? Because you need a great deal of virus in the body to begin to say it is causing disease. A very small amount is trivial.

With these two useless tests in tow—the antibody and the PCR—researchers and doctors don’t have a meaningful clue about whether a patient is ill as a result of Zika infection. All case-number reports are suspect, to say the very least.

Therefore, attributing very serious problems to Zika on a worldwide basis is insupportable and speculative. It isn’t science.

And to make the leap to claiming the virus is causing pregnant women to give birth to babies with very small heads and impaired brains is absurd.

Who benefits from this Zika “science”? Certainly, the people who are releasing genetically engineered (GE) mosquitos as a form of disease-prevention. The big honcho is a company named Oxitec. So far, the GE mosquitos are being used to curtail dengue fever in Brazil, Malaysia, and the Cayman Islands. Florida is next up on the agenda. But with Zika coming on strong in the press as a “mosquito-carried plague,” how long will it be before special bugs are modified to save the planet from this new threat…

Just a few problems with the GE mosquitos, though.

A town in Brazil has reported continuing elevated levels of dengue fever since the GE (genetically engineered) mosquitoes have been introduced to combat that disease.

The scientific hypothesis is: the trickster GE bugs (males) will impregnate natural females, but no actual next generation will occur beyond the larval stage. However, this plummeting birth rate in mosquitoes is the only “proof” that the grand experiment is safe. No long-term health studies have been done—this is a mirror of what happened when GMO crops were introduced: no science, just bland assurances.

Needless to say, without extensive lab testing, there is no way to tell what these GE mosquitoes are actually harboring, in addition to what researchers claim. That’s a major red flag.

Wherever these GE mosquitoes have been introduced, or are about to be introduced, the human populations have not been consulted for their permission. It’s all being done by government and corporate edict. It’s human experimentation on a grand scale.

There are concerns that, if indeed the dengue-carrying mosquitos are actually wiped out, the vacuum may be filled by another dengue carrier, the Asian Tiger Mosquito—which breeds much faster.

Other than that, everything is perfect. Let’s have a big parade and welcome genetically-engineered mosquitos to planet Earth.

Back to the Zika virus: what actually is causing mothers to give birth to babies with very small heads and impaired brains? If this is indeed a fairly recent phenomenon, I would start with a deep and very specific investigation of the genetically engineered mosquitos that were recently released in Brazil to decimate the dengue-fever mosquitos.

Then I would pay attention to a report like this (Rio Times, 5/5/15,“Brazil Shown to Be Largest Global Consumer of Pesticides”):

“The ABRASCO report, titled ‘An Alert of the Impacts of Pesticides on Health’, was released last week in Rio de Janeiro. The report includes scientific studies including data from the National Cancer Institute that shows a direct link between the use of pesticides and health problems.”

A quote inside the report:

“Not only are we using more [pesticides] but we are using more powerful, stronger pesticides. We have been forced to import pesticides which were not even allowed in Brazil to combat pests which attacked GM soybean and cotton plants…”

“…22 of the fifty main active ingredients used in pesticides in Brazil today have been banned in most other countries. “

How about an in-depth investigation, on the ground, probing the connection between these pesticides and birth defects?

Or is it better, for the chosen few, to use a virus as a false cover story, in order to explain away horrendous damage from what amounts to chemical warfare?

****Try this study, published in Environmental Health Perspectives on July 1, 2011: “Urinary Biomarkers of Prenatal Atrazine Exposure…”Here is a quote referring to what is now being called a prime Zika effect:

Of course, both Atrazine and metolachlor pesticides are used in Brazil. Why is this connection to birth defects being overlooked? If this is still a serious question, in this day and age, and if the answers aren’t obvious, the questioner just arrived from Pluto.

I have walked the path of making these connections since 1987. The covert op is played exactly like the old shell game. Look here, don’t look there. This is important, that means nothing.

Tons and tons and tons of various pesticides and other poisonous chemicals…but forget that, it’s all because of a virus.

“A virus” is the best false cover story ever invented.