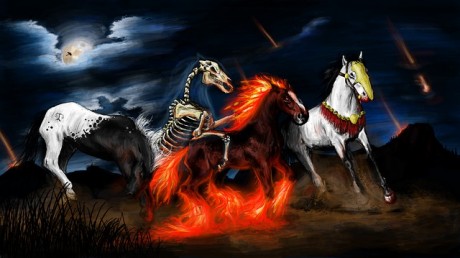 Have you ever come away discouraged after trying to talk about prepping with friends or family members that just don’t seem to be interested?  Over the years, I have heard countless excuses from people for why they aren’t getting prepared for what is about to happen to America.  Some of the excuses, like a lack of money, are definitely legitimate.  But in many other instances, the objections don’t seem to make a lot of sense.  In America today, most people let others do most of their thinking for them.  And in general, our political, religious and cultural leaders are telling Americans that there really is no reason to be overly concerned about the future.  They assure us that they have everything under control, and that life is only going to get better in the years ahead.  Bad beliefs lead to bad decisions which in turn lead to bad actions, and most Americans have chosen to believe what the elite are telling them at this point.  As a result, only a small fraction of society is getting physically, mentally, emotionally and spiritually prepared for the exceedingly hard times that are rapidly approaching.  The following are 53 common excuses that people like to use for not prepping…

1. “Obama fixed everything that was wrong with America”

2. “When Hillary Clinton is elected she will put this nation back on the right track”

4. “I don’t have to prepare because the rapture is going to happen before anything really bad happens to this country”

5. “Everybody told me that the world was going to end in September and that didn’t happen”

6. “I don’t have enough money to buy emergency food and supplies”

7. “I’m too exhausted after working hard all day to do anything else”

8. “There is never enough time, and I would rather spend my precious free time doing something else”

9. “The U.S. economy is the greatest economy in the history of the world – there is no way that it could ever possibly collapse”

10. “Whenever we have had a major economic downturn in the past we have always recovered”

11. “Things are never going to get THAT bad”

12. “When things fall apart the federal government will take care of us”

13. “I am going to spend my extra money on fun rather than on fear”

14. “While you guys are sitting on stockpiles of expired food, I will be counting all of the money that I made in the stock market”

15. “When disaster strikes I will simply steal food from everyone else that has been prepping”

16. “The people at the Federal Reserve are very highly educated and they know precisely what they are doing”

17. “Wal-Mart will always be there when I need it”

20. “It is anti-faith to get prepared for an economic collapse”

21. “If the economy does collapse, I will just go on welfare”

22. “Nobody can get prepared for every possible scenario, so why bother?”

23. “I would rather save money for retirement”

24. “Obama told me that anyone that says the economy is heading for hard times is just peddling fiction”

25. “The stock market always rebounds to new highs after every crash, so why worry?”

27. “Prepping is something that crazy people do”

29. “I am afraid that all of the food that I store is going to go bad”

30. “All of the people that got freaked out about Y2K look really foolish right about now, don’t they?”

31. “Instead of being ultra-paranoid, I would rather just enjoy my life”

32. “If things get really bad, the people in my community will just band together to take care of everyone”

33. “If society did completely collapse, I would not want to go on living anyway”

35. “If you assume that the worst is eventually going to happen, then you don’t really believe in America”

36. “If something happens I will just run out to the store and grab what I need”

37. “If all of my debts are wiped out during an economic collapse I might as well live it up now”

38. “When things hit the fan I will just go live with my relatives that have been prepping”

39. “My spouse does not believe that prepping is a good idea”

40. “Prepping seems so complicated and I don’t know where to start”

41. “I don’t have to worry about preparing for a major disaster because that is what FEMA is for”

42. “There is no way that the supermarkets could ever possibly run out of food”

43. “Once I get my student loans and credit card debt paid off then maybe I will start thinking about prepping”

44. “My relatives are already convinced that I am a nutjob – I don’t need to make it worse by stockpiling buckets of food in my garage”

46. “If there really was a reason to get prepared they would have told us about it on the news”

47. “People have been predicting doom and gloom for years, and yet nothing has happened”

48. “If I do prepare, angry mobs will just come and steal it all at some point anyway”

49. “Look at how fast technology is advancing – there is no way that things could completely fall apart now that humanity has so much advanced knowledge”

50. “We live in the greatest country on the entire planet during the greatest time for humanity in the history of the world”

51. “I have no intention of becoming a card carrying member of the Tin Foil Hat Brigade”

52. “If we are all going to die anyway, what is the point of prepping?”

If you would like to learn more about how you can get prepared for what is immediately ahead of us, you may want to check out an article that I recently did entitled “70 Tips That Will Help You Survive What Is Going To Happen To America“.  It contains quite a few little “nuggets” that many people don’t commonly think about when it comes to prepping.

Personally, I think that it would be very nice if normal life were to just continue indefinitely in America.  That way I could just sit up on my mountain and enjoy a nice quiet life with my family.

But the truth is that we are moving into the greatest time of chaos that any of us have ever experienced, and those of us that have been preparing are going to need to step forward as leaders.  It is during times of great darkness that light is needed the most, and during the hard years ahead there is going to be a crying need for people that have great strength, great courage and great love.

So do you have any excuses that you have heard that you think would make good additions to this list?  Please feel free to share them with the rest of us by leaving a comment below…