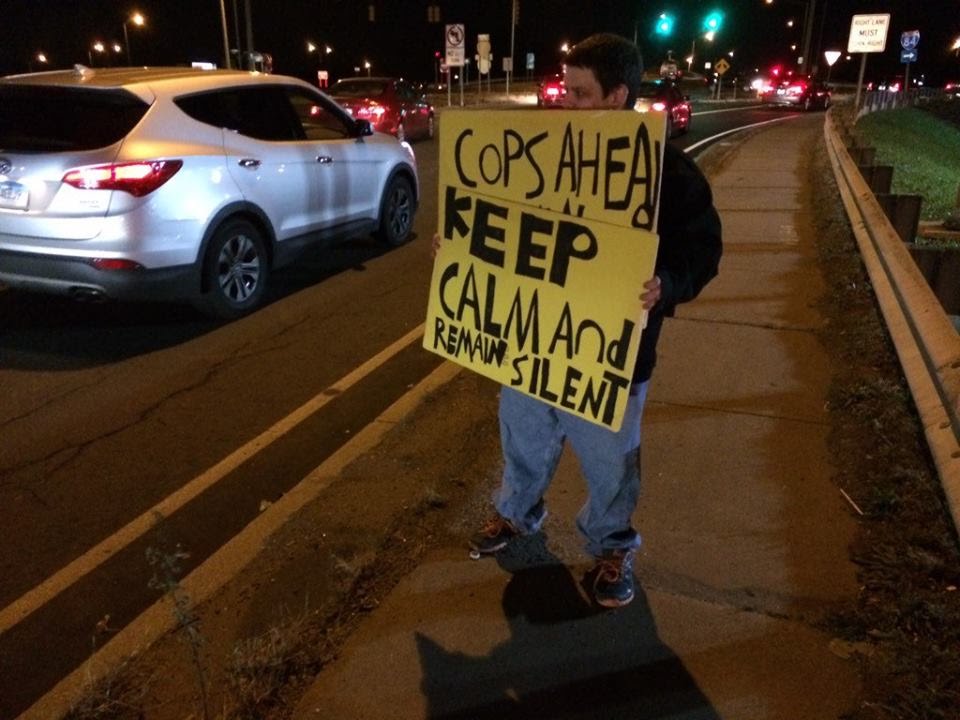 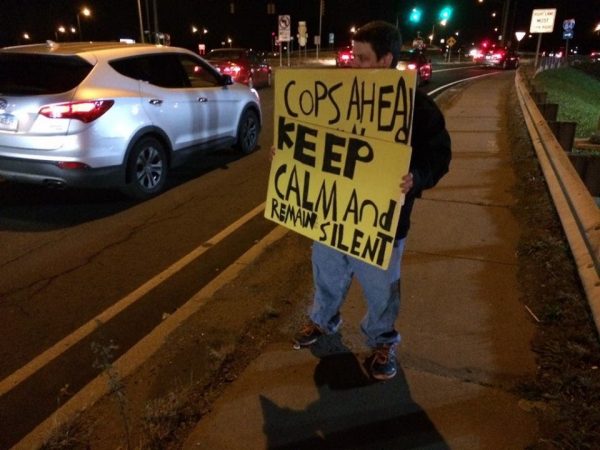 Hartford, CT — On September 11, 2015, journalist and police accountability activist, Michael Picard was illegally detained for lawfully open carrying and filming police on public property. During the illegal detainment, Connecticut state troopers confiscated his gun and his camera. However, the trooper who took the phone went on to make a critical mistake — he left the camera rolling while fabricating a story to falsely charge Picard.

The resultant footage provides a rare, behind the scenes look at what officers are capable of doing to people with whom they disagree. It is nothing short of jaw-droppingly infuriating.

On that September night, Picard and a friend were on public property and warning drivers of a DUI checkpoint ahead. They were several hundred yards from the checkpoint and not interfering at all when troopers drove up, without lights on, and against the flow of traffic, to begin harassing the two gentlemen.

Trooper First Class John Barone, Sergeant John Jacobi, and Trooper Jeff Jalbert falsely claimed that Picard was waving his gun around and pointing it at people. However, Picard was holding a sign the entire time and did not touch his gun. Also, as you will see below, the officers admit that they were lying.

Had Picard actually been waving a gun, these troopers would have approached the situation in an entirely different manner, with guns drawn and possible SWAT backup. However, they did no such thing, because there was clearly no threat from the activists.

The fact that they were no threat did not stop the subsequent assault, though.

Two troopers approached Picard while forcefully removing his gun and then grabbing his camera, falsely claiming it is illegal to film. When Picard informs the officer can legally film here, the officer ignorantly asserts that “It’s illegal to take my picture. Personally, it is illegal.”

“Did you get any documentation that I am allowing you to take my picture”? asks the cop.

State-owned roadways and right of ways are public property. The trooper’s assertion that it is illegal to film on his ‘state property’ was entirely false and in violation of Connecticut Bill No. 245, which “protects the right of an individual to photograph or video record peace officers in the performance of their duties.”

All this aggressive and unlawful behavior of these troopers, however, was about to come back to haunt them. After illegal confiscating the camera — the trooper forgot to stop it from recording.

What happened next was a behind the scenes glimpse of what it looks and sounds like when cops lie to charge innocent people with crimes.

The corruption starts as an unidentified trooper begins to search for anything that these gentlemen may have done to trump charges up on them. However, they were clean. At this point, Trooper first class Barone chimes in describing how they now have to charge these men with something to justify their harassment and subsequent detainment.

“Want me to punch a number on this? Gotta cover our ass,” explains the trooper.

“Let’s give him something,” says an unidentified trooper, pondering the ways they can lie about this innocent man.

“It’s legal to do it,” he continues, describing how the actions of the two activists are completely legal, before going on to make up charges on them.

“I think we do simple trespass, we do reckless use of the highway and creating a public disturbance,” Jacobi says as he makes up these false charges against innocent people. “All three are tickets.”

Once they figure out the false charges to raise, the officers then brainstorm a story of lies to back them up.

“And then we claim that, um, in backup, we had multiple, um,” the unidentified trooper stutters as he makes up his fake story. “Um, they (the non-existent complainants) didn’t want to stay and give us a statement, so we took our own course of action.”

The corrupt cops had then solved their fake case, lied about a cover story, and were set to charge an innocent man with three crimes — all in a day’s work.

But there was just one more thing…. “Oh shit!” blurts out the cop as he realizes their entire scandalous corrupt conversation was just recorded. Apparently, however, the officer felt that it must not have recorded their conversation as the phone was returned.

The cops then gave the innocent man back his weapon, and it’s back to the DUI checkpoint for them — to harass and detain more innocent people.

In speaking with the Free Thought Project, Picard said, “Per my lawyer’s request, I have kept quiet until now.”

“My lawyer and I went to the first court appearance on Thursday, January 14th, 2016, where the prosecutor offered a $25 fine, in lieu of the original $300 fine, to make the case go away,” he said. “I rejected the deal because I did nothing wrong. As of now, the prosecutor has not dropped the case despite having video evidence of police misconduct.”

The trial is set for April 25th.

Watch the video below and remember that this can happen to anyone anywhere and at any time. All a corrupt cop has to do to ruin the lives of those they do not like, is make up a lie and get their fellow cops to corroborate that lie. Had the cop not left the video going, Picard’s situation would be much different and the world would think he’s a criminal.