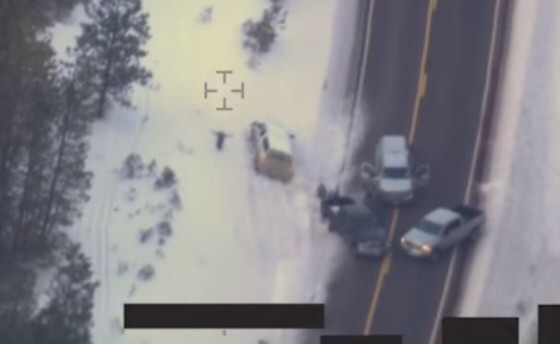 US Army veteran Sgt. E-5 Allen Lardieri has spoken out concerning the FBI release of the video of the murder of LaVoy Finicum. He used some technical terms, of course, but in his estimation, the video was not recorded according to any standard procedure, and he confirms that it was not drone footage, but was, in fact, a manned aerial vehicle.

Lardieri says the system that recorded the murder of Finicum is known as an Orion ISR (Intelligence, Surveillance, Reconnaissance) platform. He said he would never release where he gets that information from, but does go on to point out problems with the video and why those problems exist.

“It’s extremely relevant to this,” he added. “It is a side that is very unique that I don’t think you or myself haven’t heard.”

Those who operate the vehicles and the cameras that obtain the video footage are known as ASOs (Aerial Surveillance Operators). Lardieri says that the field of operation is very limited concerning this kind of operation, military-occupational-specialty-wise.

According to Lardieri, an individual communicated to him some “inconsistencies” on the behalf of the operators of the vehicle that captured the video. However, the question is were these inconsistencies “operator error” or merely intentional maneuvers to “keep the video vague””?

Lardieri confirms that this particular platform is found “consistently on manned aerial vehicles, not drones.” So, we discover that the footage is not from a drone, but there is a person operating the vehicle and the video capture on board.

The person that relayed to Lardieri that the Orion system was the one used in this operation said that he had viewed the same screen for 506 hours of combat.

In an exclusive interview, Sgt. Lardieri told Freedom Outpost that thermal imaging would have shown every shot fired and, if the pilot been flying at an altitude of 10,000 feet or higher, would have rendered flawless video and given a better picture of what took place.

He told us that according to a proper procedure, the quality of the video would have been at 96 megapixels, which would have allowed for determining people inside the vehicle. This, along with thermal imaging, would have shown not only the people inside, but also any and all gunfire that took place.

However, the video footage was not shot using the standard thermal imaging that Sgt. Lardieri stated would be used.

According to Lardieri, the operator was knowingly engaging in a flight pattern at an altitude that would not provide the best video coverage or he was ignorant, which cannot be accounted for considering that this would be a basic operating procedure.

So, the only reason for the release of the video by the FBI is that it was meant to conceal the reality of what took place, and make things appear different than they really were. Those are my words, not Sgt. Lardieri’s.

Sgt. Lardieri told me that those who had their mind set that Finicum was some sort of terrorist will find validity to their mindset and those that believe the FBI were out to kill him still find their validitity as well, due to the poor quality of the video.

I’ll leave it to the reader to determine whether or not the pilot was knowingly engaged in a coverup of what appears to be an FBI ambush of LaVoy Finicum and those with him, which resulted in his murder. Personally, I think we can conclude that if basic operation procedure was to operate at higher altitude and use thermal imaging, then we can conclude that this pilot was acting under the order of the Justice Department, under criminal Attorney General Loretta Lynch, who is under the direction of the criminal-in-chief Barack Hussein Obama Soetoro Sobarkah for the express purpose to put down those who dared to call the government in DC to account regarding the Constitution.