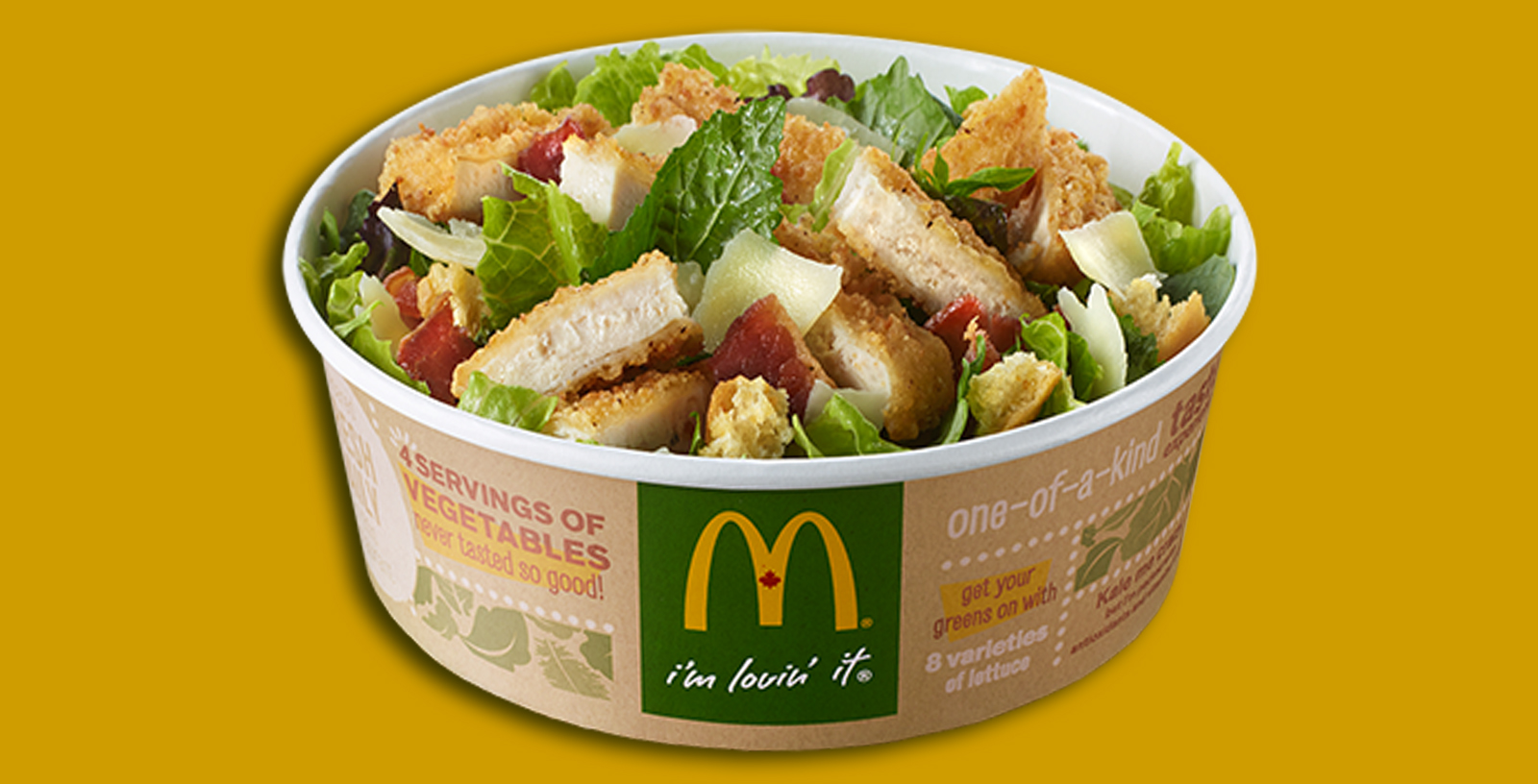 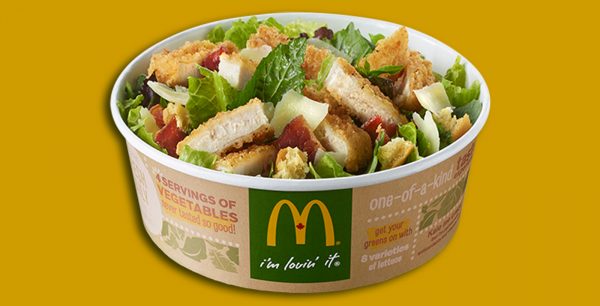 Though McDonald’s remains a powerful force in the global fast food marketplace, its recent PR disasters, from its ‘19 ingredients in the french fries’ fiasco to its use of abused poultry, have motivated the company to rebrand itself. McDonald’s has made not only an appeal to increasingly bizarre snacks, such as the chocolate-laced fries it recently debuted in Japan — it has also begun to offer “healthy” options.

One of McDonald’s recent responses to slumping sales was the launch of a line of salads in Canada, which they announced last year. The new caesar salad, called the “Keep Calm and Caesar On,” offers “a nutrient-rich lettuce blend with baby kale.” The only problem? The caloric and sodium content in this new ‘healthy’ option exceed those of a Big Mac. And a Double Big Mac.

Though the salad’s packaging invites the consumer to “get [their] greens on with eight different kinds of lettuce,” the meal also includes parmesan cheese, bacon, croutons, chicken, and a Kraft-made dressing. McDonald’s Canadian website informs consumers that even with the “crispy chicken” option, the salad has 530 calories — but this figure excludes the dressing. As the Canadian Broadcasting Corporation (CBC) noted, once it’s added, “the salad tops up at 730 calories, 53 grams of fat, and 1,400 milligrams of salt.”

“Health-wise, I think it’s fat and sodium overload,” Toronto registered dietitian, Shauna Lindzon, told CBC. The maximum recommended sodium intake in Canada is 2300 mg per day, though Health Canada, the government’s health department, says 1500 mg is ideal. This means eating a “healthy” caesar salad fills up the vast majority of the “healthy” sodium limit. Lindzon says that “By eating that salad, you’re getting your sodium for the day,” while CBC points out that “average adult women would also be getting about one third their recommended daily calories.”

By comparison, the classic Big Mac has 530 calories and 950 milligrams of sodium. Even the Double Big Mac has ‘only’ 680 calories and contains ‘just’ 1340 milligrams of sodium. McDonald’s new, ‘healthier’ option also surpasses the calorie content of not just the Big Mac and variations thereof, but the regular cheeseburger, the double cheeseburger, the Filet-o-Fish, the Double Filet-o-Fish, the Bacon McDouble Sandwich, the Quarter Pounder with Cheese, and the Quarter Pounder B.L.T. — to name a few.

The caesar salad’s drawbacks, however, are not limited to its caloric and sodium content. A cursory glance at the ingredients reveals questionable contents. Though McDonald’s hinted it might offer organic options back in 2014, it has not made any widespread changes to that effect. The caesar salad is not listed as organic, which likely means the lettuce and kale have been sprayed with pesticides, which are linked to a variety of health problems. The bacon includes sodium nitrite, which the International Agency for Research on Cancer has deemed “probably carcinogenic” — to say nothing of the conditions factory farm animals are subject to.

While other salads on the menu, including the “I’m Greek-ing Out” option, have fewer calories, they are still not necessarily healthy. As Lindzon said of the salad, “Combined with the Greek Feta Dressing, the ‘I’m Greek-ing Out‘ salad with grilled chicken amounts to: 420 calories, 26 grams of fat, and 1,080 milligrams of sodium. That’s almost the same calorie, fat and salt content as a Double Cheeseburger.”

These so-called healthier options were largely developed in response to McDonald’s shrinking sales worldwide, though the company initially fought the change. As the Associated Press noted last year when the company announced its new line of salads in Canada, “The embrace of kale may seem odd to some, considering McDonald’s recently ran an ad that celebrated the Big Mac and mocked trendy ingredients like soy, quinoa, Greek yogurt — and kale.”

However, facing decreasing profits and growing apprehension towards its products, CEO Steve Easterbrook announced last year his intention to turn the company into a “modern, progressive burger company.”

If by modern and progressive Easterbrook means riddled with obscene levels of sodium and calories, then by all means, he is on the right track.