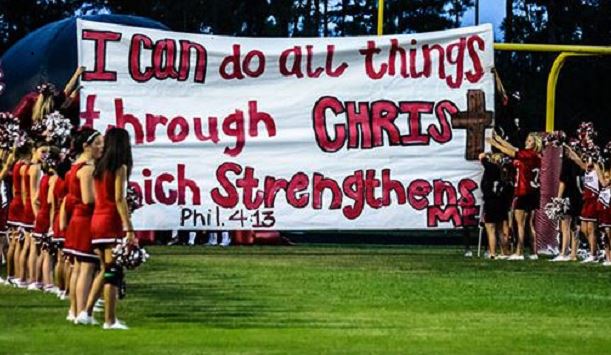 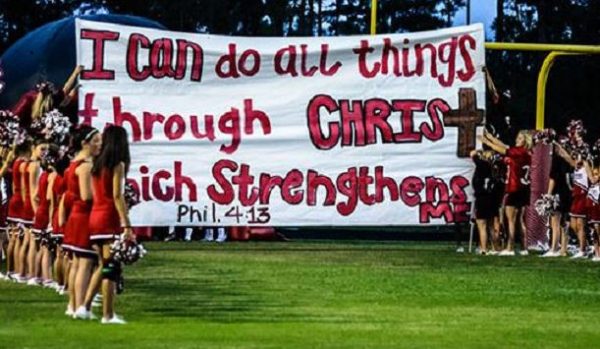 Cheerleaders in the Kountze Independent School District have scored a major victory for Christianity and free speech. The group won a unanimous ruling by the Texas Supreme Court against their school district to post Bible verses on their team’s banners at football games.

In an 8-0 ruling, the Texas Supreme Court rejected the Kountze Independent School District’s claim that the case should be dismissed because officials decided to allow the cheerleaders to use the Bible verses while retaining the right to censor speech in the future.

Kelly Shackelford, president of Liberty Institute, which represented the cheerleaders, called it a “victory for the free speech and religious liberty rights of all Texas students.”

“We are delighted that the court considered this case so straightforward that it did not even require oral argument,” he said. “In light of today’s Supreme Court ruling, we hope the Court of Appeals will resolve this case permanently in the cheerleaders’ favor.”

James Ho, the lead appellate counsel, said that at “a time when religious liberty is under assault nationwide, this ruling is a welcome reminder that the Constitution protects people of faith – and a welcome rebuke to government agencies that try to play games with our rights.”

No government and no school district has the authority to stop the free exercise of the Christian religion. That is exactly what is protected in the First Amendment. If it’s protected at the DC level, then it is protected as a right at the state level.

According to the ruling, the court wrote that the school district “no longer prohibits the cheerleaders from displaying religious signs or messages on banners at school-sponsored events.”

“But that change hardly makes ‘absolutely clear’ that the district will not reverse itself after this litigation is concluded, without the cheerleaders’ requested declaratory and injunctive relief,” the ruling added.

Of course, the district has claimed constitutionality in censoring the free exercise of religion. They also have “continually defended not only the constitutionality of that prohibition, but also its unfettered authority to restrict the content of the cheerleaders’ banners – including the apparent authority to do so based solely on their religious content.”

Sens. John Cornyn (R-AZ), and Ted Cruz (R-TX) filed a brief in support of the cheerleaders.

According to the senators’ brief, the united States Supreme Court’s “government-speech jurisprudence the answer is straightforward: messages created solely by student cheerleaders do not become government speech simply because aspects of cheerleaders’ activities are regulated by the school.”

“The speech belongs to the cheerleaders, and it is entitled to First Amendment protection,” the brief added.

The brief also continued by demonstrating that the “undisputed facts of this case establish that the messages written on the banners and displayed at the football games were the cheerleaders’ words, not the schools.”

Co-lead counsel Prerak Shah from Gibson, Dunn & Crutcher LLP stated, “We are profoundly grateful to the Texas Supreme Court for enforcing our legal rights, and to Sen. Cornyn, Sen. Cruz, Gov. Abbott, and General Paxton for their leadership and for standing with the cheerleaders in their fight to protect the First Amendment.”

Thought the cheerleaders won their battle in a trial court in 2013, the school district just had to demonstrate their bullheadedness and their anti-christ spirit by appealing the decision. The communist organization known as the American Civil Liberties Union joined the district in attacking the cheerleaders, who are your kids Texas!

However, truth and justice have won out! For that, we can be grateful and on top of that, we can learn that the generation coming behind us is not necessarily as bad as the media would have us believe, including the professed “conservative” media. Praise God for that!