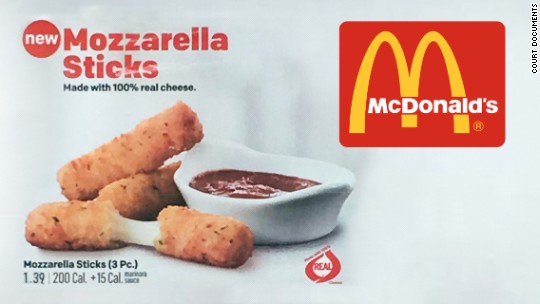 Riverside, CA — McDonald’s has had a tough couple of weeks. On Wednesday, we reported McDonald’s new ‘healthy’ “Keep Calm and Caesar On” kale salad actually has more calories and sodium than a Double Big Mac. Now, McDonald’s new “Mozzarella” Sticks are coming under fire, and one California resident filed a class action lawsuit last week seeking $5 million in damages is accusing the company of false advertising.

Before the lawsuit was even filed, the lack of cheese had consumers puzzled. In fact, as the tweets below show, some people wondered if there was any cheese in them at all. One explanation contended McDonald’s was just being frugal with the cheese, but some commenters with cooking experience suggested it might be a simple case of overcooking, which causes an apparition of emptiness.

I love the new mozzarella sticks from @McDonalds. Well the breading since none of them had cheese. #feelingempty pic.twitter.com/XkLAiCv7MP

When you decide to try the @McDonalds mozzarella sticks but there's no cheese in them??? pic.twitter.com/UdYClSEhml

I came in with extremely low expectation for @McDonalds mozzarella sticks…..yet somehow I was still disappointed pic.twitter.com/G7IlmQp7b5

Now, the botched rollout of the new mozzarella sticks has gotten worse. Chris Howe, a Riverside, California man’s lawsuit against McDonald’s claims the company is falsely advertising them as ‘made with 100% real cheese,’ even though he says that is not entirely true.

“Relying on McDonald’s representations about the Sticks, and the self-evident proposition that a product called ‘mozzarella’ will be mozzarella cheese, consumers have been misled en masse into purchasing the Sticks,” the lawsuit claims.

The plaintiff says he tested them and found them to be only partially real cheese. According to a local NBC news affiliate, “Howe claims he had the central filling of the sticks tested and determined they are 3.75% starch by weight.”

While this seems like a small figure, the FDA has a very strict set of regulations governing cheese makers and marketers. According to the FDA, if the lawsuit is correct, McDonald’s “mozzarella” product should more accurately be called “mozzarella-like fried sticks.”

Even worse for McDonald’s, the lawsuit may reveal the company is in violation of federal regulations by calling these “mozzarella-like fried sticks” real cheese.