“The mosque that is hosting the commander in chief, while receiving his historic benediction graduated a terrorist who plotted to blow up a local Army recruiting station, hired an imam who condoned suicide bombings and blames American ‘foreign policy’ for terrorism. Obama has to be willfully blind not to see all these ties to terror.”

Or maybe he knows all about them, and just doesn’t care — or even actively favors this activity. Those are the choices: he is either stupid, which he isn’t, or willfully ignorant, which he is unlikely to be, or simply outright traitorous. 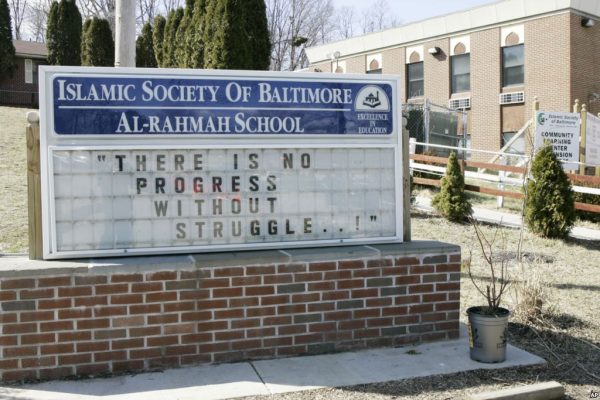 Islamophilia: President Obama is conferring legitimacy on a Baltimore mosque the FBI just a few years ago was monitoring as a breeding ground for terrorists, after arresting a member for plotting to blow up a federal building.

IBD has learned that the FBI had been conducting surveillance at the Islamic Society of Baltimore since at least 2010 when it collared one of its members for plotting to bomb an Army recruiting center not far from the mosque in Catonsville, Md.

Agents secretly recorded a number of conversations with a 25-year-old Muslim convert — Antonio Martinez, aka Muhammad Hussain — and other Muslims who worshipped there. According to the criminal complaint, Martinez said he knew “brothers” who could supply him weapons and propane tanks.

“He indicated that if the military continued to kill their Muslim brothers and sisters, they would need to expand their operation by killing U.S. Army personnel where they live,” FBI special agent Keith Bender wrote. Martinez said that in studying the Quran he learned that Islam counsels Muslims to “fight those who fight against you.”

Sentenced to 25 years in prison in 2012, Martinez also stated in a social media posting that he wanted to join the ranks of the “mujahideen” in “Pakistan or Afghanistan (a country that struggle[sic] for the sake of allah).” Most of ISB’s board members are from Pakistan.

To help disrupt the plot, the FBI reportedly put an undercover agent in the mosque, which upset the leadership there. After protests, the FBI sent an official to ISB to take questions and mollify concerns the bureau was spying on Muslims.

Members of the mosque complained that the FBI tried to “entrap” Martinez and other Muslim terrorism suspects by sending “spies with Muslim names” into the mosque.

“If I was the president of the mosque, I would not let you come here without strip(-searching) you,” one member angrily told the FBI official, “because you might drop something (like a bug) to hear what’s going on here.” “The Muslim Link” newspaper described the questioner as Pakistani.

This is the mosque that will be honored with a visit from Obama on Wednesday, the first U.S. mosque visit of his presidency.

It’s now abundantly clear the White House failed to properly vet the venue. Reportedly, it let the Council on American-Islamic Relations choose the site, even though the FBI has banned CAIR from outreach because of known ties to the Hamas terrorist group.

“For a number of years we’ve been encouraging the president to go to an American mosque,” CAIR spokesman Ibrahim Hooper said. “With the tremendous rise in anti-Muslim sentiment in our country, we believe that it will send a message of inclusion and mutual respect.”

As we reported Tuesday, ISB is affiliated with the Islamic Society of North America — which federal prosecutors in 2007 named a radical Muslim Brotherhood and Hamas front and an unindicted terrorist co-conspirator in a scheme to funnel more than $12 million to Hamas suicide bombers — and ISB has helped organize the terror-tied ISNA’s conferences.

The Shariah-compliant mosque was led for 15 years by a radical cleric — Imam Mohamad Adam el-Sheikh — who once represented a federally designated al-Qaida front group. El-Sheikh also has argued for the legitimacy of suicide bombings, according to the Washington Post.

We also first reported that ISB board member and vice president Muhammad Jameel has blamed American foreign policy — namely, U.S. support for Israel — for terrorism and the rise of Osama bin Laden.

“I hope (his death) does not camouflage the bigger picture, which is to look at what gave rise to OBL and what are the root causes of terror,” Jameel said in a local 2011 interview. “Just eliminating him does not resolve the longer-term problems, which I consider to be (U.S.) foreign policy.”

ISB board members are required to have “an in-depth understanding of the Shariah,” and “must take Islam as the way of life,” according to recently amended articles of incorporation papers filed with the state of Maryland.

We have also learned that ISB invited one of the imams of the Boston Marathon bombers’ mosque to headline a 2013 fundraiser for its Islamic school.

Then-Islamic Society of Boston imam Suhaib Webb spoke at the 25th anniversary banquet of ISB’s Al-Rahmah School — even though two days before 9/11, according to an FBI surveillance report, Webb was raising cash for a Muslim cop-killer together with al-Qaida cleric Anwar Awlaki, the hijackers’ spiritual leader.

So let’s recap. The mosque that is hosting the commander in chief, while receiving his historic benediction graduated a terrorist who plotted to blow up a local Army recruiting station, hired an imam who condoned suicide bombings and blames American “foreign policy” for terrorism.

Obama has to be willfully blind not to see all these ties to terror.