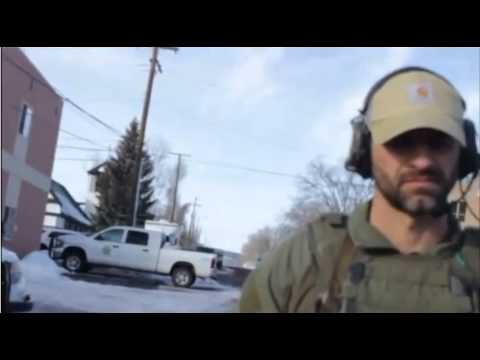 BURNS, OR (INTELLIHUB) — Amid rumors of armed drones above the skies of Burns, Oregon as well as private mercenaries operating within the town, new, credible eyewitness reports have emerged that confirm the existence of a massive amount of heavily armed paramilitary government forces patrolling both the city and the roads leading to the wildlife refuge.

Independent journalist Lory Storm, reporting for KSDZ FM in Nebraska, was a recent guest on one of the stations radio shows and what she revealed provides a grim picture of the tiny Oregon town that has become the latest hot spot in a massive revolt over federal takeover of lands throughout the western United States.

“We did learn some pretty disturbing things in Burns. Right now the FBI has the road to the wildlife refuge blocked off in a couple of places. We attempted to get past the first and it was a little bit of a tense scene,” reported Storm.

“We were sitting next to an Oregonian photographer….a couple of vehicles went through, an MRAP and a pickup truck of some type.”

This is where her accounts goes from interesting to downright startling.

“Next thing we know here comes about six or seven fully armored Suburbans coming up at a high rate of speed, hit the breaks… one of the men got out to move the cones and I asked why can’t we go down this road,” she continued.

“So it’s under siege by you guys, not anybody else,” Storm countered.

Storm then gets to the heart of the issue by first acknowledging that if the above demands were made by normal police or FBI officials then yes, they would be annoying but they would be at least somewhat normal. Instead, her interaction with the heavily armed paramilitary forces was anything but.

Storm explained, “The problem with this is, these weren’t normal FBI guys, these guys were in full fatigues, full body armor, armed to the teeth and there were what six or eight of them in each Suburban and there were six or seven Suburbans.”

“Its like we are at war on our own soil and these guys were just a fraction of the contingent…. we asked the Oregonian reporter if we should call somebody and she said oh no that’s just a shift change,” Storm passionately described.

Lory also detailed the fact that LaVoy’s vehicle was towed 142 miles to the state police impound yard in Bend, Oregon and is currently covered up with tarps which obviously stops anyone from seeing how bullet ridden it actually is.

The interview also gets into the very clear fact that the supposed unedited video released by the FBI of the shooting death of rancher LaVoy Finicum was actually completely and totally edited. There are literally key parts left out, including Ryan Payne getting out of the vehicle in an attempt to shield the others from possible death. Remember, Victoria Sharp and now Shawna Cox have both confirmed the amazing actions of Payne.

“The FBI claims that this is an unedited video are completely debunked at this point,” Storm rightly declared.

All in all this is an absolute must hear interview and the reporter Lory Storm clearly knows her stuff, coming off as a highly credible independent voice.

Interestingly, in a recently released analysis of video footage of Ammon Bundy walking through Burns, Oregon sometime during the occupation of the refuge but before the arrests and death of Finicum, YouTuber Call of Duty Goddess makes several key points that dovetail with the reporting done by Storm.

The armed paramilitary forces seen throughout the streets of Burns, Oregon are wearing no insignia and have all the hallmarks of private mercenaries. They have been documented in and around the town both before the arrests and after. The presence of these forces has actually doubled since the arrests, according to locals.

Who are the thugs on the streets of Burns?!