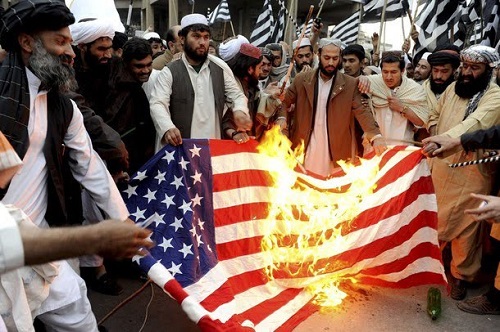 Many of us saw it coming a long time ago — increasing confrontation between liberty proponents and the corrupt federal establishment leading to increasing calls by political elites and bureaucrats to apply to American citizens the terrorism countermeasures designed for foreign combatants. It was only a matter of time and timing.

My stance has always been that the elites would wait until there was ample social and political distraction; a fog of fear allowing them to move more aggressively against anti-globalists. We are not quite there yet, but the ground is clearly being prepared.

Economic uncertainty looms large over our fiscal structure today, more so even than in 2008. Global instability is rampant, with Europe at the forefront as mass migrations of “refugees” invade wholesale. At best, most of them intend to leach off of the EU’s already failing socialist welfare structure while refusing to integrate or respect western social principles. At worst, a percentage of these migrants are members of ISIS with the goals of infiltration, disruption and coordinated destruction.

With similar immigration and transplantation measures being applied to the U.S. on a smaller scale (for now) the ISIS plague will inevitably hit our shores in a manner that will undoubtedly strike panic in the masses. I believe 2016 will be dubbed the “year of the terrorist,” and ISIS will not be the only “terrorists” in the spotlight.

While scanning the pages of mainstream propaganda machines like Reuters, I came across this little gem of an article, which outlines plans by the U.S. Justice Department to apply existing enemy combatant laws used against ISIS terrorists and their supporters to “domestic extremists,” specifically mentioning the Bundy takeover of the federal refuge in Burns, Oregon as an example.

“Extremist groups motivated by a range of U.S.-born philosophies present a “clear and present danger,” John Carlin, the Justice Department’s chief of national security, told Reuters in an interview. “Based on recent reports and the cases we are seeing, it seems like we’re in a heightened environment.”

“Clear and present danger” is a vital phrase implemented in this statement from Carlin and he used it quite deliberately. It refers to something called the “clear and present danger doctrine or test,” a doctrine rarely used except during times of mass panic, such as during WWI and WWII. The doctrine applies specifically to the removal of 1st Amendment rights of free speech during moments of “distress.”

What does this mean, exactly? “Clear and present danger” is a legal mechanism by which the government claims the right not only to prosecute or destroy enemies of the state, but also anyone who publicly supports those same enemies through speech or writing.

Recently, the prospect of allowing the Federal Communications Commission to target and shut down websites related to ISIS has been fielded by congressional representatives. Many people have warned against this as setting a dangerous precedent by which the government could be given free license to censor and silence ANY websites they deem “harmful” to the public good, even those not tied to ISIS in any way.

Of course, overt hatred of Islamic extremism amongst conservatives is at Defcon 1 right now, and with good reason. Unfortunately, this may lead constitutional conservatives, the most stalwart proponents of free speech, to mistakenly set the stage for the erasure of free speech rights all in the name of stopping ISIS activity. The greatest proponents of constitutional liberties could very well become the greatest enemies of constitutional liberties if they fall for the ploy set up by the establishment.

The Reuters article outlines the future implications quite plainly:

The U.S. State Department designates international terrorist organizations to which it is illegal to provide “material support.” No domestic groups have that designation, helping to create a disparity in charges faced by international extremist suspects compared to domestic ones.

It has been applied in 58 of the government’s 79 Islamic State cases since 2014 against defendants who engaged in a wide range of activity, from traveling to Syria to fight alongside Islamic State to raising money for a friend who wished to do so.

Prosecutors can bring “material support” terrorism charges against defendants who aren’t linked to groups on the State Department’s list, but they have only done so twice against non-jihadist suspects since the law was enacted in 1994. The law, which prohibits supporting people who have been deemed to be terrorists by their actions, carries a maximum sentence of 15 years in prison.”

The Justice Department goes on to explain that they are “exploring” options to make “material support” charges more applicable to “domestic extremists.”

To be utterly clear, this could apply to any and everyone who promotes anti-government sentiments online, and will likely be aimed more prominently at liberty analysts and journalists. The argument for this move is rather humorous in my view — bureaucrats and others complain that it is “not fair” that Islamic terrorists are being treated more harshly than “white rural domestic extremists” and that material support laws should be enforced against everyone equally.

Yes, that’s right, the 1st Amendment is under threat because the Justice Department does not want to appear “racist.” At least, that is their public excuse…

I’m not sure whether it is depressing or hilariously ironic that the U.S. government (along with many other governments) is preparing the groundwork for prosecution of liberty activists for material support of terrorism when it is the government that has been proven time and again to be by far the most generous material supporter of terrorist organizations.

Will this all take place in a vacuum? Of course not. Something terrible is brewing. Another Oklahoma City-stye bombing, perhaps. Or a standoff gone horribly awry. The standoff in Oregon continues without Ammon Bundy and is about to get worse in the next week according to my information (you will see what I mean). The point is, the narrative is being finalized in preparation for whatever trigger events may be in store, and that narrative closely associates ISIS with liberty activists as being in the same category.

“As law enforcement experts confront domestic militia groups, “sovereign citizens” who do not recognize government authority, and other anti-government extremists, they also face a heightened threat from Islamic extremists like the couple who carried out the Dec. 2 shootings in San Bernardino, California.”

This is why I have consistently argued against giving any extra-judicial powers to our already bloated federal system. I am a staunch opponent of Islamic immigration and terrorism, but some people are so desperate to fight one monster that they are willing to give unlimited powers to another monster thinking it will give their minds ease. These people are fools, and they are putting the rest of us at risk.

If you want to fight ISIS, then fight them yourself. Do not give the same government that helpedcreate ISIS and then deliberately transplanted them to Europe and the U.S. even more legal authority over our lives to supposedly “stop” ISIS. This would be absurd.

In the meantime, I would point out that regardless of how the federal government wishes to label us, the liberty movement could not be more different from the Islamic State:

1) We don’t enjoy covert funding and training from the government at large as ISIS does. (Though according to leftists, we all take our marching orders from the Koch Brothers).

2) Most of us were born in this country and are rather attached to it.

4) Many of us are far better trained than ISIS goons, so if anything, we are a more severe threat to the enemies of free society. (We actually look down our sights when we shoot rather than hiding behind cars with the rifle over our head and squatting like a constipated dog. We can also operate their AK-47s better than they can).

5) We are as opposed to Sharia Law as we are to martial law. In fact, we see them as essentially the same unacceptable circumstance.

6) We don’t cannibalize our enemies. (Who would want to take a bite out of Henry Kissinger’s spleen?)

7) We might look down on the insane ramblings of today’s feminists, but at least we would not stone them, enforce female circumcision, then rape them, then throw acid in their faces, then slap a hijab on them and take away their driver’s licenses. So maybe, just maybe, we toxic masculine conservative barbarians aren’t as bad as they seem to think we are.

8) We understand that black pajamas are not the best camouflage, but ISIS may have better fashion sense than we do.

10) They fight to be martyred. We fight to win.

When all is said and done, who is the greater threat to you and your freedoms? A psychotic theocrat that has taken his religion so far into the forbidden zone that any evil, no matter how heinous, is justified through the circular logic of zealotry? The criminal government that funded that psycho, trained him, slapped a rocket launcher in his hands and then gave him a free plane ride to your favorite shopping mall? Or, some weirdo that stores lots of food and gas masks in his basement and every once in a while talks to you about 9/11? Come on, think about it…