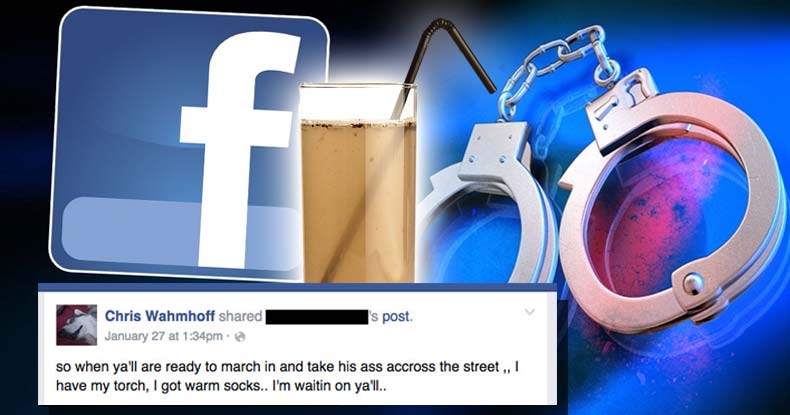 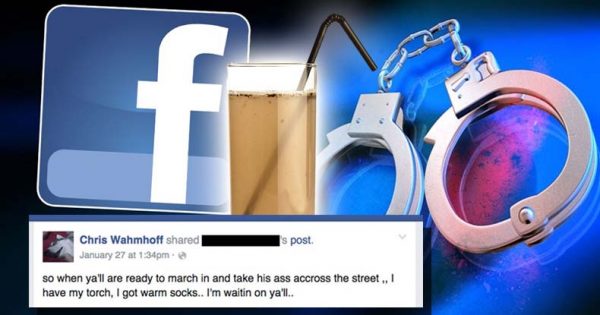 Flint, MI – Activist Christopher G. Wahmhoff, 37, is facing charges after he made a Facebook post referencing the water crisis in Flint, Michigan.

Wahmhoff was already on probation for an act of civil disobedience two years ago. He crawled into an Enbridge pipeline and stayed in there for ten hours to protest the expansion of a recently ruptured oil pipeline that had already damaged the local environment. Ever since that protest, Wahmhoff has been on probation and faces regular scrutiny from his probation officer.

Wahmhoff is back in trouble again this month after the courts caught word that he was posting about the Flint water crisis on Facebook. The post eventually resulted in Wahmhoff violating his probation and getting cited for “threatening behavior.”

In late January, Wahmhoff made a post calling for the arrest of Governor Snyder, as many activists have done in recent months. Wahmhoff wrote in one post “so when ya’ll are ready to march in and take his ass across the street,, I have my torch, I got warm socks. I’m waitin on ya’ll..”

According to the violation written against Wahmhoff, he “displayed threatening behavior on social media (Facebook) when he responded to a posting pertaining to the Governor Of Michigan hiring two public relations firms in lieu of hiring engineers to restore the infrastructure to provide clean water for Flint.”

Wahmhoff says he believes the orders to put legal pressure on him came from the highest levels of the state government, and not directly from his probation officer.

“I don’t think this comes from the county. It comes from the same state that poisoned Flint, destroyed Detroit and didn’t do things well here with the Kalamazoo River spill,” he said.

“I thought it was a common cultural reference. But, maybe not,” he said, adding that, “My “torch” was a reference to the clichéd angry mob of citizens carrying torches and pitchforks,” which he said was a metaphorical statement that was meant to represent a protest.

Many attorneys have commented that his posts are protected free speech. However, the terms of his probation could actually take away his right to free speech.

Nancy Costello, of Michigan State University’s First Amendment Law Clinic, said, “It’s targeted speech at the governor, but he’s talking about getting a torch and pitchfork. That doesn’t really happen anymore. It’s hyperbole. It’s exaggeration. It’s not something to be believed.”

Unfortunately, since he is on probation for protesting the destruction of his local environment, Wahmhoff is restricted from expressing himself in ways that the government does not like.

According to the terms of his probation, Wahmhoff “must not engage in any assaultive, abusive or threatening behavior.”

On February 22, a judge will decide whether or not his behavior was “threatening.”