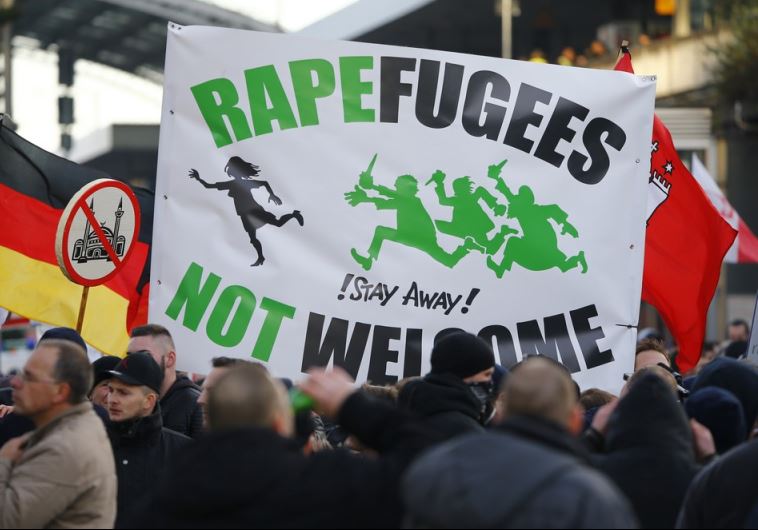 Muslim men are following Islamic texts and teachings in their treatment of non-Muslim women. They behave the way the Quran directs, as if non-Muslims exist only for the pleasure of Muslim men (the “captives of the right hand,” i.e. sex slaves, are discussed in Quran 4:3, 4:24, 23:1-6, 33:50, and 70:30).

The rape jihad is widespread, the terror is part of the social fabric of daily life, and it is censored by the media and political elites.

By Corey Charlton for MailOnline, 10 February 2016

An Algerian man who almost killed his 25-year-old student victim shouted out ‘if Allah wills it’ in Arabic as he raped her in a darkened alley, a court has heard.

The man, identified only by his first name Rheda, is accused of following the student as she walked home from a nightclub at 5am in Hannover, Germany.

Afterwards, with his victim badly beaten, he is alleged to have climbed off her and asked her if she enjoyed it.

After the attack had ended, the Algerian man allegedly asked his victim if she had ‘enjoyed it’, the court heard

The woman was attacked while walking home from a nightclub about 5am in Hannover (pictured), Germany

The shocking details were revealed at the trial of the 37-year-old asylum seeker from Algeria who has denied rape. Prosecutors say DNA evidence links him to the crime.

The young woman, identified only by her first name Lara, said it was the worst moment of her life when she was attacked.

She said: ‘He asked me in broken German if I had [the] time. Before I could reply he then grabbed me by the arm and pulled me down an alleyway.

‘He told me “I need sex”. I opened my mouth to scream but he put his hand over my mouth. I had a pepper spray, and I tried to spray it at him but he grabbed it off me, and used it on me instead.

‘Then he threw me onto the ground, and tried to pull off my trousers but he couldn’t do it. Then he started screaming at me to get undressed.’

She told the court she had tried to win time by begging him to leave her alone and hoped that someone would come past.

Nobody did, and when she tried to scream again he started beating her in the face and he sprayed the pepper spray on her face again.

He had banged her head on the ground repeatedly until she was almost unconscious, and she thought she was going to die.

She said: ‘He put his hand over my mouth and closed my nose, and I thought I was going to suffocate. I then indicated to him that I had given in, and would do what he wanted if he let me breathe.’

He then raped her and she said that throughout he was talking to himself, shouting ‘Inshallah’ – which is Arabic for ‘if Allah wills it’.

She said: ‘Afterwards he asked me if it was good, and if I had enjoyed it.’

Her voice then broke as she added: ‘I never would have thought something like that could happen to me. I just couldn’t comprehend it. I thought I was going to die.’

She identified her alleged attacker in court. He denies rape.