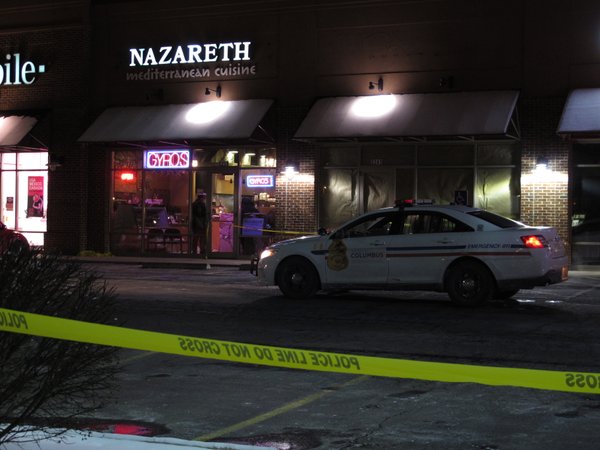 The name of the popular Middle Eastern restaurant where the murderous machete attack took place is Nazareth – the childhood home of Jesus. The owner is an “outspoken Christian” from Israel Law enforcement said “there’s nothing to lead us to believe this is anything more than a random attack.”  Right off the bat they are saying it isn’t terror. Which means it’s terror.

One witness told My Fox 28 Columbus the scene in the restaurant was pure “carnage” and it seemed like a “systematic attack.”

Police shot and killed a man who stormed into a central Ohio restaurant wielding a machete and randomly attacking people as they sat unsuspectingly at their dinner tables, authorities said.

Four people were injured in the brutal attack Thursday evening at Nazareth Restaurant and Deli, a Mediterranean restaurant in Columbus. The victims were taken to an area hospital and were expected to recover.

Two people who were inside the restaurant at the time described the scene to reporter Rob Wells as “carnage” saying it seemed like a “systematic attack.”… (ABC6)

“There’s blood all over inside the restaurant,” Steven Bass, Karen’s husband, told WSYX.

The machete wielding savage ask the owner where he was from (Christian from Israel) and came back an hour later swinging.

“[He] immediately began swinging a machete at customers and employees inside,” Sgt. Rich Weiner with the Columbus Police Department said. “There was no rhyme or reason as to who he was going after as soon as he walked in, according to some of the witnesses.”

One comment at Free Republic said, “Nazareth’s is just around the corner from our home. My wife and I go there often. They have wonderful Greek food. Hanie, is the very popular owner. He engages with the customers and is very jovial.

The latest news is that the FBI is investigating as a possible terrorist act, but no detail as of yet. This is in a very quiet neighborhood with little crime. Gahanna is kind of a all-American town. Their weekly newspaper lists the previous week’s crimes. I read it for chuckles as they consist of things like, woman notified police of a loud noise, mailbox knocked over, neighbor complained of dog poop on his porch. We’ve lived here for 15 years and nothing like this before – at least this close to our home.”

When the police caught up with the savage:

The suspect eventually made it out of the vehicle with a machete and another knife in hand.

Then, “he lunged across the hood at the officers,” Weiner said. “Another officer in a cruiser fired a couple shots at him and put him down.” (FOX 24)

Tang-soo over at Free Republic posted this photo of the owner, Hani.

“He’s famous for cruising the restaurant with his aluminum bat and asking if folks are ready to leave. Maybe he should have had the bat by the cash register tonight.”

Columbus police say a man came into the restaurant and began hacking people with a machete, sending four of them to area hospitals and critically injuring at least one.He was shot and killed by police after they tracked him down about 5 miles from the restaurant.

As of late Thursday, police hadn’t released the names of those injured or the name of the man who was killed by officers.

It’s unclear why he did what he did.

Sgt. Rich Weiner, a spokesman for the Police Division, said “there’s nothing to lead us to believe this is anything more than a random attack.” The FBI also is investigating but Weiner wouldn’t say why.

Weiner said the man first came into the restaurant about 5:30 p.m. and talked with an employee. It’s unclear whether it was an argument, but he returned about a half-hour later with a machete and attacked a couple eating dinner.

Weiner said that others came to their rescue and also were injured. He said four were hospitalized, including one with serious injuries that required surgery. All are expected to survive.

Zakas said there were no indications recently that anything was wrong. She worked Wednesday night without incident.

“Everything seemed fine,” she said. “Nobody has mentioned issues or problems with anyone.”

Most people leave the restaurant smiling, she said. On Thursday nights, Foley draws a crowd. Sometimes there are parties and kids dancing, she said.

The restaurant is owned by Hany Baransi, who could be seen talking with police behind the crime-scene tape but couldn’t be reached for comment.

Police say the man with the machete fled the restaurant, 5239 N. Hamilton Rd., and was stopped by police off Stelzer Road, just south of Montclair Drive.

He was shot by police, Weiner said, after he got out of his car with the machete in a threatening manner. Two officers fired guns and the man died at OhioHealth Grant Medical Center at 6:24 p.m.

Jason Baker, who lives in New Albany, was headed to a different restaurant in the same shopping plaza when he saw the police cars and ambulances.

When he arrived at Chestnut Hill IV plaza, Baker said he saw one of the victims inside the nearby Carpet One store. The other victims were being helped in the restaurant. There was a significant amount of blood on the sidewalk outside the restaurant, he said.

One of the victims had his arms and a hand bandaged. He heard the man say, “I was trying to help other people. He attacked me.”

The suspect drove off and was later cornered on a road near Easton Town Center shopping complex, about five miles from the restaurant, where he was shot by police during a confrontation. The unidentified suspect was taken to a hospital but died of his wounds.

The number of people attacked has not been confirmed, 10tv.com reports, but four were taken to the hospital and two are in critical condition. The Columbus Dispatch reports six people were transported to the hospital.

“There were a lot of witnesses, a lot of people that our investigators have to interview,” police spokesperson Sgt. Rich Weiner tells 10tv.com. “So right now we have a long road ahead of us for the rest of the night.”

According to 10tv.com, witnesses said the man entered the restaurant and asked for the manager, who wasn’t there. He then left.

He returned about 30 minutes later and, without speaking, began attacking diners, reports say. About 20 people, including two babies, were in the restaurant at the time of the attack.

“He looked straight at me but he went over to the booths and just started going down the booths,” a waitress tells 10tv.com. “It all seemed to happen in slow motion.”

Weiner says people, including employees, began throwing chairs at the suspect, nbc4i.com reports. The man then walked out of the restaurant and drove off.

Witnesses were able to get a description of the vehicle and also took video to help police, Weiner says.

A special duty officer at Easton Town Center spotted the suspect’s car, and police were able to surround the vehicle. Police say they used a Taser on the man but it had no effect.

The man then reportedly lunged at police with the machete and knife and an officer fired two shots, nbc4i.com reports.