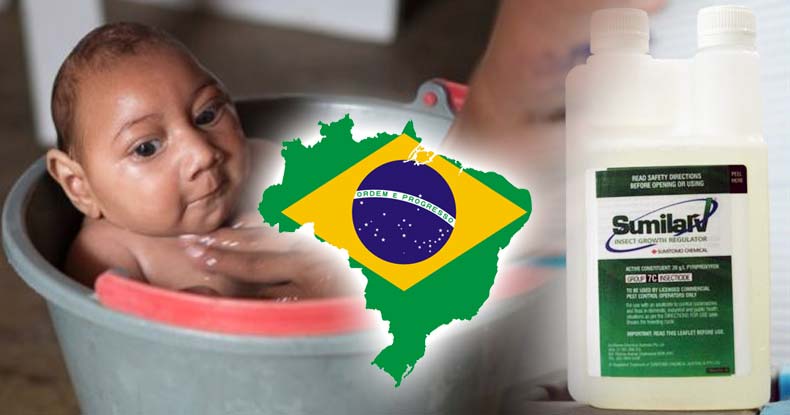 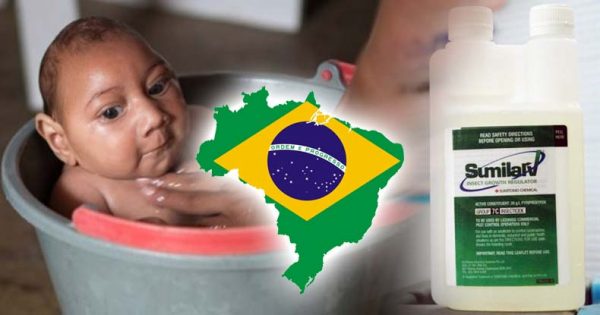 On Sunday, the Free Thought Project reported on the recent information released by the Physicians in the Crop-Sprayed Towns (PCST), who revealed that the Brazilian government’s assertion that microcephaly was caused by the Zika virus was not substantial. PCST exposed a popular larvacide pyriproxyfen to be the actual suspect.

The chemical, pyriproxyfen, was added to the state of Pernambuco’s drinking-water reservoirs in 2014, by the Brazilian Ministry of Health, in an effort to stop the proliferation of the Zika-carrying Aedes aegypti mosquito.

The report by PCST revealed that the pesticide, sold under the commercial name SumiLarv, is manufactured by Sumitomo Chemical, a Japanese subsidiary of Monsanto.

“Pyriproxyfen is a growth inhibitor of mosquito larvae, which alters the development process from larva to pupa to adult, thus generating malformations in developing mosquitoes and killing or disabling them. It acts as an insect juvenile hormone or juvenoid, and has the effect of inhibiting the development of adult insect characteristics (for example, wings and mature external genitalia) and reproductive development. It is an endocrine disruptor and is teratogenic (causes birth defects).

“Malformations detected in thousands of children from pregnant women living in areas where the Brazilian state added pyriproxyfen to drinking water is not a coincidence, even though the Ministry of Health places a direct blame on Zika virus for this damage, while trying to ignore its responsibility and ruling out the hypothesis of direct and cumulative chemical damage caused by years of endocrine and immunological disruption of the affected population,” according to the report by Physicians in the Crop-Sprayed Towns.

In a move that would never happen in America, the Brazilian government actually listened to the group of doctors and suspended the use of pyriproxyfen, pending further study.

In a communique, the state government said that “the suspension was communicated to the 19 Regional Health Coordinating Authorities, which in turn will inform the respective Municipal Monitoring services” in all cities in the state, according to Fox News Latino.

Up until now, Brazilian scientists have been attributing the increase in microcephaly to the Zika virus. However, on Sunday, Rio Grande do Sul Health Secretary Joao Gabbardo said that, despite the fact that a relationship between the larvicide and microcephaly has not been proven, the “suspicion” that there may be a linkage had led the organizations to decide to “suspend” the use of the chemical.

Of course, this news is being met with backlash by those who have advocated adding this larvicide to the water supply.

“That is a rumor lacking logic and sense. It has no basis. (The larvicide) is approved by (the National Sanitary Monitoring Agency) and is used worldwide. Pyriproxyfen is recognized by all regulatory agencies in the whole world,” Health Minister Marcelo Castro told reporters Sunday.

Also, the Monsanto affiliate, Sumitomo Chemical also claimed that “there is no scientific basis for such a claim,” adding that the product has been approved by the World Health Organization since 2004 and the U.S. Environmental Protection Agency since 2001.

According to the report by PCST:

Previous Zika epidemics did not cause birth defects in newborns, despite infecting 75% of the population in those countries. Also, in other countries such as Colombia there are no records of microcephaly; however, there are plenty of Zika cases.

The caution and proactive response by the Brazilian government are noteworthy and should serve as an example to officials in the United States who continue to expose citizens to a myriad of toxic chemicals banned in countries across the planet.