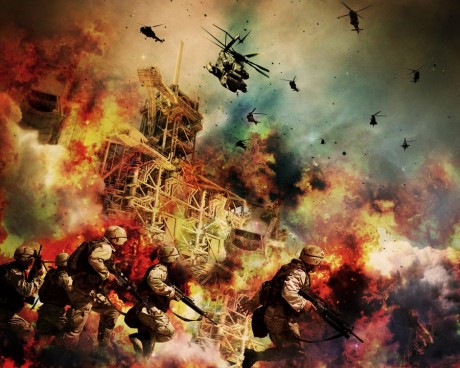 As you read this article, Turkish forces are massing along the border with Syria, and the largest “military exercises” in the history of the Middle East are being held in northern Saudi Arabia.  The Saudis are publicly warning that Syrian President Bashar al-Assad “will be removed by force” if a political solution cannot be found, and Turkey is claiming that it may have to establish a “safe zone” in northern Syria “for humanitarian purposes”.  Saudi Arabia, Turkey and their Sunni allies have poured massive amounts of money and arms into the conflict in Syria, and now that their Sunni insurgents are on the verge of total defeat, they are trying to come up with a way to justify going in there and doing the job themselves.

For the Saudis, their focus is on trying to convince everyone that Syrian President Bashar al-Assad is an extremely dangerous dictator that must be removed at all costs.  The following comes from the London Independent…

Syrian President Bashar al-Assad will be removed by force if the peace process fails, Saudi Arabia’s Foreign Minister has said.

“Bashar al-Assad will leave – have no doubt about it,” Saudi Arabia’s Foreign Minister Adel al-Jubeir told CNN. “He will either leave by a political process or he will be removed by force.”

Saudi Arabia has sent troops and fighter jets to a Turkish military base ahead of a possible ground invasion of Syria.

So precisely who will be doing the “removing” if force is necessary?

Are the Saudis ready to send in ground troops?

Saudi Foreign Minister Jubeir made clear that his country’s troops would not go it alone.

“I can tell you that there is some serious discussion going on with regards to looking at a ground component in Syria, because there has to be a possibility of taking and holding ground, that one cannot do from the air.”

“We are saying we will participate within the U.S.-led coalition, should this coalition decide to send ground troops into Syria, that we are prepared to send special forces with those troops.”

But if the Saudis try to take Damascus and remove Assad by force, the Syrians and their allies will certainly fight back.  That means that the Saudis will be fighting Hezbollah, the Iranians and the Russians.

Needless to say, Saudi Arabia is going to need a lot of help to do that.

So that may explain why Saudi Arabia has organized the largest “military exercise” in the history of the Middle East.  CNN finally reported on this gigantic gathering of military forces in northern Saudi Arabia earlier today…

The news agency did not provide much information on what the exercise entails but called it “the largest in the region’s history.” The agency said it will involve air, sea and land forces.

As I discussed yesterday, 350,000 soldiers, 20,000 tanks, 2,450 warplanes and 460 military helicopters are reportedly gathering for these “military exercises”.

To me, that seems to be a great deal of overkill if the goal is just “training”.

Here is more about these “exercises” from RT…

The Saudi state agency made the announcement on Sunday, adding that participating troops will begin arriving in “the next few hours.”

The oil-rich nation described the exercises as “the largest and most important” military drills in the region’s history.

The so-called “Northern Thunder” exercise will take place in the north of the country and will include air, sea and land forces. SPA said that it will show that Riyadh and its allies “stand united in confronting all challenges and preserving peace and stability in the region.”

So are these forces massing for a ground invasion of Syria?

In the end, we probably won’t have to wait too long before we find out the answer.

Meanwhile, Turkish officials continue to assert that they may have to establish a “safe zone” for refugees in northern Syria.  Since thousands of refugees are continually pouring their direction, they claim that they have no other choice but to go in and take control of the situation.

In fact, Turkey has already established several very large refugee camps on the Syrian side of the border…

Some 100,000 Syrian refugees are being looked after in camps inside Syria close to the Turkish border, including 35,000 who this month fled a Russian-backed regime offensive in northern Aleppo province, a top Turkish official said Friday.

Turkish Deputy Prime Minister Yalcin Akdogan, whose country has come under increasing pressure to open its border to people fleeing the violence, said the refugees were being accommodated in nine camps just across the border with Syria.

But make no mistake – this is not just about helping refugees.

The truth is that ISIS has been using Turkey as a home base for years, and hundreds of millions of dollars of ISIS oil has been shipped into Turkey where it has then been sold to the rest of the world.  Barack Obama knows about all of this, and yet he has refused to do anything to stop it.

To the east of Aleppo, Kurdish forces are, with American support, eyeing the remaining ISIS strongholds along the Turkish border — Jarablus and Manbij. The U.S. wants ISIS out, to remove its access to resupply of materiel and fighters from Turkey.

Meanwhile, Turkey, America’s NATO ally that is engaged in a brutal but often unseen war with the Kurds’ allies in Turkey’s southeast, doesn’t want the Kurds to advance, and may stop at nothing to prevent that.

Fortunately, the Russian bombing campaign has pretty much put an end to the endless parade of ISIS oil trucks that were entering Turkey, and now the primary supply line to Sunni militants in the strategically important city of Aleppo is about to be cut off.

The corridor that runs through the city of Azaz is vitally important, and the Prime Minister of Turkey recently insisted that the Turkish government “will not allow Azaz to fall”…

Turkey shelled YPG positions for a third straight day on Monday to try to stop its fighters seizing Azaz, just 8 km from the border. Ankara fears the Kurdish militia, backed by Russia, is trying to secure the last stretch of around 100 km along the Syrian border not already under its control.

“We will not allow Azaz to fall,” Davutoglu told reporters on his plane on the way to Ukraine. “If they approach again they will see the harshest reaction,” he said.

Unfortunately for the Turkish government, it appears that Azaz is already slipping away from the militants.  The following was reported by an Iranian news source…

Ankara is likely to take action to counter the Syrian military and allied groups on choking up a supply link on which militants relied to get weapons and logistics.

Syrian troops and Lebanon’s Hezbollah fighters have retaken the town of Azaz, located to the northwest of Aleppo, prompting Saudi Arabia and Turkey to hint at deployment of ground forces to the region.

Asked if Ankara might act to reverse the gains, Turkish Prime Minister Ahmet Davutoglu (seen below) said on Friday, “Wait for the next few days and you will have the answer,” Turkish paper Hurriyet reported.

Wait for the next few days and you will have the answer?

That sounds rather ominous.

Like I said yesterday, I don’t think that I have ever seen a scenario which was more likely to lead to World War III than the one that we are watching play out right now.

Do Saudi Arabia and Turkey actually expect to waltz into Syria and start taking territory without a response from the Syrians, Hezbollah, the Iranians and the Russians?

And if fighting does break out, how is the United States possibly going to stay out of it?

The truth is that Saudi Arabia and Turkey would never invade Syria in the first place without the express approval of the Obama administration.

The next couple of weeks are key.  If we can get into early March without an invasion, by that time Saudi Arabia and Turkey may have missed their window.  The troops gathered for the massive military exercise in northern Saudi Arabia will start to go home, and by then the Sunni militants remaining in Aleppo will probably be pretty much completely defeated.

But will Saudi Arabia and Turkey really be willing to walk away after pouring so much time, effort and money into the conflict in Syria?  They had dreamed of turning Syria into a full-blown Sunni nation, and if they give up now Syria will end up being dominated by Iran and Hezbollah.  It will be a result that is far worse than if they never tried to overthrow Assad in the first place.

So my gut feeling is telling me that Saudi Arabia, Turkey and their Sunni allies are not done in Syria.  But their obsession with that country threatens to plunge us into World War III, and if that happens the consequences will be felt by every man, woman and child on the entire planet.