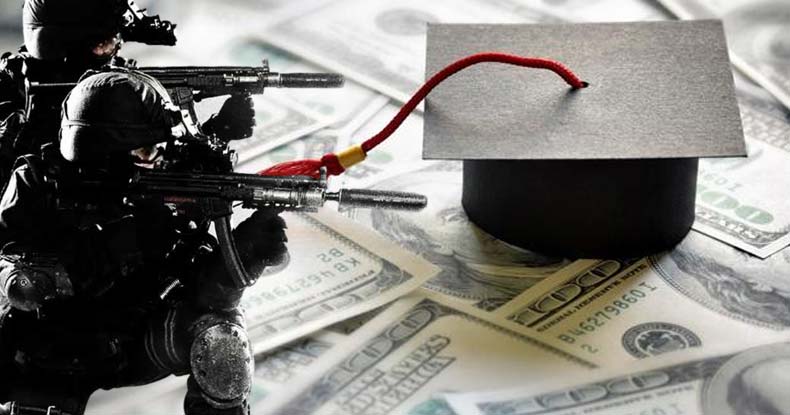 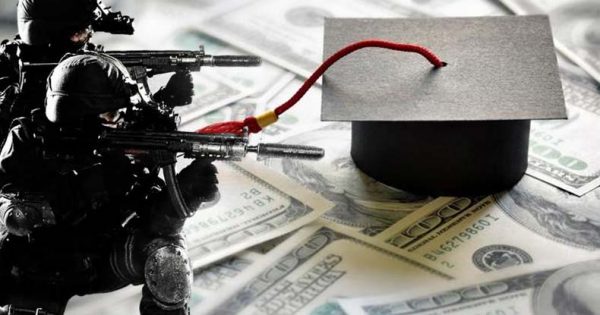 Houston, TX – In what could be a story straight out of the Onion, but sadly played out in reality, a Texas man was arrested by seven heavily armed U.S. Marshals for failing to pay an almost 30-year-old student loan debt.

The man, Paul Aker, 48, said he was caught off-guard by the heavily armed agents that showed up at his home to arrest him for failing to pay the nearly 3-decades old debt.

“They grabbed me, they threw me down,” Aker told the Daily News on Tuesday. “Local PD is just standing there.”

According to a report by the NY Daily News:

He said he noticied a suspicious truck in front of his house on Thursday morning, and when someone approached, he ran back into the house. Later that morning, a bunch of armed Marshals with combat weapons showed up at his door.

Eventually he was told it was about a 30-year-old student loan.

The U.S. Marshals said later in court that they had the firepower because Aker had a gun, but he disputes that.

“But you were already at my door,” he said. “It was because they knew I was a registered gun owner.

Aker’s arrest for a 30-year-old, $1,500 dollar debt is disturbing enough; but taken in concert with the fact that simply being an owner of a firearm, a protected right under the U.S. Constitution, was reason enough for agents to arrive in combat gear and with fully automatic weapons raises the ominous specter of the police state rising.

After being arrested, Aker was held at the federal building in downtown Houston, before being brought to a courtroom, where a “prosecutor,” judge and county clerk were present, according to the NY Daily News. Aker said the alleged “prosecutor” was really a collection lawyer.

“Then I get a lecture (from the judge) about the United States and stealing from the government,” Aker said.

According to the NY Daily News:

Aker told The News that he was ordered to pay $5,700 for the loan, including interest. However, Aker was also ordered to pay for the cost of the morning arrest — nearly $1,300. If he didn’t pay that amount by March 1, he said, he was told he would be arrested again.

Aker was shaken by the entire ordeal and is working to secure legal representation. He claims that during the whole process he was never read his rights.

“I am still shaken,” Aker said. “I had to go to work yesterday, and it was hard to drive to work, for the fear of someone coming. I am looking out the window and I have things to do today, and I am still afraid to go outside.”

The average student loan debt for a 2015 graduate was approximately $35,000, according to the Wall Street Journal. The criminalization of those who can’t afford to repay a student loan may become a more common phenomena, with a report by Fox 26 claiming that U.S. Marshals have plans to serve up to 1,500 warrants on people who have failed to repay their student loans.

Texas Rep. Gene Green (D) sees a problem with using U.S. Marshals to act as muscle to collect these loans for debt collectors and lawyers.

“There’s bound to be a better way to collect on a student loan debt that is so old,” Green told Fox 26.

According to a report by Fox 26:

Green says as a result, those attorneys and debt collectors are getting judgements in federal court and asking judges to use the US Marshals Service to arrest those who have failed to pay their federal student loans.

Our reliable source with the US Marshal in Houston say Aker isn’t the first and won’t be the last.

They have to serve anywhere from 1200 to 1500 warrants to people who have failed to pay their federal student loans.

It is extremely worrisome that armed agents of the state are being used to bully people into paying delinquent student loan debt. There has to be a more intelligent manner in which to attempt to reconcile these debts than to send heavily armed men to arrest those either unwilling or more than likely unable to pay.

It speaks to the nature of the state itself that the default position is virtually always one of coercive force rather than to intellectually assess the means that will most likely provide the desired result – a reconciled debt.

When all you have is a hammer, everything begins to look like a nail.