It’s hard to watch the media downplay all these bizarre animal events as if they just have no idea whatsoever that we’re under continual assault by ever-increasing radiation in our environment.

Last month a hunter’s dog was attacked by a mountain lion that had a set of teeth literally growing out of the top of its head. 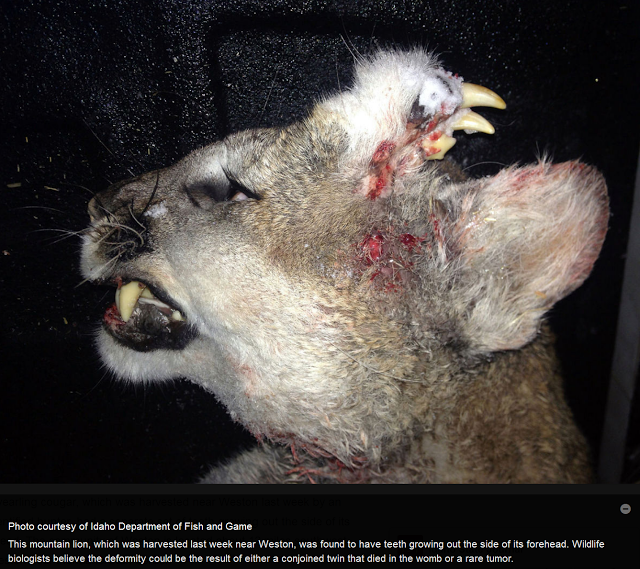 The mainstream media reported on it as if it just has people “scratching their heads” as to what could possibly cause such a deformity, like these deformities aren’t popping up more and more these days and especially in the western half of the U.S.

“It has all of us scratching our heads,” biologist Zack Lockyear told the State Journal. “It’s a bizarre situation and a bizarre photo.”

Yeah, what could possibly be causing such strange deformities? Stock at Nuke Pro pointed out that the State Journal, the same outlet in Idaho that first reported on the mutated lion, was at the same time discussing sending even more radioactive materials to the Idaho National Lab for “vital spent fuel research” — despite a 1995 agreement reached to stop adding more spent fuels to the facility because it was contaminating water aquifers there.

No one denies that safety is primary, but INL is Idaho’s fifth largest private employer with some 3,900 employees earning an average salary of $88,635, according to Peters. Let’s get it right.

Yeah. Screw safety. Let’s get it right by sending more dangerous, aquifer-contaminating radioactive materials to Idaho! Because jobs.“Spent nuclear fuel is the most dirty, most dangerous byproduct of the nuclear energy process. They want more of it. Damn the lions, we need jobs!,” Stock wrote.

The lion and the lab were curiously located in the same part of Idaho, by the way.

But governments and corporations just keep upping the ante and downplaying the danger each time a new story comes out like this with the news media in tow, dutifully acting surprised again and again at all the mass animal die-offs and weird mutations that keep popping up everywhere.