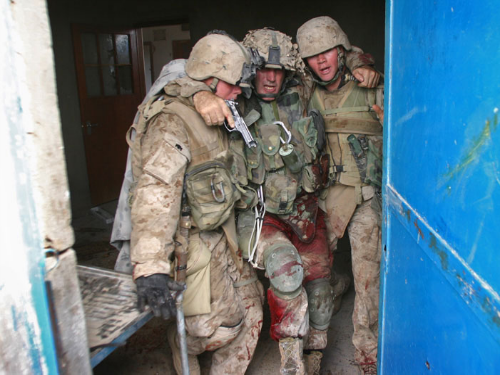 Decorated US Marine Corps veteran Chris Marquez, admitted that he was robbed by several youths at a McDonald’s in Washington DC. The incident occurred last Friday, and the police are looking for 5 young men between the ages of 16 and 21. The group surrounded his table while he ate and asked him “Do you believe black lives matter?” before calling him a racist.

“I felt threatened and thought they were trying to intimidate me, so I figured I’m just going to keep to my food, eat my food and hopefully they’ll leave me alone,” he said in an interview. He doesn’t remember what happened after that, but when the manager reviewed the surveillance footage, he told Marquez that after he left the restaurant, one of the teens knocked him unconscious. They then beat him while he was on the ground and stole his wallet.

The Marine was later taken to the hospital and treated for his injuries, which included head trauma and an eye contusion. Marquez claims that he has trouble sleeping due to a chronic sharp pain in his head, and he believes that he was targeted by the kids for being white.

Marquez served for 8 years in the Marine Corps, and received the bronze star during his first tour in Iraq. During the Battle of Fallujah, an embedded reporter captured a photo of him alongside two other Marines, which became one of the most iconic images of the war. He can be seen on the left in the image above, carrying 1st Sgt Brad Kasal after a firefight.