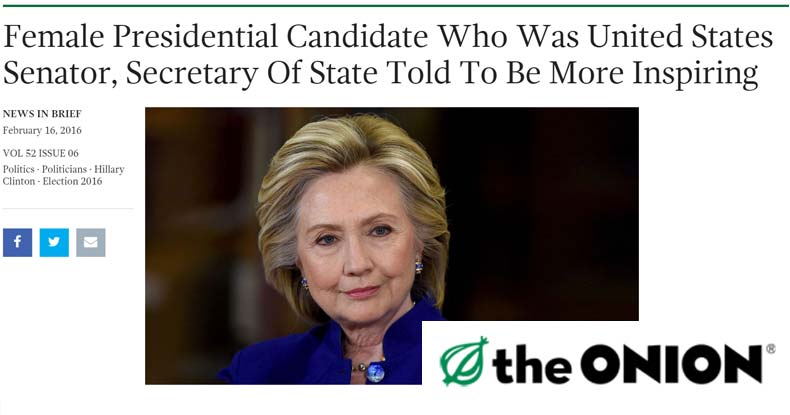 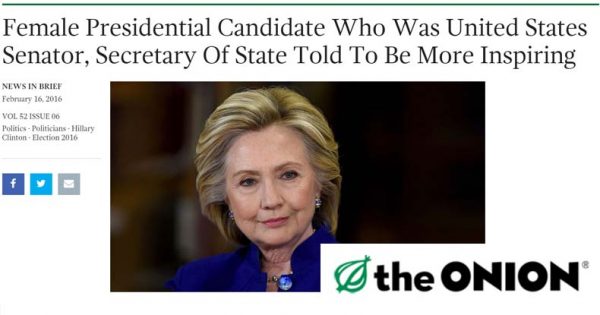 When it was revealed in January that satirical news outlet, The Onion, had been purchased by Univision Communications (which is co-owned by one of Hillary Clinton’s biggest fans, top campaign donor, and pro-Israel fanatic, Haim Saban), it was if the world suddenly held its breath to see if the move would be the outlet’s downfall.

Now, it appears we have our answer. On Tuesday, an apparent attempt at satirical understatement in actuality proved to be nothing less than a blatant propagandistic fluff piece touting Clinton’s ostensibly stellar career.

“Female Presidential Candidate Who Was United States Senator, Secretary Of State Told To Be More Inspiring,” read The Onion’s not-at-all-opaque headline. And the nauseating attempt at tongue-in-cheek praise didn’t stop there.

According to the short ‘article,’ Hillary’s media advisor, Jim Margolis, urged “the woman — who overcame entrenched societal biases to build a successful legal career, became the first female senator elected in the state of New York, oversaw the Department of State during a period of widespread international tumult, and, if elected, would be the first female president in American history — to be more uplifting to voters.”

What The Onion attempted to convey through highlighting the basic bones of Clinton’s resume is the journalistic equivalent of bragging rights at a pissing contest. It’s a blowhard list of hollow career accomplishments wholly lacking in substance and ethical accountability. Those able to distinguish substantive achievements from a list of previous employment should only be insulted by the transparent farce — and a tombstone bearing the name of The Onion such propaganda represents.

But this doesn’t come as much of a surprise. Univision co-owner and chair, Haim Saban, together with his wife, Cheryl, have been Hillary’s most generous campaign backers — shelling out $2,046,000 for her political campaigns and an additional minimum of $10 million to the Clinton Foundation, “on whose board Cheryl Saban sits,” reported The Intercept. “An extensive New Yorker profile of Saban recalls how Saban publicly described his ‘three ways to be influential in American politics’ in 2009. One was political donations. Another was establishing think tanks (he founded the Saban Center for Middle East Policy at the Brookings Institution in 2002). And the third was controlling media outlets.”

“Univision also owns The Root, and Saban has made attempts to buy The Los Angeles Times and, he says, the New York Times.”

Satire has a well-deserved, rich, and vital place in American politics, but given Univision’s now 40-percent controlling interest and option to purchase the rest, it seems The Onion’s prominent and storied run ends in a cliff. As The Intercept noted, Saban once said, “I’m a one-issue guy, and my issue is Israel.” Taken with his previously-mentioned plot for steering politics, it’s not likely we’ll see any satirical criticism over U.S. support for Israel — much less humorous opprobrium of infamous Israeli tactics — from Onion writers, ever again.

Instead, as the Hillary braggadocio article evidences, it appears The Onion has become the newest satire arm of mainstream, corporate America — vapid agenda and all.

There was, perhaps, a single line in the Hillary article worthy of a traditional Onion jab. It concludes:

“Margolis added that Clinton was too much a part of the establishment she spent decades breaking down barriers to enter.”