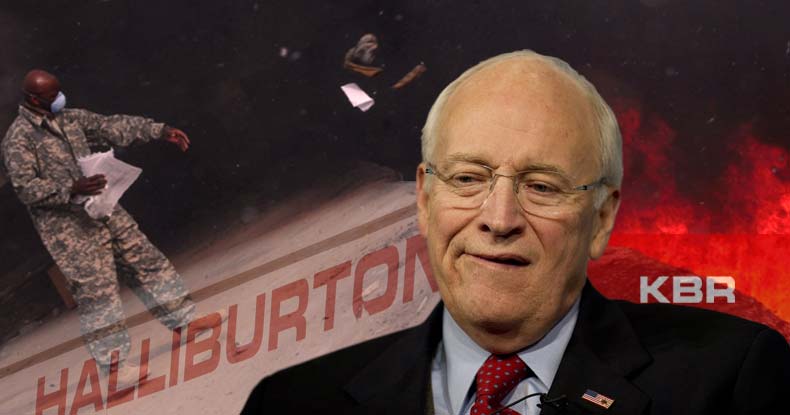 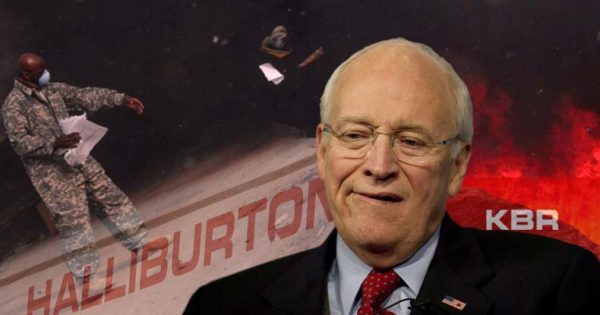 The legacy of death and misery from the invasions of Iraq and Afghanistan continues today, and, once again, Dick Cheney plays a central role. A new book by Joseph Hickman, a former U.S. Marine and Army sergeant, titled “The Burn Pits: The Poisoning of America’s Soldiers” details how soldiers and local civilian populations were exposed to constant streams of toxic smoke from the burning of waste.

The infamous Kellog, Brown, and Root (KBR), which was a part of Dick Cheney’s corporate empire under Halliburton, operated about 250 burn pits which contributed to the $40 billion that Halliburton made during the Iraq occupation. “Every type of waste imaginable” was burned, including “tires, lithium batteries, asbestos insulation, pesticide containers, Styrofoam, metals, paints, plastic, medical waste and even human corpses.”

This reprehensible practice proves yet again that nothing is sacred when it comes to the military machine.

Just as the U.S. laid waste to Vietnam’s human health and jungle environment with Agent Orange, it wrecked human health and environmental quality in Iraq. That country will suffer from this toxicity for decades, as evidenced by sharp increases in birth defects and cancer and leukemia rates.

Likewise, U.S. veterans and their families are bearing the brunt of this travesty.

“The Burn Pits: The Poisoning of America’s Soldiers” begins with the story of a healthy young soldier sent to Iraq who was constantly exposed to smoke from burn pits. When he returned home with respiratory problems, the Veterans Administration (VA) denied him care, and he later developed brain cancer and died.

Those who do survive are having children with birth defects at a rate three times higher than normal, according to the book. The denial of medical coverage by the VA for burn pit-related illnesses is a central strategy in denying that burn pits even posed a health hazard.

Beau Biden, the son of vice president Joe Biden, died of brain cancer after serving in Iraq in the vicinity of burn pits. Even this tragedy, which is similar to many stories of exposure and death, never brought attention to the issue of burn pits.

Salon interviewed author Joseph Hickman, who provided even more shocking details, and how the Department of Defense (DoD) does all it can to keep this knowledge from the public.

“I think the Department of Defense does its best to squash this story and so does Veterans Affairs. They really don’t want this out at all.”

Hickson interviewed one former KBR employee who was very reluctant to even talk about burn pits for fear of repercussions, as he was harassed by KBR when he previously came forward about the issue. By using private contractors for such operations, the DoD facilitates these egregious assaults on human and environmental health because contractors are not held to the standards of the military.

This dependency on contractors feeds their tendency for carelessness. According to Hickson, the upper management said at one point, “If they’re going to investigate us over these burn pits, don’t worry about it. If we pull out, they can’t run this base.”

The U.S. government, in its effort to conceal the impact of burn pits, even managed to influence a World Health Organization report that downplayed the effects. It stands in stark contrast to several independent researchers who found large increases in birth defects, leukemia, cancer and other carcinogenic diseased in populations living near burn pits.

“There’s a large group of epidemiologists that absolutely believe that that report was influenced by the U.S. government. Dr. Mozhgan Savabieasfahani, a widely respected environmental toxicologist, has been there and seen the birth defects and how we literally destroyed that country with pollution. There are birth defects there that don’t even have medical names yet.”

The evidence compiled by Hickson and presented in his book makes it downright criminal for the DoD and politicians to continue denying the issue. When veterans suffering from burn-pit illnesses contact their Congressmen, there is silence because they are in bed with the defense industry.

General David Petraeus and other top DoD officials have denied the health effects of burn pits, but veterans have no recourse because they can’t sue the government. There is a lawsuit against KBR, but the DoD will not acknowledge that the burn pits were misused.

While politicians and military brass issue patriotic platitudes about honoring those who serve their country, the reality is that soldiers are just a name and a number, and they’re thrown away when the military machine is done with them. Defense corporations reap billions as veterans and local populations suffer sickness and death.

Please share this article in the hope that exposure can force accountability for the toxic legacy of burn pits.