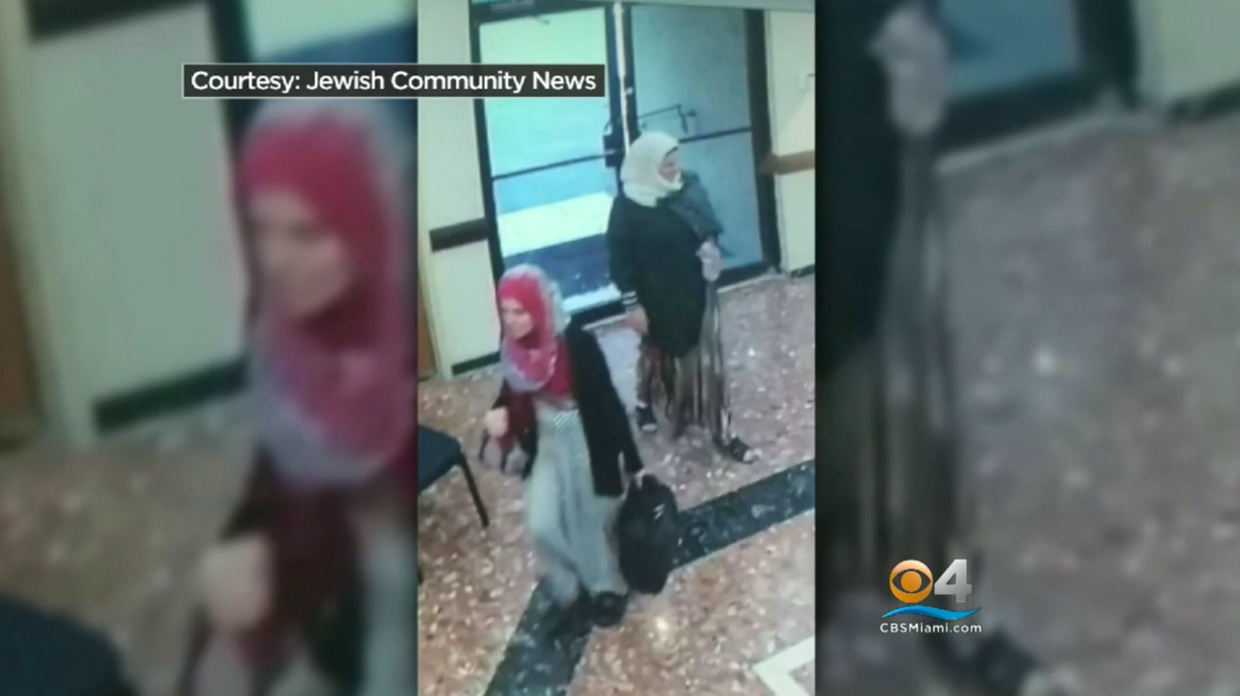 One can only imagine what these Muslimas are up to.

The Miami Jewish community has been on edge for some time. One synagogue was defaced with “Hamas” and swastikas (below). Cars have been defaced with antisemitic messages.

UPDATE: A reader  writes me that “the same exact situation happened in Connecticut a few months back. Didn’t make as much news since it’s not Miami, but pretty interesting and curious to see if there’s any connection between the two situations.”

Jewish community on alert after suspicious activity at numerous synagogues,  Local10.com, February 17, 2016 (thanks to Armaros):

NORTH MIAMI BEACH, Fla. – The neighborhood patrol was out Wednesday night, and some in the North Miami Beach Jewish community were on edge after a group approached several area temples asking suspicious questions.

Two women visited a North Miami Beach temple over the weekend and identified themselves as Muslims. One of the women, who clutched a Quran, asked questions such as when the congregations meet.

They also asked what time services are held, which service was the busiest and how many congregates belong to the temple, according to Yona Lunger, a community activist within the Jewish community.

Police said a similar incident happened on Miami Beach over the weekend at the Beth Israel Congregation, at 770 W 40th St., when two boys in the congregation were approached by a couple asking similar questions.

North Miami Beach police told Local 10 News that they have interviewed the women and do not believe they pose a danger to the community.

However, they are still investigating, along with the FBI.

“We have been teaching the people in our congregation if you see something, say something,” said Rabbi Donald Bixon, who leads the Beth Israel Congregation. “They didn’t feel comfortable, they said something and it was immediately followed up.”

Joshua Klien, a synagogue member, says these incidents are a reminder to remain vigilant.

“With today’s happenings all over, you have to be vigilant,” said Klein.

Lunger, whose patrol works closely with detectives, said maybe it’s a sign of the times that people are still uneasy, and although the women didn’t commit a crime, they did raise a concern.

Sources told Local 10 that another incident was reported at a synagogue in Hollywood. Calls to the Hollywood Police Department were not returned.