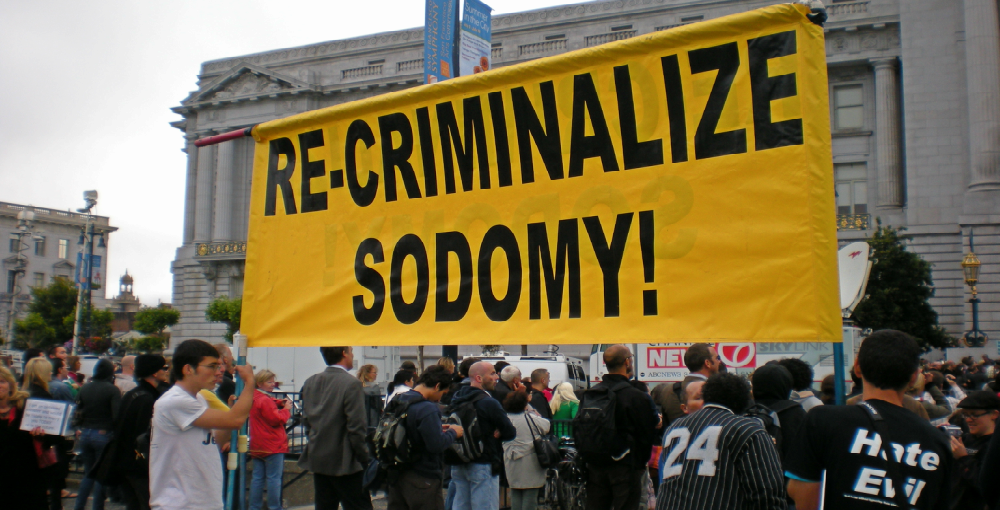 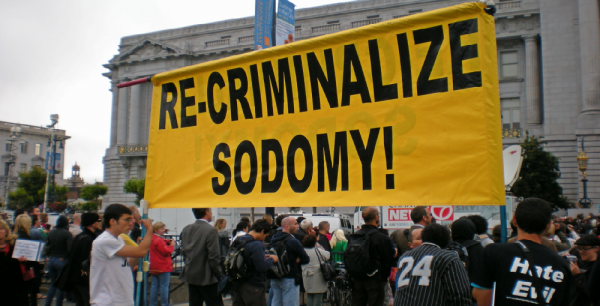 The Michigan State Senate recently cleared a bill, SB 0219, that will move on to the House, which would once again recognize sodomy as a crime.

The bill is addressing animal cruelty. However, there is a provision in the bill that would re-criminalize sodomy as a felony and incarcerate those who engage in sodomy in prison for a maximum sentence of life.

A person who commits the abominable and detestable crime against nature either with mankind or with any animal is guilty of a felony punishable by imprisonment for not more than 15 years, or if the defendant was a sexually delinquent person at the time, a felony punishable by imprisonment for an indeterminate term, the minimum of which shall be 1 day and the maximum of which shall be life.

While I’m not a fan of the prison system because I don’t think it brings justice, I am glad to see that there are still some people willing to take the stand against sodomy. Frankly, I would think the prison system is the last place you would put these people.

Many sodomite publications are already raising their less than 2% voice against it, claiming that Lawrence v. Texas has put the issue to rest.

However, I believe more and more people are being educated on the Constitution and brushfires of freedom are being set in the minds of men, which point them to the only real means of securing liberty and that is God’s Law.

In fact, too many Christians today are buying in to the lie that God’s Law is somehow binding us, rather than a source of freedom.

Theologian R. J. Rushdoony wrote, “To see God’s Law as a limitation on us rather than our empowerment is the beginning of apostasy.” Indeed, it is.

Christ came to set men free from sin (Matt. 1:21), and that includes all manner of violations of God’s Law, including sodomy.

Interestingly enough, those in Michigan are not alone.

Matt McLaughlin introduced a ballot initiative that would provide for death as a penalty for those engaging in sodomy. He’s doing that in California! Talk about being bold as a lion!

Up until the 1960s, every state in our union had anti-sodomy laws. Yet, one by the one, the States, instead of standing firm on the Word of God, began to capitulate to bullies like the ACLU and ultimately to the Supreme Court, which has never been given any authority to rule in the matter at all. Today, there are still just over a dozen states with anti-sodomy laws, including my home State of South Carolina. Sadly, they don’t enforce the law.

The push by the ACLU, who are communists, only emphasizes the goals of the Communists, which were entered into the Congressional record.

With the people understanding our history and beginning to understand how the DC government has overstepped its bounds with regard to the Tenth Amendment, I am hopeful that as people repent, we will begin seeing a country that once again will be blessed by God. Until then, all we can look forward to is more of God’s judgment upon the land.

The embracing and propagandizing of immoral behavior, whether it is among heterosexuals or sodomites is part of what is leading our country down the road of destruction. And lest you think that engaging in these practices is something to be called “liberty,” I’ll remind you that the Lord Jesus Christ said, “Jesus answered them, ‘Truly, truly, I say to you, everyone who commits sin is the slave of sin (John 8:34).'” Submitting yourself to these things does not free you, it enslaves you. This is the reason Christ came and that is to save sinners from their sin, not leave them in it.