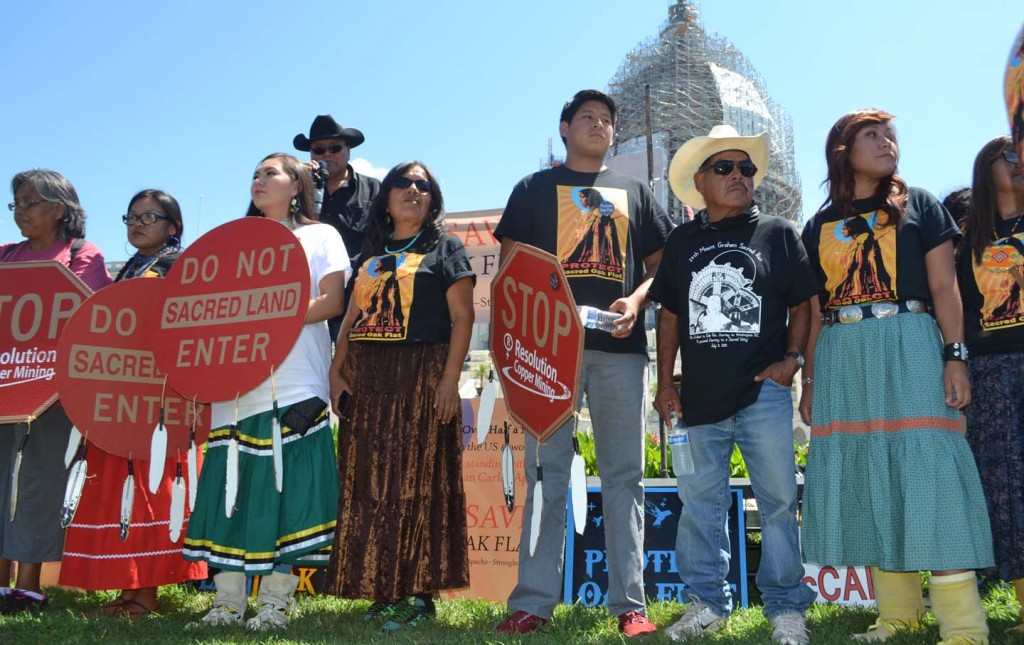 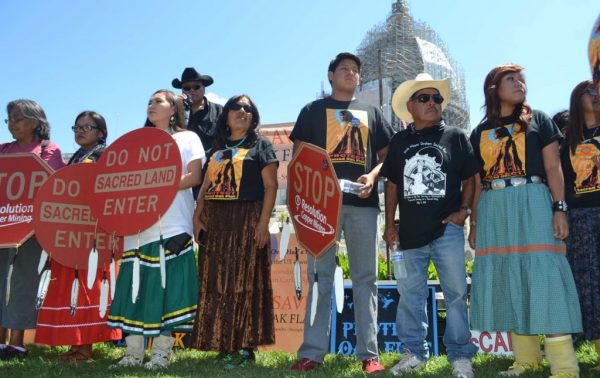 Arizona Senator John McCain was confronted by an Arizona State University student for his support of a controversial mining project which threatens land sacred to the San Carlos Apache.

Phoenix, Arizona – On February 19, Senator John McCain was visiting the Walter Cronkite School of Journalism at Arizona State University’s Downtown campus for an interview series known as “Iconic Voices” when he was questioned about his support of the planned Rio Tinto copper mining project. McCain has received criticism for his role in passing the Southeast Arizona Land Exchange bill as part of the National Defense Authorization Act of 2015. The law allows for the sale of the Oak Flat campground to international mining company, Rio Tinto. Oak Flat is historically important to the San Carlos Apache.

The Apache Stronghold formed in December 2014 in response to a last-minute legislative provision included in the the National Defense Authorization Act of 2015. The provision at issue in the annual Defense Department funding bill grants Resolution Copper Mining, a subsidiary of Australian-English mining giant Rio Tinto, a 2,400-acre land parcel which includes parts of the Tonto National Forest, protected national forest in Arizona where it will create the continent’s largest copper mine.

Some of those lands are considered sacred by multiple Native American communities, including the Oak Flat campground. The area is not recognized as part of the San Carlos Apache Reservation, but it has historically been used by the Apache for trading purposes and spiritual ceremonies.

As McCain was leaving the ASU campus a group of community members came together and questioned him about his dealings with Oak Flat. Laura Medina, an ASU graduate student in the American Indian Studies Master’s program,  challenged McCain directly, shouting “John McCain, You got time to talk about Oak Flat?” Medina stood directly in front of the senator and asked him to take “just a few moments, talk about the environmental impacts.” Medina asked McCain why he won’t talk about the dangers the mining project poses to the water, the air, and the land.

“It is important we keep calling out these politicians who do nothing but spit rhetoric then do corrupt acts against the people,” Medina said in a statement. “Arizona needs to fully understand the environmental destruction that will entail if the biggest open pit mine is only an hour away, Rio Tinto has one of the worst reputations for disrespecting environmental and indigenous rights around the world.”

While McCain met with Ducey and the Navajo nation, activists with the Apache Stronghold — and other groups and nations — rallied outside the museum, holding signs that read “McCain = Indian Killer” and “McCain’s Not Welcome Here.” Eventually, the activists made their way inside the building, locking arms and chanting, “Water is life!”

Inside the museum, John McCain was rubbing elbows with Navajo leaders and snapping photos with the community. One person decided to take an opportunity to confront John McCain with a message about Oak Flat. That person was Adriano Tsinigine. Tsinigine, a high school senior carrying a “Protect Oak Flat” card, walked up to McCain for a picture. Tsinigine told the Phoenix New Timesabout his experience:

“I pulled out my [Protect] Oak Flat card,’ he says. When McCain noticed it, ‘He took it, looked at it, and threw it back at me. How disrespectful to me and to the Apache people. I fully respect McCain as a veteran . . . and as a POW and for sacrificing [what could have been] his life, but I do not respect him as a U.S. senator. As an elected official, he should listen to all of the voices of people, [even] the people who are protesting against him.’

As McCain attempted a backdoor exit, the activists chanted in the hallway with their arms linked. Once they noticed McCain’s convoy making an escape, the group began chasing on foot. They were temporarily blocked by law enforcement but eventually made their way out of the building, chasing the cars as they exited the Navajo nation.

Despite the direct confrontations with the communities who will suffer at the hands of the project, McCain seems undisturbed. After the NDAA 2015 passed McCain issued a statement on his website, arguing that “while a number of Arizona tribal governments raised concerns about the closure of a Forest Service campground called ‘Oak Flat,’ the bill guarantees that Native Americans can continue to access the campground for many years until the mining company needs to mine underneath it.” McCain has also said that historians do not support the San Carlos Apache’s claims that the land has historical and sacred importance to their people.

For a deeper look at the Apache Stronghold please watch the following documentary produced by The Conscious Resistance Network and Just News.

Derrick Broze is an investigative journalist and liberty activist. He is the Lead Investigative Reporter forActivistPost.com and the founder of the TheConsciousResistance.com.