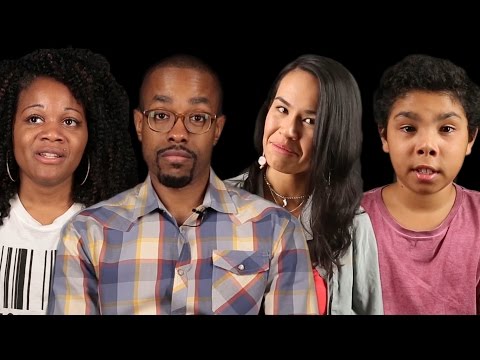 A new Buzzfeed video going viral on YouTube features people who are “triggered” by the word “white,” characterizing white people as arrogant, controlling and selfish.

Entitled People Of Colour From Around The World Respond To “White” – the clip is a three minute guilt trip intended to shame Caucasians into acknowledging how oppressive they are for having been born with the wrong skin color.

Asked to respond to the word “white,” the non-white participants deliver a number of pejoratives, accusing whites of being controlling, privileged, arrogant, naive, selfish, and obsessed with power.

One of the participants says that white people who wallow “freely and shamelessly in their privilege” are “typically male”.

The clip even features a child who asserts that white people “don’t acknowledge what has happened in the past,” presumably referring to slavery. The fact that virtually every race in history owned slaves, that white people were the first to end slavery or that over one million white Christian Europeans were enslaved in North Africa until the middle of the 18th century under the Barbary slave trade isn’t mentioned.

Only at the end of the clip does one individual express a truly non-racist message, that it doesn’t matter what skin color people have.

The video is merely the latest example of a new breed of racism being advanced by the regressive left which attempts to shame white people for having the wrong skin color.

An MTV show entitled White People which was aired last year received a huge backlash after it pressured Caucasians into expressing their ‘white guilt’ on camera.

The show, which was hosted by an illegal immigrant and sought to publicly shame white people for “what they’ve done in America,” wascelebrated by leftist media outlet Salon.com as appealing to those who “enjoy watching white people cry”.

The good news is that the Buzzfeed video has received almost double the number of ‘thumbs down’ to ‘thumbs up’. Despite the best efforts of the regressive left to fan the flames of racial division, most people – including people of color – are completely sick of it.

“MLK wished to live in a world where somebody would be judged on the content on their character not on the colour of their skin,” one YouTube user pointed out in response to the video.

“I’m not even white, but this whole black vs white thing is getting on my nerves,” commented another individual.

“As a black person this video is racist and horrible you just generalised a whole race calling them arrogant and naive and controlling,” added another.

Don’t hold your breath, because racism is only acceptable when it’s directed towards white people. That’s because liberals have invented a new rule which makes it impossible for people of color to be racist.

They assert that racism is only racism if it’s backed by institutional power. But as we document in the video below, the major institutions of academia and the media consistently discriminate against white people to the benefit of people of color – affirmative action and the obfuscation of black crime statistics being two major examples.