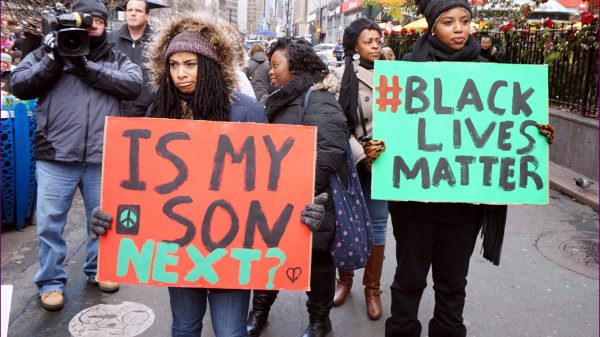 “You’ve got monies that you gotta spend, we have a team that can come and help you spend it.” –cultural sensitivity trainer Dr. Samuel Betances

Black Lives Matter is a growing hate group that has gained the support of President Obama and the rest of his racist administration. The group is built on the premise of “white privilege” and the commonly told lie that America’s institutions are built on racism. White privilege is a concept pushed in higher education that preaches whites are inherently racist and the beneficiaries of a system designed exclusively for their benefit. They also claim that only whites can be racist because minorities do not have the institutional power behind them to discriminate. Blacks and other minorities certainly have the backing of the Obama administration and the Justice Department as white people are the only demographic charged with hate crimes for offenses committed against minorities. If minorities commit violent crimes against whites, they are not charged with hate crimes. That is institutional power that cannot be bought. Black Lives Matter is a growing movement operating on the premise of white privilege and getting away with acts of violence using the issue of fake oppression as an excuse. They are becoming the Red Brigades of our time.

Where does white privilege education come from? Who can be held responsible for the false teachings that are creating the seething hatred and calls for racial warfare in our society?

It seems to have started back in 2009 when Dr. Tony Evers, superintendant of Wisconsin DPI launched a program known as Create Wisconsin. This program was designed to help children who have been inappropriately labeled as being in need of special education. The program was based on the idea that minorities were disproportionately labeled as being in need because of how far behind they were compared to their white counter parts. This shows the true heart of racism as the left assumes all minorities need their assistance because they believe blacks are not as capable as whites.

Based on an interview with a Wisconsin teacher it seems there was a little more motivating the labeling of minority children, federal funding. There is big money in white privilege education. Instead of spending this money on educational supplies however, Dr. Evers decided to invest in cultural sensitivity training to alleviate the alleged white privilege in his schools. Teachers would receive this training and they would essentially have to admit that being white makes them racist in order to move on. This also occurs in our universities in multicultural education programs. This author was personally targeted in a social work program for not going along with the white privilege curriculum.

All of this is based on lies that the radical left uses to push the claim that racism still exists in the U.S. In this case it seems to start with the idea of falsely labeling children as being in need of special education and blaming the white man’s system of governance as being the source of the problem. This seems to be the origins of creating generational poverty as well. We know that it was the Democrat Party that intentionally gave welfare money to black mothers in order to create dependency and a permanent voting class. This cycle of dependency is what is most likely responsible for generational poverty and lower achievement among minority students.

The real history of America and the Democrat Party is far different from what we are being taught. The Republican Black Caucus once admitted that the NRA was formed to provide free slaves with the means to protect themselves from the Klu Klux Klan, which were all Democrats. Perhaps the effort to cover up the lies of the Democrat Party is what prompted a DPI employee named Laverne Jackson Harvey to make this statement.

“There seems to be a national trend that can be attributed to the conservative agenda that currently exists with former closet racist leaving the closet and entering the light to write policies that support covert and overt racism that impacts students of color.”

This is such a blatant lie that explains why American history is no longer focused on in public schools. A real examination of history would show an explicit display of violent racism brought upon blacks by the Democrat Party, and a Republican Party that fought for civil rights.

White privilege is being used to assist the Presidents fundamental transform of America. The goal of white privilege is not to create cultural sensitivity, but to eradicate what the left hates the most, the white Christian male. It is a dangerous ideology that will turn the current generation of kindergartners into tomorrow’s Nazi’s ready to round up all who stand in the way of a multicultural utopia. If we are to stop this and take our children’s minds back from these radical hate mongers we have to put the love of them, the love of country and the desire to pursue truth above all else. Even if it means losing your lifestyle that you have worked so hard for. That is the difference between you and the left. They hate this society to its core and could care less if it collapses, while you love and hold dear to what you have worked for. They have been using this against you to keep you silent while they shove this evil agenda down our throats.