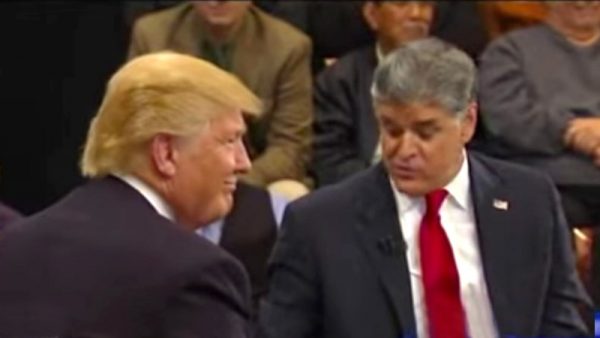 This may be the best reason yet to vote for Donald Trump. The candidate was a guest on Fox News’ Hannity Show with Sean Hannity on Monday night. The show was being taped in front of a crowd of Nevada voters, giving the GOP frontrunner ample opportunity to work the crowd for votes.

Boy, did he ever succeed in making a splash with the Nevada crowd.

When Hannity asked Mr. Trump if, as President, he would have his Attorney General prosecute Hillary Clinton, Trump’s response brought immense joy to the crowd.

“You have no choice… In fairness, you have to look into that. Now maybe she can prove her innocence. But it just seems to me that the public knows everything that they’re going to know. Emails have come out. She seems to be guilty. But you know what, I wouldn’t even say that. But certainly, it has to be looked at. If a Republican wins, if I’m winning, certainly you will look at that as being fair to anyone else. So unfair to the people that have been prosecuted over the years for doing much less than she did. So she’s being protected, but if I win, certainly it’s something we’re going to look at..

She’s running a very important race for herself.”

I think Mr. Trump is 100% correct on the Hillary Clinton question. I believe that she is running the race of her life, not only because she wants to be President, but because she is very worried about going to jail for her crimes.

On the second question, dealing with federal control of state land – Donald Trump is just flat out wrong. This speaks to the larger problem that we conservatives have with Mr. Trump; he just isn’t that “bought-in” to protecting all of our constitutional values. We see the same problem when he defends eminent domain abuses. These are real problems for the Trump campaign, and if Mr. Trump wishes to win over conservatives, he’ll need to ‘adjust’ his perspective on these issues, which by the sound of his response to the woman questioning him on the show, he seems to be considering.

However, the land question was most certainly drowned out by his excellent response to the question of what he’ll do to Hillary Clinton.

Onan is a graduate of Liberty University (2003) and earned his M.Ed. at Western Governors University in 2012. Onan lives in the Atlanta area with his wife, Leah. They have three children and enjoy the hectic pace of life in a young family. Onan and Leah are members of the Journey Church in Hiram, GA. He is also the chief editor atEagleRising.