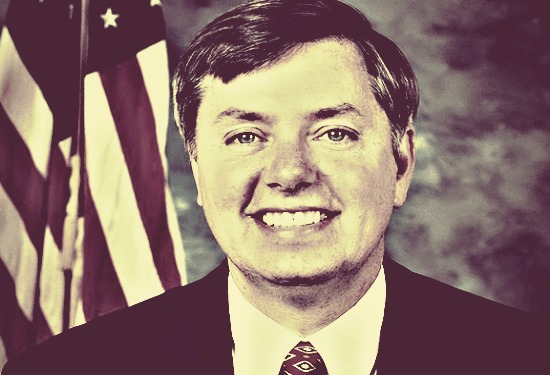 A lot of people have made jokes about this speech, but watch again. I don’t even think Graham was joking for most of it. He might have been drunk, but even the supposed “jokes” he makes here actually appear pretty serious if you look at him.

Graham just basically admitted the establishment GOP has gone down in total flames and this country is screwed as people are about to elect “the most dishonest woman in the country” as president.

Here are some of Lindsey’s greatest hits (via Salon):

On his failed campaign

Noting that the supposed “moderate” in the race, John Kasich, just joked about “women leaving their kitchens” and “nice guy” Ben Carson once “tried to kill his cousin and hit his mother in the head with a hammer,” Graham asked, “How did I lose to these guys?”

“If you killed Ted Cruz on the floor of the Senate, and the trial was in the Senate, nobody would convict you,” Graham said, referencing the Tea Party senator’s unpopular reputation with his colleagues.

“A good Republican would defend Ted Cruz after tonight,” Graham remarked, before adding, “That ain’t happening.”

“I was asked the hardest question in my political life: Do you agree with Donald Trump that Ted Cruz is the biggest liar in politics?” he said. “Too close to call.”

And Graham did not hold back from jumping on the Cruz birther bandwagon for a night.

“I will say that our Canadian is better than your Kenyan,” he quipped.

“I know exactly when Ted is going to drop out of the race. March 12 — that’s Canadian week in Myrtle Beach, when all of our Canadian friends get 10 percent off.”

“The Secret Service’s main job if he’s president is to keep him hydrated.”

I’m “literally running out of adjectives” to impugn Trump, Graham joked to reporters.

“I don’t think he understands what makes America great.”

“The most dishonest person in America is a woman who is about to be president. How could that be? My party has gone bats*** crazy,” Graham joked to raucous laughter in the room Thursday night.

“I think we’re likely to lose the last best chance in a long time to win the White House. I think that the consequences of us losing are going to be monumental for domestic and foreign policy, and the [Supreme Court].”

He also says women have come a long way, as the most dishonest person in the country is a woman… that Americans are about to elect as president.

It’s supposed to be comedy, but it’s actually horrifying if you think about it for longer than five seconds together.