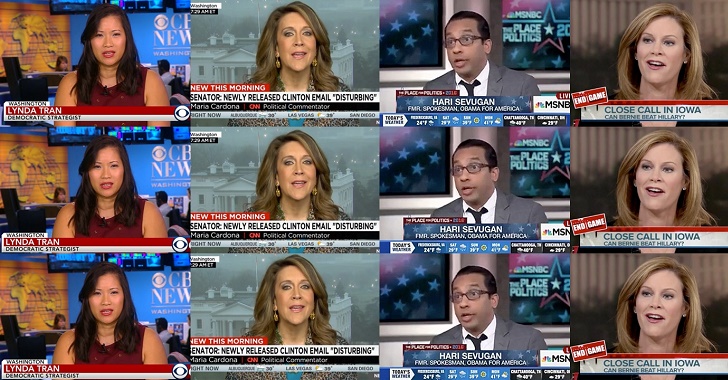 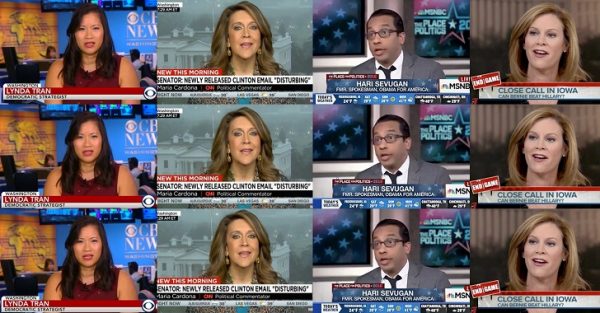 United States — So-called political pundits are an ubiquitous sight on mainstream news, particularly during the run-up to a presidential campaign — but their ties to the candidates they analyze remain obfuscated, downplayed, or altogether left out by host networks.

This cozy bedfellow relationship might not be an issue if the extent of their involvement with the candidates’ campaigns were forthrightly revealed by the networks. Instead, the failure by omission not only muddies the line between impartial analysis and campaign propaganda, it also marks a failure of journalistic integrity.

“Journalism 101 teaches that reporters and TV news hosts must properly identify their sources and analysts,” Ithaca College associate professor of journalism, Jeff Cohen, told Fang. The Intercept’s requests for comment from NBC, CBS, CNN, and ABC News were not answered.

Precision Strategies, co-founded by Stephanie Cutter, has been hired by Hillary Clinton’s campaign, which has paid the firm $120,049 since June 2015 to perform “digital consulting.” Cutter, meanwhile, made appearances on multiple networks without so much as a hint of her current association with Clinton’s campaign. Instead, she is often introduced as a former campaign official for President Obama. Such association with a campaign doesn’t exactly lend itself to unbiased opinion.

“I think that Hillary Clinton has done everything right,” Cutter told NBC’s Meet the Press prior to the first presidential primaries on January 17. “She has run a good campaign. She has outperformed in debates. She’s raised money. She’s got a great ground game.”

It stands to reason the viewing audience had no knowledge of Cutter’s firm’s affiliation with Clinton’s campaign — and her virtual unavoidable bias in such a proclamation. But had they been aware, perhaps viewers would have been better positioned to judge for themselves whether or not that statement rang true.

As Fang noted, Cutter had previously appeared on Meet the Press, also without any indication by hosts of her association with the Clinton campaign — but also proffering similarly pro-Hillary statements. On ABC News’ This Week, Cutter appeared as a Clinton “supporter,” and on CNN, she was called a “Democratic strategist” — but those networks failed to divulge the direct involvement of Precision Strategies with Clinton’s campaign.

Maria Cardona, who contributes to CNN, has long served as a partner with lobbying firm, the Dewey Square Group. Dewey Square partners have not only contributed and fundraised for the Clinton campaign, the firm has been paid for consulting work for Hillary’s Super PACs. Cardona, Fang noted, contributed the individual maximum to the Clinton campaign — and is a DNC superdelegate who “pledged support for Clinton last year, before any of the primary elections.”

Again, Cardona is most often introduced or presents herself on CNN’s various networks as “a neutral Democratic strategist or CNN contributor,” and occasionally as a Clinton “supporter” — but not once, The Intercept found, as a direct campaign contributor or as a Dewey Square paid campaign consultant.

Hari Sevugan and Lynda Tran are directly involved, through 270 Strategies, with Hillary Clinton’s campaign, as well. Tran co-founded 270 Strategies, whose website proudly boasts of its consulting advice to her campaign; and, as Fang explained, the firm was paid $75,200 by one of Hillary’s Super PACs — and $301,621 by a second. Sevugan and Tran make regular appearances on MSNBC and CBS News — without any divulgement about the nature of their affiliation with the Hillary camp, of course — where they often downplay Senator Bernie Sanders legitimate challenges to Clinton’s popularity.

Do you still think the game isn’t rigged?

After Fang’s requests for comment from both CBS and 270 Strategies went unanswered, Tran’s appearance on CBS News on Saturday came with an even more telling introduction than usual:

“Before we start, we should disclose that several employees of 270 Strategies do some work for the Hillary Clinton campaign, however, Lynda, you do not.”