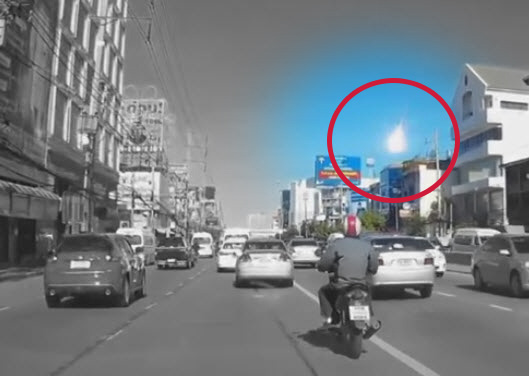 A space rock calculated to be as wide as a two story building is tall which exploded with the equivalent of 13,000 tons of TNT entering Earth’s atmosphere was missed by NASA on February 6th. Completely.

This is despite the fact that NASA has a whole entire program specifically dedicated to spotting potentially dangerous space rocks entering the Earth’s atmosphere.

NASA made the announcement after the fact, but the agency was itself informed of the event by another agency, which many have speculated is the military. (Other guesses are the NSA, which spies on everything everywhere, including space.)

The government isn’t telling anyone exactly what technology was used to hone in on this rock entering the atmosphere, but astronomer and Slate science writer Phil Plait noted that there three possible ways:

“I can think of three ways to detect a big fireball in this case: Satellite observations, which would image them directly; seismic monitors, which can detect the explosion as the sound wave from the blast moves through the ground; and atmospheric microphones, which can detect the long-wavelength infrasound from an event. This may have been detected by any combination of these (though since it was over the open ocean, seismic monitors seen unlikely).”

The fireball fell over the Atlantic ocean in a place we are told is 600 miles away from the nearest inhabited place, but had it taken a slightly different path, it would’ve come down over a major city, rattling people’s windows and scared the hell out of everyone with absolutely no warning whatsoever from our so-called space agency.

NASA tries to pretend they have everything space-related monitored and under control at all times with all these comets and asteroids we’ve been seeing lately (which, is it just me, seems to be on an uptick?), but as stories like this continue to come out, it doesn’t leave anyone with the impression they actually do.

Let’s be honest with ourselves: NASA can make all the new programs they want, but it is pretty clear that the public wouldn’t be warned in the event of a real Earth-leveling asteroid hurling toward the planet.

Guess we should all watch out for the military moving into their underground bunkers on that one.