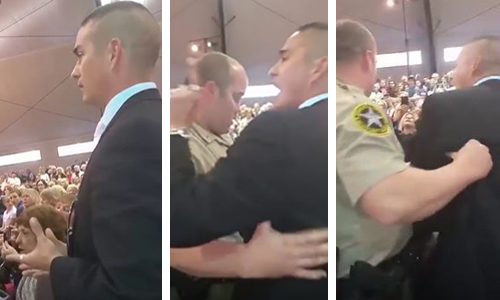 At a Hillary Clinton rally in Bluffton, South Carolina on Friday, a Marine veteran was removed for calling out Hillary Clinton’s blatant lies regarding the coverup of Benghazi.

The marine interrupted former president Bill Clinton’s speech to ask him what his wife would be doing about the Veterans Administration. However, as he made his remarks, Clinton asked him, “What do you think should be done with the VA?”

“The thing is, we had four lives in Benghazi killed and your wife tried to cover it up,” said the Marine as the crowd began to boo and become agitated.

As the Marine continued to speak, Clinton attempted to interrupt him.

“Are you going to let me answer?” Clinton asked. “This is America. I get to answer. You listen to me. I heard you.”

“I heard your speech,” Clinton said. “They heard your speech. You listen to me now. Am I allowed to answer? I’m not your commander in chief anymore but if I were, I’d tell you to be more polite and sit down.”

“I wouldn’t listen!” the Marine shouted.

As sheriff’s deputies moved to escort the man out of the building, Clinton still wanted to address the man.

“Can I just saying something? That’s what’s wrong: his mind has been poisoned by lies and he won’t listen,” Clinton said.

Poisoned with lies? And this coming from Mr. “I did not have sex with that woman”? Hello pot?

At any Republican event, people would have been applauding the man’s service, who claimed that he had served 8 years and conducted two tours in Iraq. However, not when it is a Clinton venue. Just for mentioning Benghazi, he was booed.

If that were not enough, the woman filming the Marine jumped up and once again told the truth.

While making her statement, others in the crowd said she was the one lying.

“She lied and she lied to those families. So all those families are liars?” she said as Clinton tried to stop her and a Secret Service agent moved closer to the former president.

“Did she lie?” the woman asked.

“Will you let me answer?” asked Clinton.

“No I’m not afraid because I know you’re going to lie,” she responded.

Here, why don’t we just let Mrs. Clinton answer for herself.

At 1:10 in the video, Clinton knowingly and willfully lies to the American people about the role of a YouTube video in the attack in Benghazi. Yes, she most assuredly lied as the video was deemed to not be relevant to the attack, except as a cover story produced by a Muslim who worked for Eric Holder, period.

However, let’s be clear: neither Bill nor Hillary can be trusted to tell anyone the truth at any time.

As for the Marine and the woman who took a stand in the midst of a room full of socialists and communists, good for them!