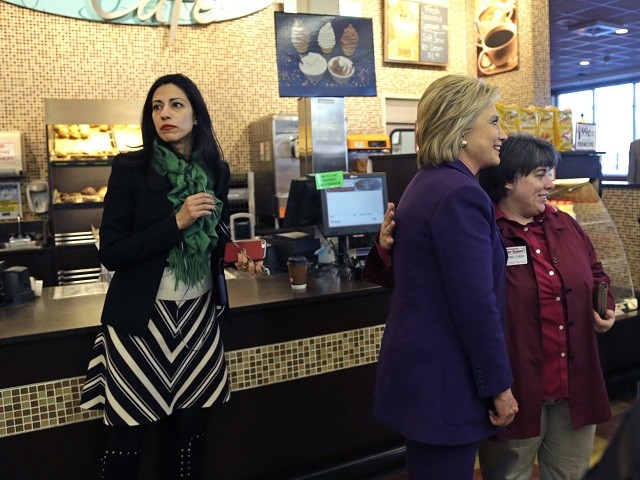 Will the country correct its monumental mistake in the election of Barack Obama and continue its self-destructive spiral by electing this criminal America-hater and her longtime lover, Muslim Brotherhood progeny, Huma Abedin?

TEL AVIV – 1,500 pages of former Secretary of State Hillary Clinton’s emails provide insight into the level of support the U.S. was considering in 2012 for Egypt’s newly elected Muslim Brotherhood government.

On August 30, 2012, Robert D. Hormats, the under-secretary of state for economic affairs, wrote to Clinton’s then-Deputy Chief of Staff Jake Sullivan to update him on a meeting he held with Muslim Brotherhood Deputy Supreme Adviser Khairat al-Shater.

Shater was later sentenced to life imprisonment and then to death for multiple alleged crimes, including inciting violence and financial improprieties.

The email reveals Hormats and other U.S. diplomats discussed  methods of cooperation with Shater, including an increase in American direct foreign investment.

Anne Patterson, Bill Taylor, and I met with Muslim Brotherhood Deputy Supreme Guide Khairat al-Shater. He discussed broad principles of economic development based on 100 large infrastructure projects (over a billion dollars each) as part of Morsi’s Nadah (Renaissance Plan) Plan; ways of cooperating with the US to obtain support for these projects and for SMEs; and his hope for an IMF agreement and increased foreign direct investment from the US, the West, and the Arab world. He also noted that it was a priority for the GOE to build a true democratic system based on human rights and the rule of law.

Patterson, the U.S. Ambassador to Egypt at the time, was known for her repeated engagement with the Muslim Brotherhood. Taylor was the U.S. Special Coordinator for Middle East Transitions; that is, the U.S. envoy to the new leadership that emerged in the wake of the so-called Arab Spring.

Hormats’ meetings with the Muslim Brotherhood were not secret. But the emails reveal the scope of his discussions with the group about possible future investment.

In September 2012, the New York Times reported that Hormats had led a delegation of businesses to Egypt to discuss possible private investment.

That same month, the State Department published a document that received little news media attention. It revealed that in August and September 2012, “Hormats visited Egypt to negotiate possible bilateral debt relief,” but the document did not provide further details.

After the toppling of Egypt’s longtime president Hosni Mubarak, the Muslim Brotherhood’s Muhammad Morsi served as president from June 30, 2012 to July 3, 2013, when he was removed from office amidst widespread protests and a military coup. After Mubarak was removed from office, the Obama administration pledged $1 billion in assistance to bolster Egypt’s transition to democracy.

Clinton and Secretary of Defense Leon Panetta each visited Cairo and met with Morsi during his tenure as president.

The meeting that Hormats describes in the email took place while the U.S. was negotiating an aid package to help relieve Egypt’s debt crisis amid concerns from U.S. lawmakers about funding the Muslim Brotherhood.

The email was sent a week and a half before protesters besieged the U.S. Embassy in Cairo on September 11, 2012, the same day the U.S. Special Mission in Benghazi came under attack.

With research by Brenda J. Elliott.