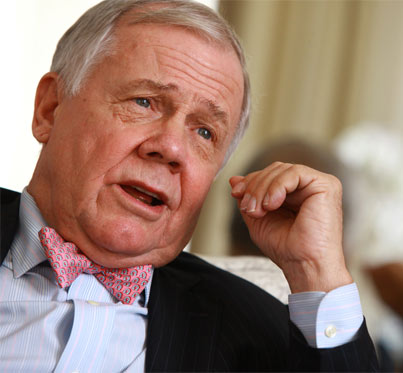 Legendary investor Jim Rogers understands a thing or two about how economies and globally intertwined financial markets work. He’s visited 116 countries and holds a Guinness Book world record. And during the 1970’s he made his billions as the rest of the world fell into recession. So when Jim speaks, it’s probably a good idea to listen what he’s saying.

Based on what’s happening around the world, in his latest interview with Future Money Trends Rogers says we are closer to a serious crisis now than we’ve ever been and urges people to prepare for what comes next.

The markets are telling us something is wrong.

Eventually the market is just going to say to these central bankers, ‘enough is enough – we don’t want your garbage paper anymore.’

Then we’re going to have the real crisis.

In 2015 in the United States, twice as many stocks were down as were up… They were disguised by the fact that a few big companies went up all the time – you know the names, Amazon, Microsoft – those stocks went up. And they hid the fact that the markets were deteriorating underneath.

This year everything is going down…nearly everything. So, we know that the market knows and the market is telling us it’s getting closer and closer.