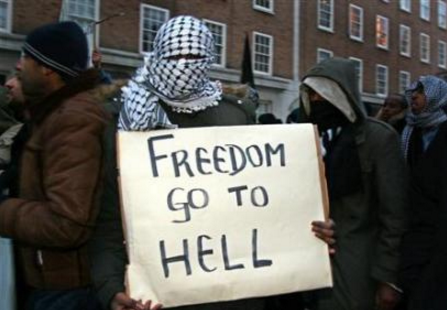 Barack Obama, while campaigning in 2008, called for the creation of a civilian security force to deal with today’s growing national security threats to the roar of cheering crowds. He proclaimed that this force would be better funded and better trained than the U.S. Military. Being a community organizer, Obama certainly knows how to put together such a force, and it seems that, over the years, this is exactly what he has done. Last week, President Obama praised the racial hate group “Black Lives Matter” for their outstanding work in raising legitimate “political grievances.” This is a group that actively hunts down and murders white police officers, claiming to be oppressed by the white majority. For years, our education system has been deliberately teaching students that America is a racist, oppressive nation while instilling in them the tenants of socialism. Is Black Lives Matter the national security force that Obama promised to create?

During the 2014 Ferguson riots, it came to light that ISIS members began recruiting black people into their ranks. They saw the shooting of Michael Brown as a perfect opportunity to highlight the alleged oppression and social injustice that black people live under in the United States. Does this mean that the Black Lives Matter movement is made of Muslim converts being radicalized by ISIS? This is entirely possible, as black people have a long history of converting to Islam. Writing for The Guardian, Richard Reddie states that many black people believe Islam to be their original religion and that conversion offers them the opportunity for spiritual liberation from an oppressive system that intentionally keeps them subjugated. Ironically, this is the same story they continually hear from our higher education system, as well. Could this be a deliberate effort to recruit them into the ranks of Islam, also? Considering our universities are heavily funded with Saudi money, it certainly is a possibility.

Our prison system is another place where one in three black people convert to Islam. This is truly alarming as the Obama Administration has been releasing hardened, violent criminals onto the street on the premise that they are wrongly imprisoned due to an oppressive, racist justice system. Are these criminals converts to Islam? It is entirely possible, as Alton Nolen, the Islamic radical who beheaded an Oklahoma woman at her place of employment, seems to have converted to Islam while serving a prison sentence. There appears to be a deliberate attempt to recruit prisoners into the ranks of Islam, as our government has funded Islamic chaplains in our prisons through various Muslim Brotherhood front groups such as GSISS (The Graduate School of Islamic and Social Sciences) and ISNA (Islamic Society of North America). This has been going on throughout the duration of the Obama presidency.

Since Obama became president, America has been saturated with stories allegedly depicting racial injustice. Obama makes excuses for criminals who burn down cities and murder police officers on the false notion that America is a racist nation; therefore, their actions are justified. Every college in the U.S. teaches the lie of white privilege while deliberately teaching black students that they are oppressed and should organize for power. It is now so far out of hand that there are groups of black students demanding to be segregated from whites. In the mean time, there are Islamic radicals waiting in the shadows seeking to capitalize on their feelings of subjugation, promising liberation from a world of injustice and racial bigotry, when truly they are just recruiting them to be soldiers in a battle for domination, turning them into murderers and away from true spiritual enlightenment. As racial tensions only increase and groups like Black Lives Matter claim a race war is on the horizon, the possibility that there is a deliberate attempt to radicalize young black men to complete Obama’s promised “fundamental transformation” must be considered. The whole system has been turned into one big community organizing effort against America.