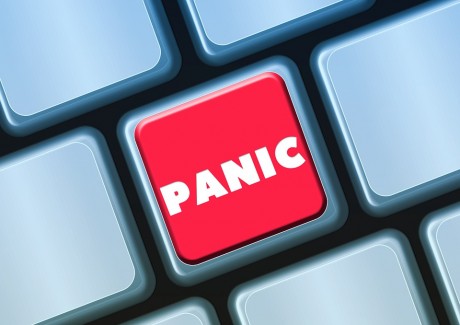 We haven’t seen numbers like these since the last global recession.  I recently wrote about how global trade is imploding all over the planet, and the same thing is true when it comes to manufacturing.  We just learned that manufacturing in China has now been contracting for seven months in a row, and as you will see below, U.S. manufacturing is facing “its toughest period since the global financial crisis”.  Yes, global stocks have bounced back a bit after experiencing dramatic declines during January and the first part of February, and this is something that investors are very happy about.  But that does not mean that the crisis is over.  All bear markets have their ups and downs, and this one will not be any different.  Meanwhile, the cold, hard economic numbers that keep coming in are absolutely screaming that a new global recession is here.

Just consider what is happening in China.  Manufacturing activity continues to implode, and factories are shedding jobs at the fastest pace since the last financial crisis…

China’s official Purchasing Managers’ Index (PMI) stood at 49.0 in February, down from the previous month’s reading of 49.4 and below the 50-point mark that separates growth from contraction on a monthly basis.

A private survey also showed China’s factories shed jobs at the fastest rate in seven years in February, raising doubts about the government’s ability to reduce industry overcapacity this year without triggering a sharp jump in unemployment.

For years, the expansion of the Chinese economy has helped fuel global economic growth.  But now things have shifted dramatically.

At this point, things are already so bad that the Chinese government is admitting that millions of workers are going to lose their jobs at state-controlled industries in China…

China’s premier told visiting U.S. Treasury Secretary Jacob Lew on Monday his government is pressing ahead with painful reforms to shrink bloated coal and steel industries that are a drag on its slowing economy and ruled out devaluing its currency as a short-cut to boosting exports.

Premier Li Keqiang’s comments to Lew on Monday were in line with a joint declaration by financial officials from the Group of 20 biggest rich and developing economies who met over the weekend in Shanghai. They pledged to avoid devaluations to boost sagging trade and urged governments to speed up reforms to boost slowing global growth.

Across all state-controlled industries, as many as six million workers could be out of a job, with almost two million in the coal industry alone.

But it isn’t just China.  Right now manufacturing activity is slowing down literally all over the planet, and this is exactly what we would expect to see if a new global recession had begun.  The following chart and analysis come from Zero Hedge…

As the below table shows, 28 regions have reported so far. Seven saw improvements in their manufacturing sectors in February, twenty recorded a weakening, and India was unchanged. This means that over 70% of the world saw manufacturing sentiment deteriorate in February compared to January. 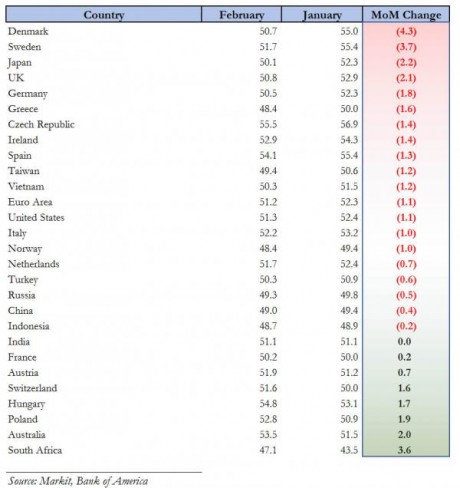 In terms of actual expansion, there were 21 countries in positive territory and 7 in negative. In particular, Greece moved from neutral to contraction territory, while Taiwan dropped below breakeven from expansion.

Unfortunately, most Americans don’t really pay much attention to what is going on in the rest of the world.  For most of us, what really matters is what is happening inside the good ole USA.

And of course the news is not good.  There were more signs of trouble for U.S. manufacturing in the February numbers, and this continues a trend that stretches back well into last year.  The following is what Chris Williamson, the chief economist at Markit, had to say about these numbers…

“The February data add to signs of distress in the US manufacturing economy. Production and order book growth continues to worsen, led by falling exports. Jobs are being added at a slower pace and output prices are dropping at a rate not seen since mid-2012.

“The deterioration in the manufacturing sector’s performance since mid-2014 has broadly tracked the dollar’s rise, which makes US goods more expensive in overseas markets and leads US consumers to favour cheaper imported goods.

“With other headwinds including the downturn in the oil sector, heightened uncertainty due to financial market volatility, global growth worries and growing concerns about the presidential election, it’s no surprise that the manufacturing sector is facing its toughest period since the global financial crisis.“

Over the past couple of decades, the U.S. economy has lost tens of thousands of manufacturing facilities.  We desperately need a manufacturing renaissance – not another manufacturing decline.

As good paying manufacturing jobs have been shipped overseas, they have been replaced by low paying service jobs.  As a result, the middle class is shrinking and the ranks of the poor are exploding.

It is hard to believe, but today more than 45 million Americans are on food stamps, and a significant percentage of those individuals actually have jobs.  They are called “the working poor”, and it is becoming a major crisis in this nation.

And no matter what Obama may say, unemployment remains a major problem in the United States as well.  At this point, unemployment rates in 36 states are higher than they were just before the last recession hit in 2008.

Of course a lot of people are going to look at this article and will point to the stock market gains of the past couple of weeks as evidence that “things are getting better”.  It is this kind of clueless approach that is keeping the American people from coming together on solutions to our problems.

The truth is that the United States has been experiencing economic decline for decades.  Our economic infrastructure has been gutted, the middle class is steadily deteriorating, and we have amassed the biggest pile of debt in the history of the world.

Anyone that believes that things are “just fine” is in a massive state of denial.  Consuming far more wealth than we produce is not a formula for a sustainable economy, and it is just a matter of time before we find this out the hard way.