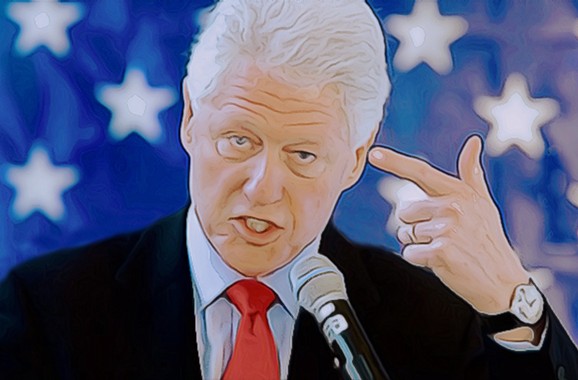 More than 60,000 people are calling for the arrest and prosecution of former president Bill Clinton, alleging he violated election laws by entering multiple polling stations in Boston and other Massachusetts areas on Tuesday. A Change.org petition launched that same evening calls on the state’s attorney general, Maura Healey, to take action against Clinton, though the Secretary of State insists his behavior was lawful.

The petition says the Bill Clinton made a “clear, knowing and egregious violation of the campaign laws to swing an election in a significant way,” alluding to Massachusetts General Laws and procedures that prohibit “[c]ampaigning within 150 feet of a polling station, or in any way interfering with the right to vote.“ According to state voting procedures, “no person shall solicit votes for or against, or otherwise promote or oppose, any person or political party or position on a ballot question, to be voted on at the current election.”

Secretary of State William Galvin told the New York Times his office “had to remind some of our poll workers that even a president can’t go inside and work a polling place. He can go in, but he can’t approach voters.”

He continued: “We just took the extra precaution of telling them because this is not a usual occurrence. You don’t usually get a president doing this.”

WVBC, a local ABC affiliate, reported that Brian McNiff, a spokesperson for Galvin, “clarified that Clinton broke no laws during his visits to the interior of polling places because he was not handing out any flyers or voting materials for Hillary Clinton.”

Clinton also entered polling centers in West Roxbury and Newton, and attended an event outside a polling center in New Bedford. In West Roxbury, Clinton visibly spoke to a poll worker and agreed to take a picture with her, remarking, “As long as we’re not violating any election laws.” McNiffsaid of the New Bedford appearance that “No one was prevented from voting. The city and voters were notified well in advance of the event.”

He admitted that Galvin’s office notified Clinton’s campaign of possible violations. “We have heard about it, and the clerks have been instructed and the campaign has been instructed that 150 feet is the rule.”

Clinton supporter and mayor of Boston, Marty Walsh, declined to acknowledge any illegal activity. Rather, he shook poll workers’ hands with the the former president in West Roxbury. “President Clinton joined Mayor Walsh to thank poll workers in West Roxbury this morning,” a spokesperson for his office said, adding that Clinton did not campaign inside the polling place.

The Massachusetts’ state brass is defending the Clintons in spite of unethical and possibly illegal behavior, and the petition disputes the apparent free pass.

“Bill Clinton was not only electioneering within the boundary. Although the spokesperson for Bill Clinton denies that he was ever inside a polling place, photos and video show him clearly greeting and talking up election workers inside,” it says.

“After being told to refrain from this activity, which is a 3rd degree Voter Violation Felony, for which Clinton indeed must have known the law and chose to violate it, Bill Clinton does not vote in Massachusetts, and would have no other business in a polling station on election day besides campaigning for his wife.”

A spokesman for Clinton directed inquiring CNBC reporters to the WCVB article, where McNiff asserted Bill had committed no wrongdoing. Even if Clinton did not technically violate election laws, it seems apparent his presence at polling centers was intended to promote Hillary’s campaign.

Bernie Sanders supporters and others have raised concerns throughout the campaign cycle regarding the integrity of the process, and the Clintons’ most recent apparent transgression has attracted a great deal of scrutiny. As of Wednesday afternoon, the Change petition calling for Clinton’s arrest and prosecution had attracted over 63,000 signatures, closing in its goal of 75,000.

Though the Clintons have recently been accused of even more serious criminal conduct — including rape and war crimes — they have not faced prosecution.