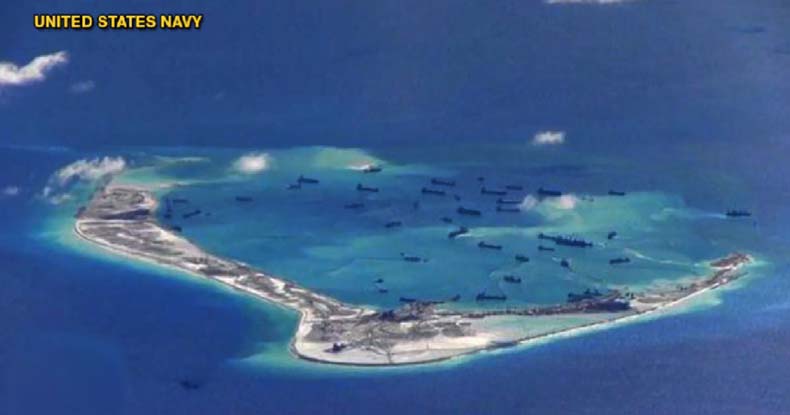 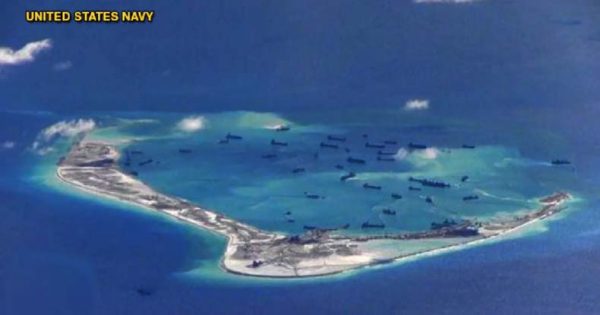 On Thursday, the US Navy announced they dispatched a small armada to the South China Sea. Consisting of the John C. Stennis aircraft carrier, two cruisers, two destroyers, and the 7th Fleet flagship, the US is making their mission clear — we are not scared of kicking off World War III.

Confirmed by the Navy Times, the stand-off has been heating up on both sides. After news in February that the Chinese deployed an advanced surface-to-air missile battery to the Paracel Islands, U.S. Pacific Command head Adm. Harry Harris told lawmakers that China was militarizing the South China Sea.

“In my opinion, China is clearly militarizing the South China Sea,” Harris testified on Feb. 24. “You’d have to believe in a flat Earth to believe otherwise.”

However, China is not the nation sending warships halfway across the globe in a clear attempt to provoke a fight.

While China is no saint, they are not the country with nearly 700 military bases in dozens of countries across the globe who’ve been responsible for the total destruction of multiple nation-states in just the past decade.

The reason the Chinese have shown a military presence in the region is due to the nature of the dispute over who lays claim to the Paracel Islands chain.

The Paracel Islands, also known as Xisha in Chinese and Hoàng Sa in Vietnamese, is a group of islands, reefs, banks and other maritime features in the South China Sea. It is controlled (and occupied) by the People’s Republic of China and also claimed by Taiwan and Vietnam.

This dispute over who lays claim to the region dates back decades, and physical violence has erupted between the disputing parties on multiple occasions as recently as 1974. However, since then, the dispute has remained peaceful — until now.

The US is attempting to claim that the Chinese presence in the region is some new conflict and are touting strawmen such as closed trade routes as a reason for flexing their military sway. But there is no evidence that trade will be affected at all.

No country in their right mind would hinder its ability to export, and China shows no signs of halting exports any time soon.

“The accusation [that China is militarizing the region] can lead to a miscalculation of the situation. If you take a look at the matter closely, it’s the US sending the most advanced aircraft and military vessels to the South China Sea.”

Defense Secretary Ash Carter seems hell bent on escalating the situation. On Tuesday, Carter, in an evident failure of logic and confirming Ying’s statement, warned China to halt their militarization of the region, or the US will further militarize the region.

Backing up Ying’s claims about US militarization, Carter noted that the US is unafraid of increasing military deployments to the Asia-Pacific region and would spend nearly $425 million to pay for more joint military exercises with countries that feel threatened by Beijing.

“China must not pursue militarization in the South China Sea,” Carter said in a speech in San Francisco. “Specific actions will have specific consequences.”

As the global economy teeters on the edge of collapse, the U.S. has ramped up its saber rattling, not only with China but with the Russians as well. While America spends more on war than anyone else in the world, the idea that they can take on China and Russia simultaneously is deadly insane.

Do You Want To See Where This Is Going If Not Stopped? Employees Chase Down & Assault Customer Without A Mask…
February 27th, 2021 Sons of Liberty Media