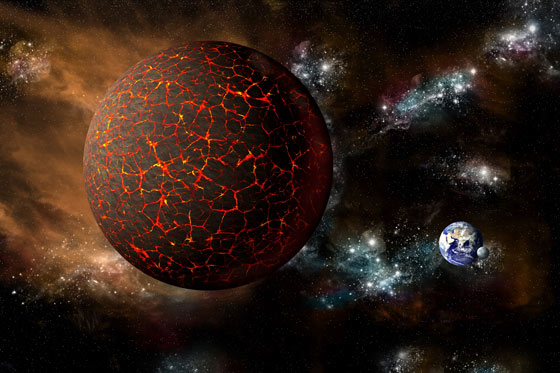 Upon recent admissions by NASA and other officials confirming Planet X is real after all, one must question the validity of the information presented through mainline streams which may actually be an attempt to thwart the populace from discovering the actual approaching system.

“This thing has got seven planets and its own sun,” said an alleged CIA agent who claims to have witnessed the ‘mini solar system’ after intercepting image and data transmissions from the Hubble Space Telescope during his employment with the Central Intelligence Agency.

“I think this thing has a planet like ours circling it. This is its own solar system. We are about to have a solar system come through the middle of our solar system — this can’t be good,” the alleged agent said.

The alleged agent also said that the system will pass Earth from beneath the ecliptic plane at a distance of about twenty-million miles, “sooner than expected,” after achieving “breakaway speed from the sun.”

The alleged agent claims that the government has been monitoring the system for years and that in 2008 it could be seen in high detail using modern equipment.

“This thing is just orange hot. I mean, to tell how hot it is I was told that they estimated between 5 and 10 million degrees.”

The alleged agent said he even witnessed the system’s dust cloud taking on the appearance of “wings” as it rounded the sun, matching ancient tales from history that talk about the crossing planet.

“DCIA guys told me that this pole shift will probably happen from start to finish in around twenty-eight minutes.”

“500 to 1000 foot” tall shock-waves may ruffle the planet as this thing passes, the alleged agent said, also pointing out how it may have an extremely powerful magnetic field.

“I watched it through the Hubble Space Telescope. And when this thing looked like it was across the street the Hubble got cut off and they encrypted it and that was the end of any transmissions we had to watch. And we know that the Hubble, in order to be in the shadow of the Earth, had to be at an angle and so that meant that is was looking downward and this thing was coming up from underneath us. I personally thin this thing is real close to us right now, but that’s just my personal feeling.”

The alleged agent thinks that the planet may “experience a poll shift” when the system passes.

“They have known about this thing forever,” the alleged agent pointed out.

It’s “four or five times the size of Earth.”

“This planet is rolling over to face this thing and when it goes by it’s going to grab our southern pole with it’s northern poll. […] There is going to be a massive earthquake when it locks on to us, as it goes passed us we’re going to follow it right upside-down, the oceans are just going to roaring from poll to poll.”

“We should be preparing and expecting this thing to show up […], the alleged agent said before the transmission cut off.

According to the latest, Planet X researchers and alleged insiders like John Moore maintain the system may pass by Earth around March of 2016.