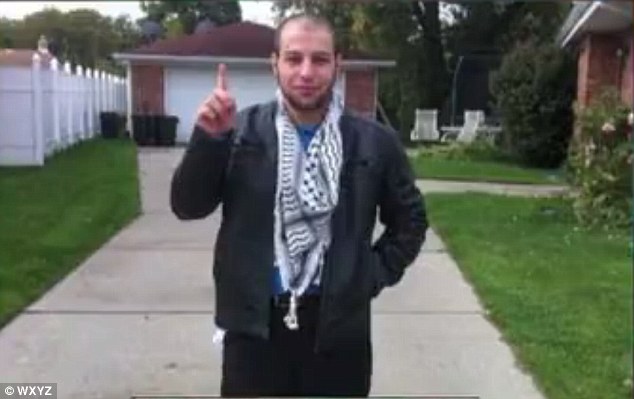 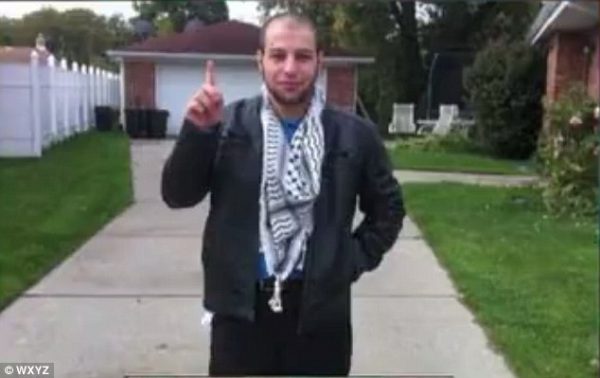 Not only did this Dearborn Muslim plot to shoot up a Detroit church, but he kept a sword in his car and said that it was his “dream to behead someone.” Khalil Abu-Rayyan said he wanted to “burn people alive, tie them up, cut their tongues.”

As for the church shooting, Abu-Rayyan said, “Honestly, I regret not doing it. If I can’t go do jihad at the Middle East I would do a jihad over here.”

But Abu-Rayyan will not be prosecuted for terrorism; not in Dearborn, he won’t. To prosecute him for terrorism would be islamofauxbic. Any time a jihadi gets caught plotting mass murder of the kuffar, it’s the FBI that gets the blame: “entrapment.”

The case against Abu-Rayyan has focused on his alleged threats of violence and has raised questions, including whether the government successfully thwarted Abu-Rayyan’s alleged plan for a terrorist attack on a Metro Detroit church, or whether the FBI’s undercover agent radicalized a vulnerable young man with no criminal past until 2015.

The FBI is being accused of radicalizing this savage. Not the Islamic texts and teachings that incite to jihad, not his Muslim brothers waging holy war in the cause of Islam — the FBI.

Wait, it get worse. The FBI is being criticized for arresting him, as opposed to pursuing “other options,” such as going to the family.

Asked whether they explored other options before arresting Abu-Rayyan, U.S. Attorney spokeswoman Gina Balaya said: “Although intervention with a family is appropriate in some cases, when a defendant poses a specific threat of violence, we need take action that protects public safety.”

Go to the family? The family is usually in on it. Look at San Bernardino. Khalil plotted to shoot up a church. There are no other options but arrest. How can the FBI do its job when it is expected to adhere to sharia law and sanction jihad?

The defense is claiming that Khalil heard a voice inside his head. Yes, Allah’s.

This jihadi is being charged him with two felony counts involving firearms and drugs — but not terrorism.

Khalil Abu-Rayyan allegedly gushed about his fondness for violent acts of terrorism in text message exchanges with an undercover agent and during an in-custody police interview.

Even before he drew the attention of law enforcement in 2015, the 21-year-old Muslim from Dearborn Heights had retweeted, liked and commented on Islamic State propaganda on his Twitter account in 2014, authorities said.

Once face to face with federal investigators in October, authorities say Abu-Rayyan admitted to hearing voices in his head that told him to do terrible things: burn people alive, tie them up, cut their tongues.

“Shooting and death makes me excited. I love to hear people scream and beg. I wish I had my gun,” Abu-Rayyan told the FBI undercover agent in a text message.

Yet Abu-Rayyan’s defense lawyer says his client is no terrorist. Rather, he is a socially awkward pizzeria worker who lives with his parents, smokes marijuana and has no romantic experience with women.

Abu-Rayyan was bragging of jihad and martyrdom to impress a woman, who turned out to be an undercover agent, his lawyer says, adding that black Heritage .22- caliber revolver he was caught carrying illegally is recommended for Boy Scout target shooting, not acts of terrorism.

And he never carried out any of the violent acts he vowed to commit.

Both sides of Abu-Rayyan emerged in a federal courtroom last month in Detroit where prosecutors charged him with two felony counts involving firearms and drugs — but not terrorism.

The case against Abu-Rayyan has focused on his alleged threats of violence and has raised questions, including whether the government successfully thwarted Abu-Rayyan’s alleged plan for a terrorist attack on a Metro Detroit church, or whether the FBI’s undercover agent radicalized a vulnerable young man with no criminal past until 2015.

Prosecutors contend the best place for Abu-Rayyan is behind bars.

According to Assistant U.S. Attorney Ron Waterstreet, Abu-Rayyan had been retweeting, liking and commenting on IS propaganda on his Twitter account that included videos of a Jordanian fighter pilot being burned alive, men executed by being thrown from a high-rise building, the beheading of Christians in Egypt and news of IS victories.

A detention hearing held last month revealed that Abu-Rayyan made multiple threats of violence against the community and said he wanted to kill a police officer who arrested him in Detroit on Oct. 7. Besides the federal case, his arrest also brought charges in Wayne County on possession of marijuana and carrying a concealed weapon.

He boasted of having an AK-47 with plenty of ammunition to shoot up a nearby church, yet police never found such a gun or bullets to go with it.

Asked whether they explored other options before arresting Abu-Rayyan, U.S. Attorney spokeswoman Gina Balaya said: “Although intervention with a family is appropriate in some cases, when a defendant poses a specific threat of violence, we need take action that protects public safety.”

Todd Shanker, Abu-Rayyan’s attorney and a member of the Federal Defender’s Office in Detroit, declined to comment. In court, Shanker said the case raises an interesting point that law enforcement talks about trying to build bonds with the Islamic community in Metro Detroit but don’t always follow through.

“This would have been the perfect time to talk to Ray (his father) and say we’ve seen (Khalil’s) Twitter feed, ask him to stop. Instead, they took advantage of this young man and inserted an undercover,” Shanker said in court.

Peter Henning, a former federal prosecutor and current law professor at Wayne State University, said federal investigators are faced with a series of decisions and judgments when deciding whether to arrest someone under surveillance for making wide-ranging threats, continue to watch them or close the case.

“You have to make a judgment as the agency arresting him. How far do you go in the cooperative? If they think he really poses a threat, you have to be really careful,” Henning said. “The last thing you want to read is a headline in The Detroit News that the government let a shooter go,” Henning said.

“We are operating now … months out from San Bernardino. Those types of event have a ripple effect. There is always this concern. That is a tough call.”

The FBI must meet the requirements of a federal threat statute before it can take action against someone who is making threatening statements, Henning said.

“Those require more than just a statement. You can’t be punished for your thoughts and for what you said and unless there is some basis to back it up,” Henning said. “What they have done is they’ve picked a charge in the vicinity of the conduct, but it doesn’t involve any terrorism or threatening conduct. It’s enough for them to get him on.”

The threats of violence and martyrdom won’t come in at a trial, Henning said, because they would be so prejudicial that it’s unlikely a judge would allow in that kind of evidence.

Prosecutors will focus on convicting Abu-Rayyan of the charges filed against him, Henning said, which should not be too hard to prove.

Evidence against him includes Abu-Rayyan’s own admissions to police that he used marijuana and an ATF form 4473 that asks: “Are you an unlawful user of, or addicted to, marijuana or any depressant, stimulant, narcotic drug, or any other controlled substance?” Abu-Rayyan checked “no” and signed the form before he purchased the .22.

“These are also hard charges to defend. He can’t testify –– well, he can — but if he does then he opens himself to the statements coming in,” Henning said.

Dawud Walid, executive director of the Michigan chapter of the Council on Islamic Relations, said he has been monitoring the court case and has spoken to Abu-Rayyan’s family.

“It is evident to me in speaking to the family that the young man has substance abuse issues and rather than take the route of intervention and social services, they (the government) instead used a young lady as a means of trying to get him to do something,” Walid said.

This is an unfortunate pattern of the FBI, Walid said, when it comes to investigating a person making threats of terrorism. These types of cases involve confidential informants that attempt to bait people into doing things that were not actively discussed, Walid said.

“On the surface, it appears this young man was being enticed to do something through an FBI agent provocateur,” he said. “This is the government attempt of giving us the illusion of making us safer from terrorism when there was no terrorism being plotted. If there was, he would be indicted on it. That’s just it.”

Instead of arresting him, they could have continued to monitor him, Walid said.

“Even if most people find what Abu-Rayyan was looking at despicable, does that allow the federal government to plant an informant to goad them into violent action?” he said.

This is not a civil rights case or a terror case, Walid said, it’s a drug case and “the narrative the government has out there has nothing to do with what he is being charged with.”

“The whole discussion of terrorism linked to dope and a gun are not related. Someone who is a hardcore extremist wouldn’t be a regular pot smoker and chatting up women. He doesn’t fit the profile,” Walid said.

Last week, Abu-Rayyan pleaded guilty to an attempted weapons charge in Wayne County stemming from his Oct. 7 arrest by Detroit police. Sentencing for that case is on March 14.

In his federal case, a trial date of April 19 has already been set. The government has told Abu-Rayyan that if he wants to enter a plea in the case, he must do so by April 6.