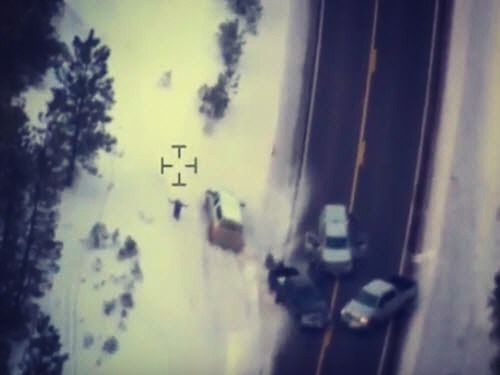 Lavoy Finicum’s first official autopsy has already been released. Finicum was shot at 8 times (six by Oregon State Police and twice by the FBI) and hit three times in the back. His family has reportedly commissioned a second, independent autopsy to confirm these findings.

While Malheur County District Attorney Dan Norris made a statement that“All six shots fired by the Oregon State Police, the three into the truck and the three that struck Mr. Finicum, are justified,” RT reports:

However, the US Department of Justice is investigating an unnamed FBI agent who fired twice at the Arizona rancher, but didn’t report the shots. The four other members of the agent’s Hostage Rescue Team, an elite FBI unit, are also under criminal investigation for potentially helping the shooter cover up the shooting.

The family believes Finicum was murdered.

Now this cell phone footage Shawna Cox shot from inside the vehicle during Finicum’s murder has been released, BUT as Citizens 4 Constitutional Freedom pointed out, “This footage has been cherry-picked for release. Only those parts that the government considers supportive of their own narrative have been released.”

C4CF notes that, “What is shown already disproves some of the claims made by the FBI when they originally released the aerial footage.”

Watch this horror and decide for yourself. Warning: graphic content.