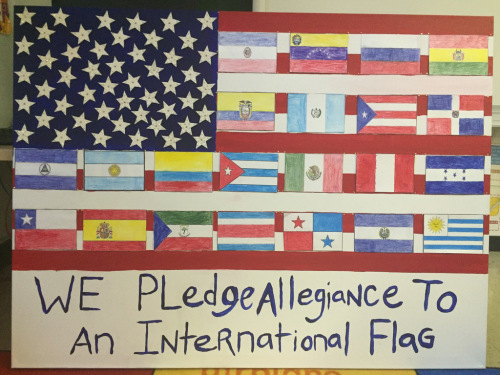 This is New World Order indoctrination on steroids.

The Sean Hannity Show reports on March 4, 2016, that they were told by “a concerned parent” that kindergarten students of PS75, a public school in New York City, recently took part in a class project in which the children fashioned an American flag with the flags of 22 other countries superimposed over the stripes. Below the flag are the words “We pledge allegiance to an International Flag.”

The flag was to be auctioned off as a way to raise funds for the Parent Teacher Association. According to the description offered on the auction site:

The students made a beautifully painted stretched canvas American Flag and then applied flags from all the Spanish speaking countries onto the stripes of the American flag. All the children chose a flag to color using colored pencils and they were glued onto the larger American flag. The stars are cut canvas which are painted and decorated with REAL Swarovski Crystals (gold and crystal colored)!

The fun quote on the bottom is about unity and creating an environment in which everyone is welcome! “We pledge allegiance to an International Flag!” Our dual language classroom strives to be a place that everyone feels welcome!

Although the description claims that the flags are limited to “Spanish speaking countries,” the Russian flag is amongst those that are included.

After the Hannity Show published a post on this travesty, the auction site took down all images and description of the international flag.

PS 75’s superimposition of other countries’ flags onto the stripes of the American flag is a desecration of the flag of the United States of America. 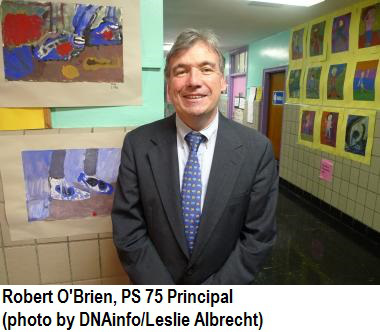