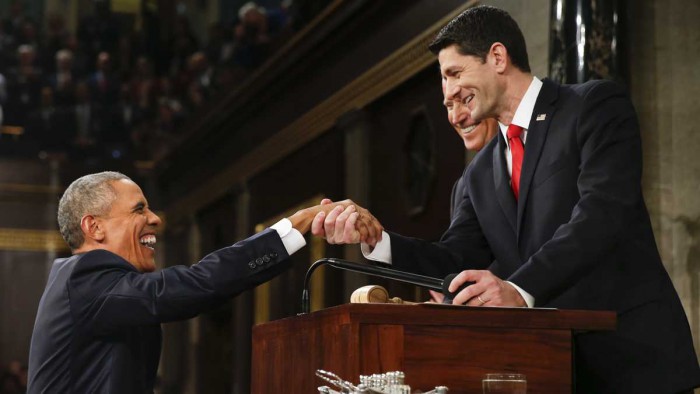 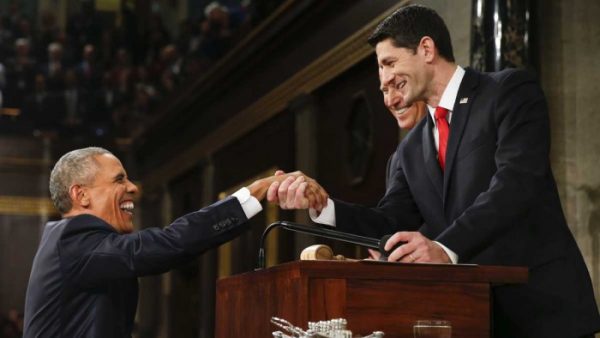 You probably never heard about this but in December, House Speaker Rep. Paul Ryan (R-WI) successfully pushed through Congress his $1.1 trillion omnibus spending bill that will also fund visas for nearly 300,000 more Muslim migrants over the next 12 months.

Breitbart The omnibus bill also funded sanctuary cities, illegal alien tax credits, and changed federal law to allow for a massive increase in low-skilled H-2B workers– an immigration expansion opposed by more than nine in ten GOP voters. Yet at the first gathering of all House Republicans since the omnibus’s passage, Politico reports that GOP lawmakers gave Ryan a standing ovation at the close of this week’s Republican Congressional retreat.

Politico writes: “Retreats like this week’s pow-wow at Baltimore’s Inner Harbor are typically contentious affairs. For the past four years, lawmakers used it as an occasion to scream at John Boehner and Eric Cantor. During their last session here, however, Ryan got a standing ovation as he made commitments to [pursue] big ideas.”

Yet neither John Boehner nor Eric Cantor joined Barack Obama to expand Muslim immigration in to the United States– a distinction which is uniquely Paul Ryan’s.

The Politico piece, entitled “House Republicans Happy For Once,” notes specifically that Republican lawmakers “feel good” about Ryan’s policies– a distinctly different sentiment than the one held by the GOP electorate:

Ryan laid out those policies—which he described as a “bold, pro-growth agenda”—in this week’s Republican address. The policies– which read like the usual Republican clichés espoused throughout Ryan’s career– will focus on five areas: health care, “poverty and opportunity,” “constitutional authority,” national security, and “jobs and economic growth”.

Interestingly, nowhere in Ryan’s priorities is the topic of immigration mentioned– even though Paul Ryan views mass immigration as part of his vision for growing the economy, along with passing President Obama’s unpopular trade policies.

In fact, Ryan even avoided addressing the subject of immigration when discussing his national security priorities. While Ryan notes that Republicans will boost national security by focusing on “building a 21st-century military,” he makes no mention of stopping the large-scale visa issuances to Muslim migrants.

Similarly in his discussion of restoring “Constitutional authority,” Ryan declares that the “president’s executive overreach has undermined the Constitution.” What Ryan fails to mention is that his omnibus spending bill fully funded President Obama’s still fully-operational 2012 executive amnesty for illegal immigrants who allegedly came to the country as minors.

Moreover, Ryan’s office put out a press release detailing that the Republican Party’s agenda of “jobs and economic growth” will focus on “ideas to fix our tax code, rein in the regulatory state, and maximize our energy potential.”

Ryan’s office makes no mention of easing or reversing the unprecedented flow of low-wage labor into American communities, nor did Ryan’s office explain how he plans to “fix our tax code [and] rein in the regulatory state” while importing large numbers of migrants who favor big government policies.

Senator Jeff Sessions (R-AL) and Congressman Dave Brat (R-VA) penned a “Dear Colleague” letter, which was hand-delivered to every Republican Congressional office, arguing against the open border immigration policies Ryan has pushed throughout his career. The lawmakers even referenced one of Ryan’s catch phrases specifically by name:

As our conference prepares to hold its annual policy retreat, we would like to share some thoughts on the one policy that most separates the views of the GOP’s voters from the party’s biggest donors: immigration… If we want to lay out a ‘bold, conservative agenda,’ and demonstrate that we serve the voters—and not the special interests—we should begin by advancing bills to reduce out-of-control immigration. That is the reform our voters want, and that is what we must deliver.

In the fifty years since visa caps were lifted in 1965, the level of immigration in the country has quadrupled—from fewer than 10 million foreign-born residents in 1970 to more than 42 million today. Over the next five decades, Pew Research projects immigration will add another 103 million to the U.S. population—or the population equivalent of 25 cities of Los Angeles. That would mean 100 straight years of uninterrupted record-breaking immigration growth. This autopilot immigration flow is not only extreme, but ahistorical.

Ryan’s omitting immigration from the Republican agenda seems to further underscore the growing divide between the Party’s voter base—who have propelled Donald Trump in the polls as the Party’s frontrunner— and the Republican lawmakers who give Ryan standing ovations on Congressional retreats.

Indeed, Trump has soared in the polls as he continues to campaign on a platform of putting an end to the open borders trade and immigration policies that have been championed by Ryan-Rubio Republicans and their donors.

Ryan’s decision to posture himself as a “counterweight” to Trump seems in keeping with Republican leadership’s longstanding practice of ignoring—and even publicly condemning— the desires of their constituents.

Article reposted with permission from Shoebat.com.