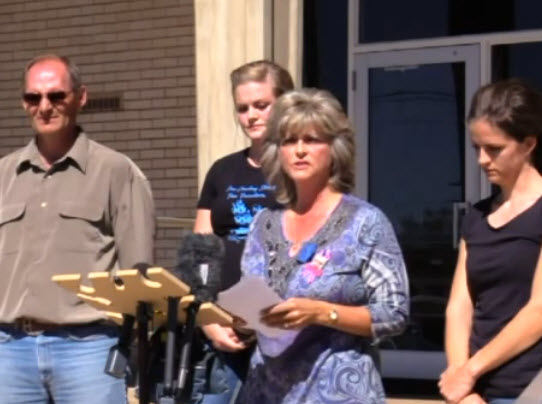 LaVoy’s widow Jeanette Finicum has announced she will be filing a wrongful death lawsuit against Oregon authorities in the shooting death of her husband.

At a press conference, Mrs. Finicum said she and her family “reject the biased, whitewashed findings and conclusion reported yesterday,” and that her legal team has proof the roadblock was a set up.

She also says the agents released a selectively edited video to make it appear as if her husband is reaching for a gun, when in reality he was walking away from his truck with his hands in the air the first time he was shot. Again, all of the gunshot wounds Finicum suffered were found to be in his back.

“I believe, my family believes, my lawyers believe that this evidence will shock the conscience,” she said…

Her view of the video evidence is the same one many of us reported after the shooting happened — that he wasn’t going for a gun but was reaching for a wound where he was hit:

She said investigators left him in the snow for 10 minutes because they knew the three shots into the back killed him.

The DOJ is currently investigating the case even though the U.S. Attorney for the District of Utah already concluded the shooting was “justified”. Why? Because even though the six shots fired by the Oregon State Police, three of which hit Finicum in the back and killed him, where ruled “justified,” two rounds fired off by the FBI and apparently covered up before finally being admitted to, were not.

Mrs. Finicum also said recently released video from inside the car shot by Shawna Cox at the time Finicum was killed proves the whole thing could’ve ended peacefully and law enforcement did not have to kill her husband.